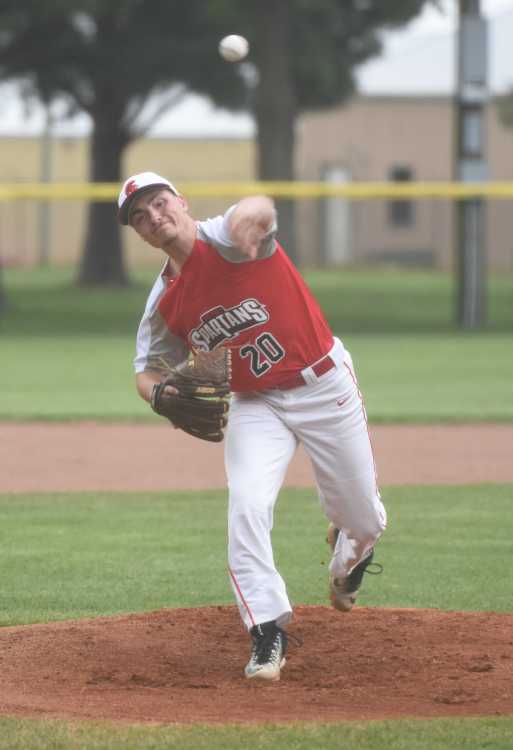 Gage McNeil was in command and the SEMO Spartans built a 5-0 lead against the Sikeston 17-and-under Silver Sox after one inning.

The prospect of a victory for the 19-and-under baseball team appeared likely Monday night.

However, Tropical Depression Cristobal had the final word.

The storm’s outer bands of rain struck Dexter’s East Park and forced a 10-minute rain delay, and a second disruption minutes later caused the game’s suspension with two outs in the bottom of the second inning.

McNeil, a 2020 graduate off Bloomfield High School, pitched two shutout innings with four strikeouts and a walk. The left-hander commanded the strike zone, but his counterpart, Lucas King, could not.

King walked five batters and hit another in two-thirds of an inning. The Silver Sox committed a pair errors that resulted in the Spartans’ first two runs of the game.

After recording the second out on a fly ball to left field, King walked four straight batters with Camden Riley and Mason Keena securing RBIs. King struck leadoff batter Haden Hillis — batting for the second time in the inning — with a pitch, giving the Spartans a 5-0 lead.

McNeil pitched around a one-out walk in the second, and the Spartans went back to work in the bottom half against relief pitcher Mason Slipis, who recorded the final out of the first inning.

With Riley Slusher at bat with one out, the teams were sent to their dugouts for the rain delay. When play resumed, Slusher hit a slow grounder to third base and beat the throw to first for an infield single. McNeil drew a walk, and after Carson Bell struck out, Eli Ford reached on an infield single between the first and second basemen.

The rain picked up again, and the umpires called the game with more bands of rain coming.

The Spartans’ record remained at 0-0-1. Two of their games have been rained out and their season opener against the Charleston 18-and-under Fighting Squirrels ended in a 9-all tie because of an 11 p.m. curfew.

The Spartans are scheduled to host East Prairie at 6 p.m. Thursday at East Park.