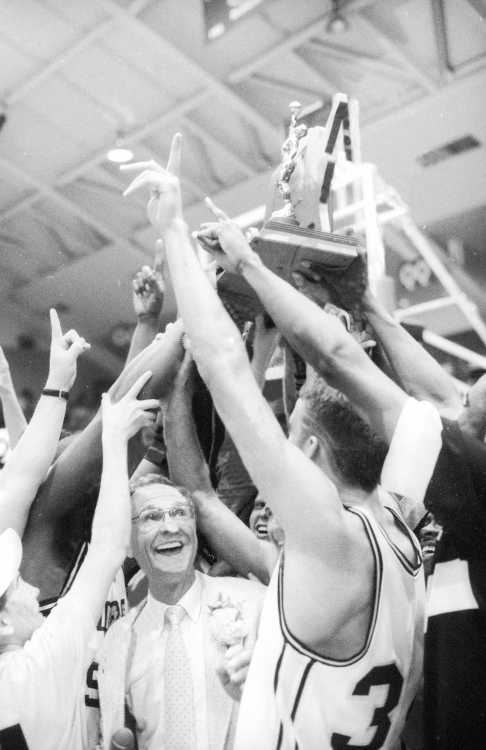 Then DAR Sports Editor Bob Pfeiffer wrote, “If the first 599 wins had been as difficult as the 600th, Three Rivers basketball coach Gene Bess might not be around to enjoy another milestone.”

It ended up foreshadowing the Raiders’ run through the national tournament, where they won four games by a combined 10 points.

FEB. 18
In their second to last game of the regular season, the Raiders lost to John A. Logan 85-68 after being tied at 36 at halftime, putting the Raiders at 26-3 for the season. They didn’t lose again.

“It looked like we were not going to get it together,” Bess said.

Southeast Missouri State was at that game to scout Anthony Beane, who was from Bernie. They were Beane’s No. 1 choice, but after the loss to John A. Logan, SEMO wasn’t very interested in Beane.

“I think he told somebody he called SEMO to play for them. It was where he wanted to play all his life, and it didn’t look like he was going to get recruited very well,” Bess said.

A month later, Beane was a national champion, named Outstanding Small Forward of the Tournament, and SEMO was interested again. Instead, Beane went to Kansas State.

“They took it rather hard,” Bess said of SEMO.

Following the tournament, Bess earned Coach of the Tournament while Shon Peck-Love earned Most Valuable Player.

“I really didn’t think about it much because there were so many other good players,” Peck-Love said after the tournament. “We even had some other guys on our team like Brian Price and Anthony Beane that could have won it ... I’m really happy with it, though. It was just a great way to go out.”

MARCH 5 • REGION CHAMPIONSHIP • THREE RIVERS 76, MOBERLY AREA 65
It was the fourth time that season the Raiders beat the Greyhounds. Moberly Area’s 65 points were the fourth-fewest scored against Three Rivers that season.

“It was a typical Moberly-Three Rivers game,” Bess said. “It was 40 minutes of war, but our kids hung in there and overcame some problems along the way and came out with a great ballgame.”

It turned out to be a blessing as the Raiders shot 64 percent on two-pointers and 48 percent on 3-pointers.

“We’ve got some good shooters and all we need to do is pass the ball better to get some shots,” Bess said after the game. “We did hit some very big shots, though.”

Helped by 22 Three Rivers turnovers, Daytona cut a 13-point deficit in the second half to three points with 3:39 left in the game when Wimmer connected with a 3 off an inbounds pass.

After the Scots made a pair of free throws, Eric Schweain made another 3 for the Raiders, one of seven in the second half.

The Raiders made their final 13 free-throw attempts and kept at least a five-point lead the rest of the game.

“It was really frustrating because we’d get close and they would hit a 3,” Daytona’s William Moore said after the game.

Beane led Three Rivers with 29 points, Peck-Love had 17, Schweain had 15 and Belvis Noland had 12.

MARCH 18 • Quarterfinals • THREE RIVERS 102, SULLIVAN 99
Noland spent much of the second half on the bench in foul trouble but had key back-to-back plays to help lift the Raiders.

Down a point with 3:06 left in the game, Noland tried for an offensive rebound off a missed free throw. Instead of gathering the ball, it bounced off his hand and into the basket to give Three Rivers the lead.

“When I saw it go in I just said to myself, ‘Thank you, Jesus,’” Noland said after the game.

Noland then picked off a Sullivan pass and cruised in for the uncontested dunk.

The Executives had a chance to tie the game with 8 seconds left and trailing 102-99, but their long 3 bounced off the rim as time expired.

“Our kids had plenty of chances to fold, but we have to be proud of them because they sucked it up and hung in there,” Bess said after the game.

Peck-Love had 27 points for the Raiders while Noland had 23, Price got 19 and Beane had 13. Three Rivers shot 60 percent overall and 70 percent on its two-point attempts.

MARCH 20 • Semifinals • THREE RIVERS 76, SOUTHERN IDAHO 74
The Raiders trailed Southern Idaho by 21 points at halftime. Bess got on his guys in the locker room, saying the sophomores didn’t need to go out like this.

In the stands among the 300-some Raider fans at the game, Blackburn saw signs that said, “Raiders don’t quit.”

“I think that helped get us going and we kind of caught (Southern Idaho) by surprise with our 3-point shooting,” Blackburn said after the game.

Blackburn made a 3, Noland scored on an offensive rebound, then Blackburn took an elbow to the nose that left him bloody. He still returned to hit two more 3s.

The Raiders got a five-second call on an inbounds pass, and Peck-Love got a bucket off the turnover to put Three Rivers ahead by five with 29 seconds left. Beane then made two free throws with 6 seconds left to wrap up the game.

“You can’t teach the kind of character we showed in the second half,” Bess said after the game. “We won’t take credit for that. We may foster it, but you just have to get in games like this to know how they’ll react. When you make a comeback like this, you have to give a lot of the credit to the kids.”

Peck-Love led the Raiders with 17 points, Beane had 13, Blackburn got 12, while Noland and Price each had 10. Three Rivers was 16 for 29 shooting in the second half and 8 for 16 on 3-pointers in the second half.

MARCH 21 • National Championship • THREE RIVERS 78, BUTLER COUNTY 77
With 27 seconds left and the Raiders down by two, it was Beane, the kid from Bernie, who broke a 1 for 10 slump with a 3-pointer.

Price stripped the ball from Butler County on the following possession but lost it out of bounds, and the Grizzlies had possession under the basket with three seconds left.

It was the second day in a row Butler County was in this position. In the semifinals, it passed inside to 6-foot, 7-inch Cleveland Jackson, who scored with 2 seconds left to beat Vincennes.

But Jackson had fouled out with 2 1/2 minutes left against the Raiders.

Bess followed a Butler County timeout with one of his own and subbed in Wimmer, a long-armed 6-7 freshman.

“We knew they wanted to lob, but we took that away from them. We also knew their second man was (guard Tony Nelson) and we just wanted to get someone out to check him,” Bess said after the game.

Wimmer bit on Nelson’s pump fake and flew by, but recovered to make the game-winning block.

“I just swung at it as hard as I could and hit it,” Wimmer said.

There were eight lead changes and 17 ties. The Raiders’ largest lead was six points during the first half, while Butler County never got ahead by more than four points.

Price didn’t miss in front of 7,000 people, going 9 for 9 and 3 for 3 on free throws for a team-high 21 points. Peck-Love added 19 points after averaging 20 points per game for the tournament, and Noland added 16 points.

“I remember 1979, but it doesn’t compare to this,” Bess said at the time. “This is one of the best feelings I’ve ever had because we really had to work in all four games here. All four were very, very close.

“We’ve got to really be proud of our kids, because there were so many times in the tournament that they could have folded. I love these guys dearly. The last three years I’ve thoroughly enjoyed coaching because I’ve worked with some fabulous kids.”