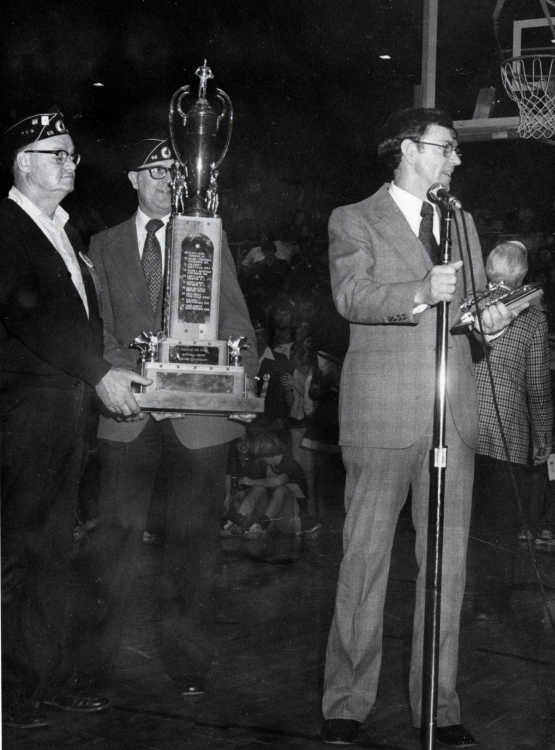 In late August 1978, Three Rivers Assistant coach Herb Slate left the Raiders after one season with the team to be a full-time recruiter at St. Louis University. Three Rivers was coming off a third-place finish in the national tournament, the Billikens needed someone who could recruit, and that was Slate. But before he left, he put together one of the great recruiting classes in Three Rivers history.

“He was from down there (near Memphis), and he knew who to get players off of,” said Gene Bess, who recently retired after 50 seasons and 1,300 wins coaching the Raiders. “Those three players he brought in (Marvin “Moon’ McCrary, Robert Kirby and Milton Woodley) knew what to expect. It is the best job recruiting I could ever imagine ... He was really on top of the game, Herb Slate was.”

Of course, the media didn’t know much about the incoming freshman class. All they knew was that the Raiders were returning just two sophomores in Syl James and Sam Weaver. The DAR wrote Three Rivers would barely win more games than it lost. 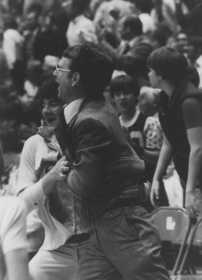 After Three Rivers’ season-opening 95-58 win against Southern Baptist (Ark.), Bess said, “I think we’ve got potential. We just need some games under our belt.”

The Raiders went on to win the national championship and afterward, grabbed then staff writer and future managing editor Stan Berry, who retired two years ago, and were about to throw him in the hotel swimming pool.

Just before the count of three, Bess yelled for them to stop, but only half of the team heard it, and Berry ended up bouncing off the side of the pool and into the water.

DEC. 16 • THREE RIVERS 88, LEWIS & CLARK 44
Three Rivers easily beat Lewis & Clark to give Bess his 200th win, but it was hard for the 43-year-old coach to manage many smiles. About three hours before game time, Bess’ father-in-law, Fred McCann, died.

“He and I were real close,” Bess said. “He would have been proud of what happened tonight.”

Bess went on to say that McCann had been critically ill, and his death was expected.

Then DAR Sports Editor Bob Gray announced to the crowd with 5 minutes still left in the game, that Bess would be presented with a plaque after the game commemorating 200 wins.

“I was awfully flippant after the first 100 wins,” Bess said. “This second 100 is a little different, though. I’ve had some awfully good assistant coaches, Gary Holland, Herb Slate and Roger Pattillo. Gary was here tonight. I wish Herb could have been here, too. He’s responsible for recruiting many of the players we’ve got this year.

“Through the years I’ve had a lot of good players. I wish they could have been here too.”

“I don’t think they ever thought they weren’t going to win a game. They were some real positive thinkers,” Bess said of the Raiders in a recent interview.

The national rankings were released hours before the game, and the Raiders had risen from fifth to fourth while Paducah, which had the same 24-2 record as the Raiders, dropped from 10th to 12th.

After the game, the Three Rivers student bus stopped at a hamburger joint in Paducah. The diner owner finally had to call the police because Paducah fans kept driving by and hurling taunts and insults at the Poplar Bluffians.

Three police vehicles stood by to keep the peace as Poplar Bluff residents finished their meals and got back on the bus.

MARCH 9 • THREE RIVERS 2, STATE FAIR 1
Back when the Region XVI championship was a best-of-three series, the Raiders lost game one to State Fair 58-57 before winning game two 62-38 and game three 79-61.

Three Rivers was going to the national tournament for the second year in a row and for the fourth time under coach Bess.

For their reward, they had to face the top-ranked team in the country, the Region XV winner Westchester (N.Y.). Within hours of winning their own region title, Bess and Pattillo were on a plane to New York to do some scouting.

Around this same time, someone broke of the glass backboards at the Sears Youth Center, where the Raiders practiced. It wasn’t one of the Raiders who broke it, but now they were heading into the national tournament, the top-ranked team in the country looming, with only one goal to practice on.

MARCH 21 National Tournament, first round • THREE RIVERS 68, WESTCHESTER 64
Robert Kirby and Mark Guethle had back-to-back dunks in the final 19 seconds of the game to clinch a 68-64 win for the Raiders, eliminating top-ranked Westchester.

With the score tied late, the Raiders beat the Westchester press, and Pat Niemczyk passed to Kirby for a dunk.

Then Niemczyk poked away the ball as Westchester’s Mike Kelly crossed halfcourt, scooped it up, flipped the ball to Guthle, and the kids from Bell City and Dexter combined for a clutch dunk.

MARCH 22 Quarterfinals • THREE RIVERS 110, COFFEYVILLE 81
The gym was near capacity. Fans packed the stands to watch the home state team Coffeyville (Kan.) take on the Raiders, who had just knocked off the top team in the country with a pair of spectacular dunks. Most of those fans were gone with 6 minutes left in the game.

The Raiders ran through Coffeyville in the 29-point win. Weaver led Three Rivers with 25 points. McCrary had 21, Kirby had 18, and Niemczyk and Dale Purnell each had 14.

It took everything the Raiders had in the tank to outlast Nolan Richardson’s Western Texas squad in a 109-103, double OT barnburner.

“The morning after the Western Texas game, those guys were so tired they couldn’t hardly shoot out there in warmup,” Bess said. “We were gassed. I think it is a great credit to these players. They were winners.”

The next season, Richardson went undefeated before leaving for Tulsa, where he coached until 1985, and then Arkansas until 2002.

Bess recalls Richardson encouraging him to take some of his players with him to a major school in a package deal like Richardson did. But Bess said he always felt an ethical responsibility to the people who recruited his players.

MARCH 24 National Championship • THREE RIVERS 60, MERCER 59 OT
The Raiders shot 32 percent in the first half and were down by double-digits heading into the locker room when the Three Rivers cheerleaders led the Raider faithful in a chant of “Raiders don’t quit, Raiders don’t quit.”

With 13 seconds left in the game, Mercer’s Daryl Devero fouled out, and No. 54 John Rauchut subbed in for him.

However, Mercer head coach Arch Freeman, who played a short bench, had a different number for the rarely used Rauchut in the roster Freeman gave the official scorer.

After much discussion, the referees granted the technical foul.

“I always felt like (Bess) was blessed,” recalled Brian Bess, who will take over the program. “Who would have thought that the coach didn’t check the book or didn’t know that his eighth man’s number had changed and didn’t have the right number in the book. That’s just something you don’t think about.”

Kirby tied the game with his one-and-one from the original foul, and Weaver missed the technical free throw.

The Raiders got possession following the technical, and Milton Woodley was fouled with 10 seconds left. He made both free throws to put the Raiders ahead.

Mercer’s Jeff Rocke missed his shot to tie the game but was fouled by Guethle on the rebound. Rocke made the first free throw, making him 8 for 11 from the line up to that point.

Bess wasn’t proud of it, but with the Raiders up by one, one second on the clock and Rocke shooting one free throw, Bess called on the good Lord to help the Raiders any way he could.

Bess was almost certain the Raiders were going to double overtime for the second day in a row. But the second shot bounced off the front of the rim, and the Raiders won their first national championship.

The Raiders drew six charges in the championship, three from Guethle, two by James, and one from Woodley. Bess still remembers the refs denying Guethle a call for a fourth charge.

After the season, Bess interviewed for the University of Missouri-St. Louis coaching position to replace Chuck Smith, who was retiring. Bess told UMSL after the interview that he was no longer interested.

Bess said he lost interest when he found out he would be a one-person staff at UMSL.

It was the only job Bess applied for that year. The year prior, he applied for the Southwest Baptist job after its coach, Howard Garrett, took a job as assistant principal at Poplar Bluff Senior High School.

“I can’t visualize ever having a year I enjoyed more than this one,” Bess said at the time. “Things just fell into place so well here it might be a sign that it’s time for me to go after a more challenging situation.

“I’m working here and actively planning for next year, which I would do anyway. I always try to leave a job better than when I came in.”