The Bess’ family business is basketball 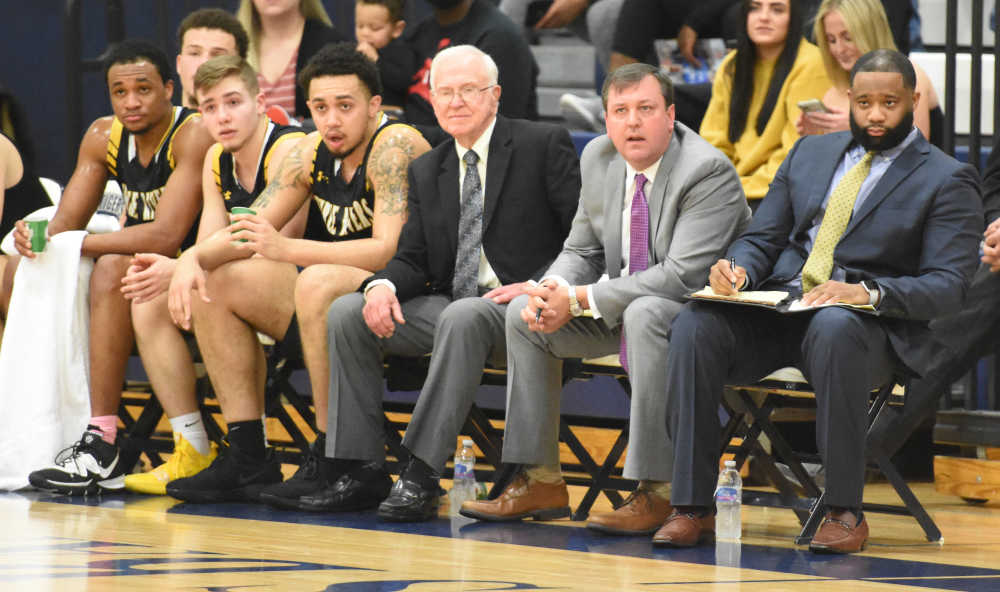 The Three Rivers men's basketball bench looks on during the Region XVI Tournament at Lincoln University in Jefferson City, Mo. on Feb. 28, 2020.

In 1993, Gene Bess decided to hire his son as his new assistant coach.

Gene says his career was extended by a good 20 years, but more importantly, father and son have gotten to spend nearly every day together.

“I feel like I was totally blessed to get him. When he left here and went and played two years and came back, I raised him, got him back, and he’s been with me (ever since),” Gene said.

Added Brian, “I got to spend more time with my parents and with my family. There were a lot of positives, but it probably wasn’t all rosy as it might appear from the outside. There were times that he would get on me.” 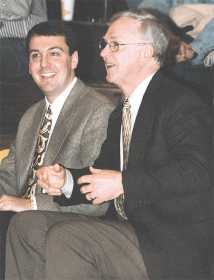 From left, Brian Bess and Gene Bess share a laugh on the bench during a game at the Bess Activity Center in this March 2001 photo.

Hiring his son could have been construed as a questionable decision at the time. Three Rivers won the national championship in 1992. Brian was fresh out of college and maybe a year older than current Dexter coach Chad Allen, who was a sophomore with Three Rivers at the time. Brian wasn’t the only candidate for the job and remembers accusations of nepotism.

Then Three Rivers reached the national championship, their third trip to the final four in five years, and lost to Hutchinson (Kan.) 78-74 in the final.

“That answered a lot of the questions,” Brian said.

Bess, who was considering retiring back then because of hearing problems, knew his son had an excellent feel for the game and an excellent ability to focus. Fans tell them they’re a lot alike when they’re coaching on the court, shouting directions, working the refs. Behind the scenes, their differences make them better.

“I never did think that he and I agreed on a lot and felt the same way a lot about things, and that was good. If we agreed, we’d only need one of us. I always want his input on basketball situations. That was always helpful for me, for him to be around,” Gene said. “He was there to help me through the situations where maybe I was not hearing the game real well. He has extended my career for many years, so I’ve been blessed.”

When asked about his success, Gene is quick to highlight those around him, past and present, on the court and behind the scenes. It’s part of his humble personality, but there’s a lot of truth to it.

“I probably have a gift of delegating authority. The good Lord has blessed me on a continuous basis,” Gene said.

Added Brian, “He has a gift of making Willie (Hilburn) feel like he’s irreplaceable, making (Bryan) Sherrer and I feel like what a great job we’re doing, making Shoopy feel like he’s a great bus driver, Costas (Papanicolaou) like he’s a great trainer, (Tim) Hager is the best Voice of the Raiders. He has such a gift of making people feel like they’re important, that you’re doing a good job and you want to keep doing a good job. It’s probably a teachable moment for all of us to figure out how to be encouragers.”

Those acts of delegating authority increased in recent years. Bess has never been a big fan of the internet, doesn’t own a cell phone, and dealt with health troubles the past few seasons. But mentally, he was steadfastly focused on making his team great clear up until his final game. All last year, Bess was watching game tape, as usual, searching for new drills, different ways to teach something, get the players to buy in, get back to the national tournament. The losses, after 50 years at Three Rivers, still bothered him.

“I always said that if I got to the point where it didn’t really bother me, I’d get out,” Gene said.

Added Brian, “So that never happened.”

In the regular season, the Raiders lost to Moberly Area by 35 and 28 points, then by just seven in the Region XVI semifinals.

In semifinals, the Raiders led early in the second half before Moberly Area, with under 10 minutes to play, went on a 15-4 run to take the first double-digit lead of the game. Three Rivers responded with a 9-0 run to cut the lead to six points, but with 15 seconds left, it wasn’t enough. The Greyhounds earned the No. 16 seed in the national tournament, which was canceled because of the COVID-19 pandemic.

Gene said the Raiders were close to being really good, maybe just two or three weeks away.

“I’ve been extremely blessed. I couldn’t have written it any better,” Gene said. “The ol’ physical aspects of it have really factored in.”

Editor's note: This story appears in a special section in the Saturday, June 6, 2020 edition of the Daily American Republic, honoring the career of Gene Bess, who recently retired as the men's basketball coach at Three Rivers College after 50 seasons.