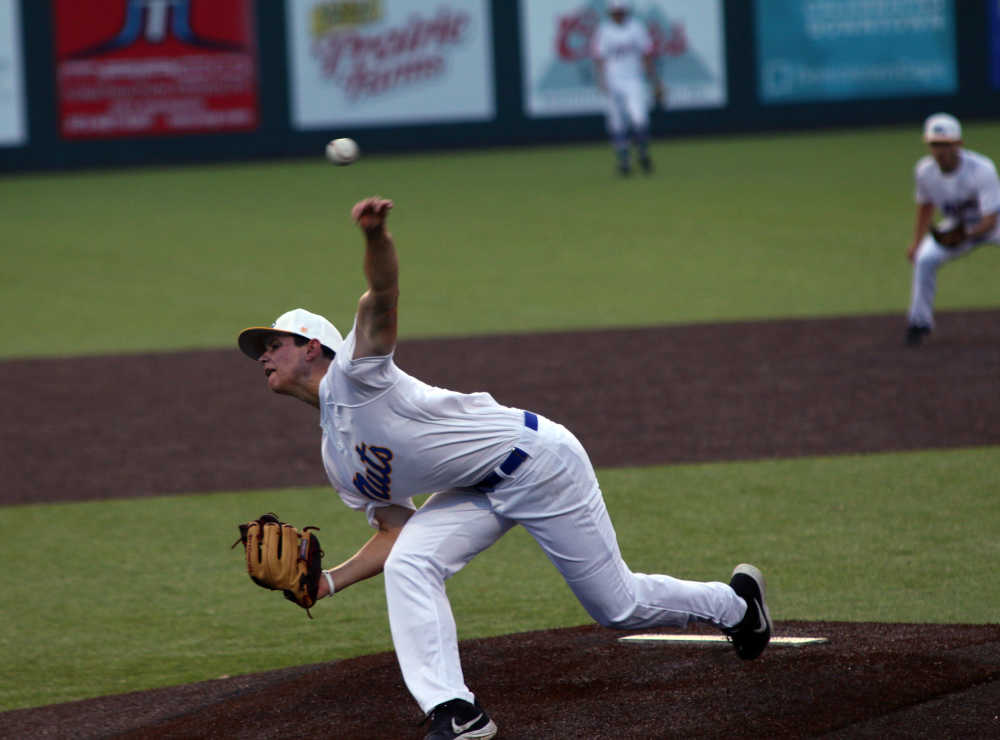 Luke Nichols toed the slab to start the game and was nothing short of excellent, in the Fighting Squirrels 4-1 win on the first day of the COVID-19 Baseball Showcase.

In his three innings of work, the hurler did not allow a hit or run. He yielded two walks and struck out six, and was continually keeping the Bulls off-balance.

After completing his three innings of work, Dawson Crawford relived Nichols and continued the trend with a good outing in his own right. He threw 1 2/3 innings, giving up two hits, one run — a home run to Jackson’s Quinton Dacus — walked one batter and struck out two.

Anthony Klein would then finish the game for Charleston and did so in impressive fashion.

In 1 1/3 innings, Klein gave up one hit, while striking out four batters before the game ended due to the two-hour time limit.

Without a high school season, Charleston head coach Michael Minner knew that pitching might have the edge over hitting.

“That's just one of the things that we know,” Minner said. “I thought we did a really good job of mixing it up; we made the plays when we needed to, but we had a bunch of strikeouts. It was a good opening night. That's a good baseball team — what a great way to start the season.

Not having many chances to score was a problem for the Bulls.

In the first inning, East Carter’s Dalton Rudd led the game off with a walk. Later, he stole second base, before getting caught between second and third on a pickoff.

The same start happened again in the second inning as well. Notre Dame’s Austin Gast led the inning off with a walk, but Nichols managed to strike out the side to end any threat that the Bulls were thinking of having.

Two innings later, Dacus found a way to create a run for his team, as he put the Bulls on the scoreboard on one swing of the bat, as he drilled a home run to left field in the top of the fourth.

Sikeston’s Nolan Self would then start, what looked to be a rally for the Bulls, as he reached on a single and Gast was hit by a pitch in back-to-back plate appearances, but the Charleston pitching staff still managed to work around it. Crawford struck out Richland’s Jack Bell and Woodland’s Rafe Johnson to end the frame.

Whatever the Bulls tried, Charleston’s pitchers had an answer.

“They threw three great pitchers at us,” Missouri Bulls head coach Neil Johnson said. “When you see three pitchers like that come at you anywhere, it's going to be a tough game, no matter what it is. Kudos to them, they got some arms; they got great arms. They hit their spots and locations and threw us off a little bit — the first tournament of the year that we've seen pitching like that.”

Timely hitting also proved to be a difference in the game.

Charleston scored four runs in the third inning and were the only runs they needed to come away with the victory.

After back-to-back groundouts to start the frame, Justin Moses drew a walk, while Brayden Eftink hit a pop fly that looked to close the inning for the Fighting Squirrels.

A trio of Bulls eyed the ball, and as it came down, no one could identify it, allowing it to drop, and both Moses and Eftink to move into scoring position.

Hunter Hiett then gave Charleston a 2-0 lead, after hitting a single to drive in both runners.

Then, after back-to-back walks that loaded the bases, Chase Crosnoe added on two more runs, on a single of his own, to push the lead out to 4-0.

Overall, Minner was pleased with how his team performed.

“We had some guys on-base, and we hit a couple of balls at them, and they got out of the innings,” Minner said. “Then, of course, we took advantage of a dropped pop-up. It was a tight spot. I was super pleased tonight. I thought we got them on-and-off the field well. I thought we played the game the right way, and we're going to continue to get better — that's our ultimate goal right now. We're not looking at wins and losses; we're looking to make these guys better baseball players.

“After what we've been through, it was amazing to get back on the field, and so that's a big thing for the kids, and this is a sign that normalcy is coming back hopefully. So, I was super pleased to be apart of that tonight."