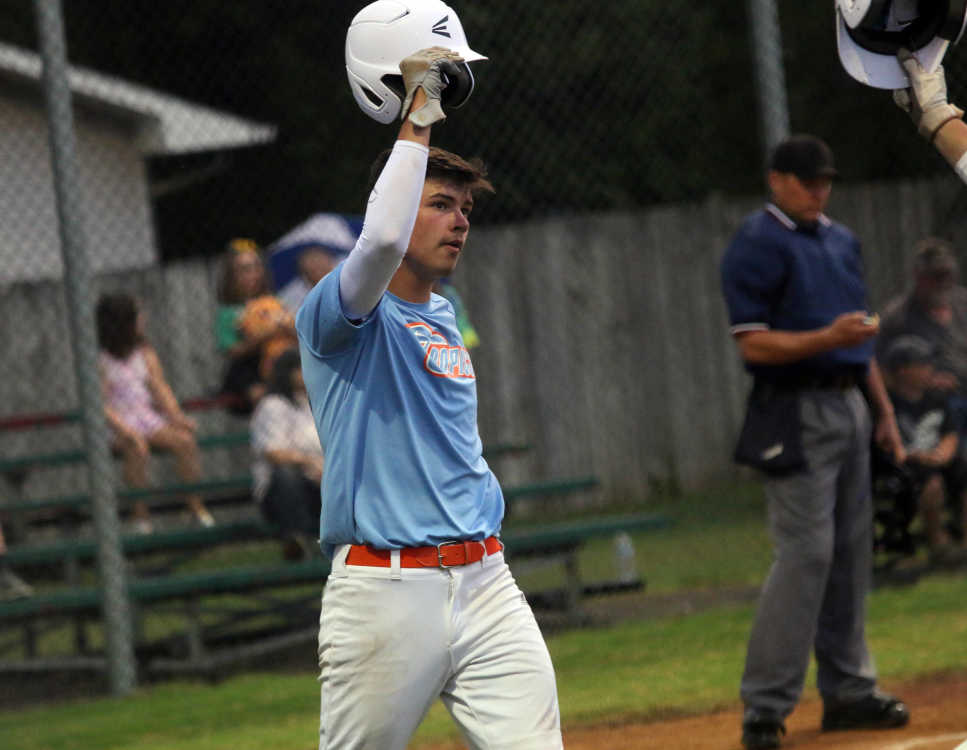 NEW MADRID, Mo. — Mother Nature was on the Southeast Tropics’ side Wednesday evening against New Madrid.

After New Madrid took an 8-7 lead on a two-out single by Cam Ellis that scored a pair of runs, rain started to pour down at New Madrid Eagle Park, forcing the game to stop.

The weather was the best thing at the time for the Tropics, as they used that intermission to rest and recoup, in their 19-8 win.

“Biggest thing we talked about was that we need to play at our level of baseball,” Tropics head coach Dustin Schwartz said. “We’ve got some of the best talent in this area; it’s sometimes easy to slack off. This was our fifth game in three days, and we got a whole weekend coming up. I know some of them were a little out of it, but I think when we looked up, and we said, ‘We’re not where we need to be,’ we talked to them, but the guys put it on themselves.

“They said, ‘We’re ready to play ball,’ and they came out and did exactly what we needed them to do.”

Once play resumed, the Tropics came out with a different kind of energy and retook the lead quickly.

Oran’s Ty Johnson drew a walk to start the rally and eventually scored the game-tying run after a single by Chaffee’s Brennan Fowler.

Alec Brown — also a Chaffee Red Devil — then gave the Tropics the go-ahead run, on a sacrifice fly, that plated Kelly’s Drew Dirnberger, and from that point, the game started to get out of hand.

Southeast added 10 more runs, scoring 12 unanswered runs after the delay, and showed why they were the defending state champions.

In the fifth, New Madrid walked the bases loaded, before Dirnberger was hit by a pitch to score fellow Kelly teammate Bryce Morgan and grow the Tropics lead to 10-8.

However, New Madrid made a threat in the bottom half of the inning, after Jace Robinson started the frame by reaching on a one-out walk.

Robinson would then swipe second base to put himself into scoring position, before advancing 90 feet from home after Ethan Moore grounded out. That would be all that New Madrid would accomplish in the frame, though, as Ellis struck out swinging to end it.

Once the threat subsided, the floodgates opened up for the Tropics. They scored nine runs in the next two innings.

In the sixth, former Kelly Hawk Peyton Eftink started the onslaught with a walk. Then, after another walk — this one credited to Neelyville’s Parker Jeffries — and a wild pitch that pushed both runners to third and second, respectively, former New Madrid Eagle Gavin Bond, made it a three-run contest.

Bond hit an RBI single that scored Eftink and advanced Jeffries 90 feet away from home, which allowed former Kelly Hawk Grant Menz to do some damage of his own.

Menz — who was struggling at the plate — drove in a pair of runs on a double, to bust the game open and make it 13-8.

Even with a comfortable cushion, the Tropics still added on insurance, and Schwartz said that with the talent on the roster, that runs can come quickly.

“When we start rolling, it’s like a snowball for us on the offensive side,” Schwartz said. “When we start hitting, it’s contagious, and we can string together big innings left-and-right.”

Capitalizing when they needed to the most was what separated both teams, and the result on the scoreboard.

Head coach Garrison Keene said that he told his team that they played “two different ballgames,” which is what he didn’t want to happen.

“Beforehand, we had all the momentum,” Keene said. “Taking good at-bats, pitchers throwing strikes, pitchers attacking the zone, and even if we missed the zone, they were good misses. Then, after the rain delay, everybody kind of lost focus, lost momentum, and the momentum’s expected after you sit for 30 minutes, but we came back, and it wasn’t the same team.”