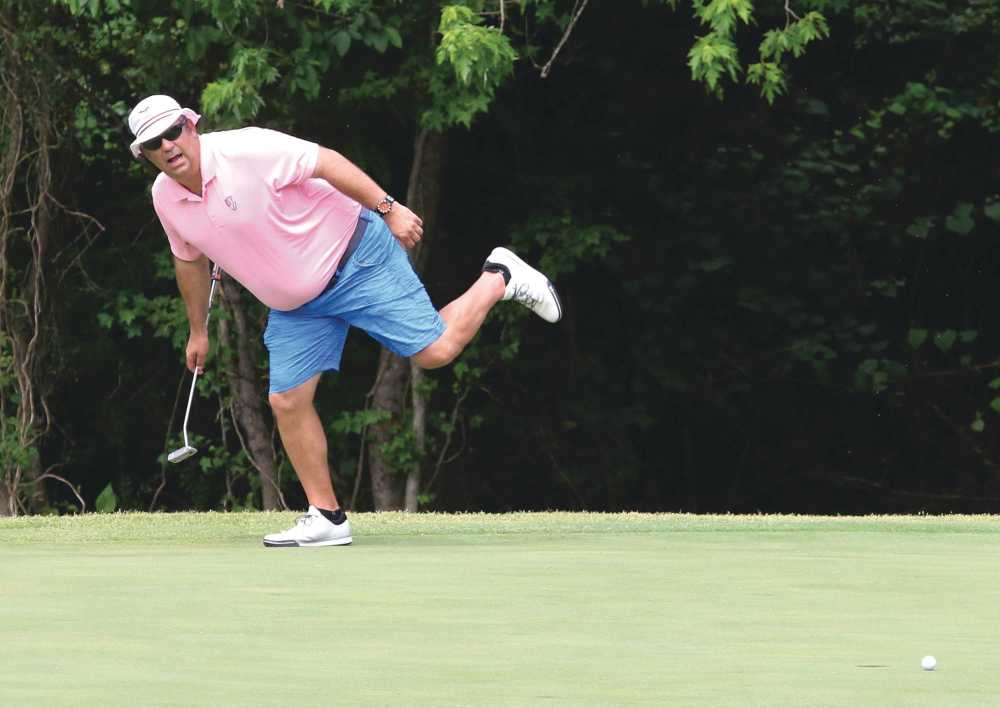 Brevin Giebler, of Cape Girardeau, Mo., watches his putt on the eighth green at Westwood Hills Country Club during a qualifier for the Missouri Amateur on Wednesday, June 3, 2020, in Poplar Bluff, Mo.
DAR/Brian Rosener
Order this photo

POPLAR BLUFF — Brad Thielemier went from 1-under-par to 1-over at the midpoint of his round Wednesday trying to qualify for the state amateur tournament.

“I knew where I was, just don’t do anything silly,” the Poplar Bluff golfer said of his score in relation to the field.

Thanks to a scoring app on his phone, Thielemier and the rest of the field fighting for 12 spots were given live scores updated after each hole.

“That made it a lot different than when I was playing in these things when I was younger,” Thielemier said. “I have no clue and you don’t know where you’re sitting so that made it really nice knowing.

Thielemier was one of only three players to finish par or better at Westwood Hills Country Club.

Brevin Giebler of Cape Girardeau earned medalist honors at 2-under 69.

“This is a qualifier, you’re not out to win,” Giebler said. “You’re not going to win anything but you could lose it.”

The top 12 advanced to the 133rd Missouri Amateur Championship, which will be held June 23-28 at Ozarks Naitonal Golf Course in Hollister.

The 18-hole event Wednesday was the second of five qualifying tournaments around the state with a last-chance event to be held in Rolla for anyone that missed the cut.

For everyone in the field, this was also one of the first competitive tournaments of the year. The Tom Hoover Ozark Invitational was postponed in April due to the COVID-19 pandemic but will be held in September.

“When the card goes in the back pocket and it actually counts, it’s a little different,” said Giebler who had five birdies and 10 pars.

After his tee shot on No. 6 went out of bounds into the driving range, Giebler’s provisional cut the corner and landed on the fringe of the green. He was able to two-putt for bogey and got back to even-par with a birdie on the par-5 ninth. Following a bogey on the par-3 12th, he got consecutive birdies starting on 14 before closing with three straight pars.

Kent Phillips, of Cape Girardeau, tied for second with three birdies on the back 9 including the par-5 final hole. Like Thielemier, Phillips also made the turn at 1-over but got birdies on 11 and 13 to get back to even.

Thielemier’s round started with a bogey and a tee shot in the water but he saved par and got back to even with a birdie on No. 4. Following a double-bogey on the par-5 ninth, he reached every green in regulation on the back 9 for pars and a birdie on the par-4 13th.

Pullum had a rollercoaster round with only one par through 12 but was even par with birdies on half of the holes. He had another birdie on 14 to get to 1-under before bogeys on the final two par-4s.

Godwin reached 2-under with a birdie on 13 and was 1-under when his shot on 17 was buried deep in the sand leading to a double-bogey.

Adam Friga of Oran, Ian Davis of Makanda and Olathe’s Justin Wingerter tied for eighth at 3-over.

Troy Bell of Jackson and David Babcock of Cape Girardeau tied for 11th to earn the final spot at 5-over. Bell birdied the par-5 18th then had to wait to see if his score was enough over the final five groups.

Thomas Heisner of St. Louis was the first alternate at 6-over with pars over his final four holes.

Godwin said the greens at Westwood Hills, which plays at 6,427 yards, have gotten faster this week with the dryer weather and for this tournament.

Said Giebler, “The greens were fantastic.”

Did not make the cut: