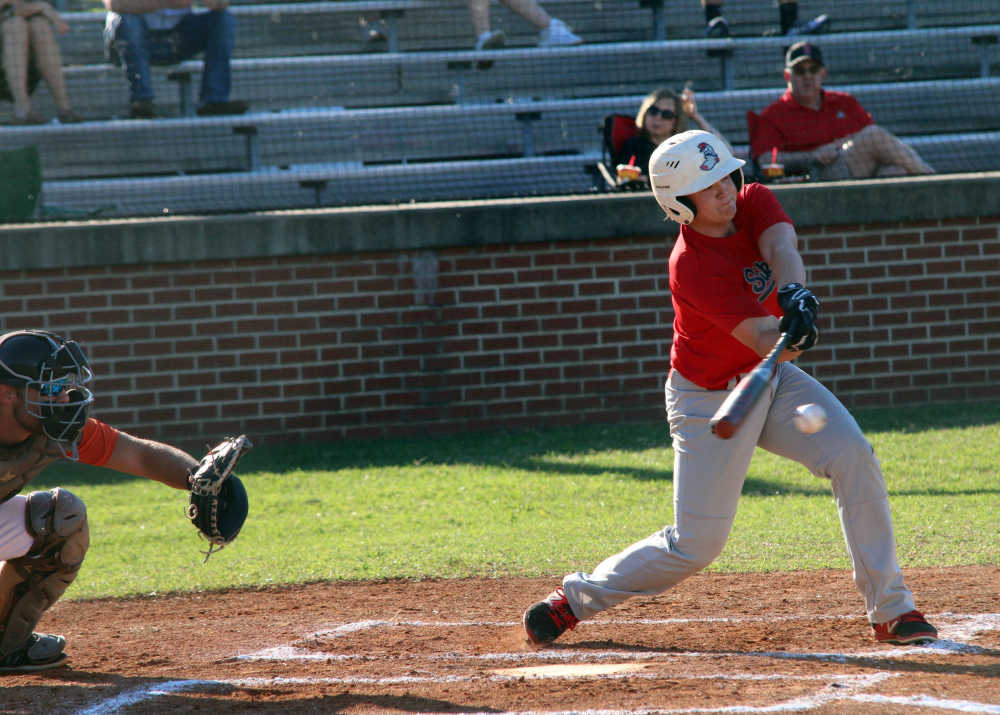 SIKESTON — Two innings were the difference for the Sikeston Silver Sox in Monday night’s opener against the Cape Girardeau Titans.

Both the second and seventh innings resulted in an outpour of runs for the guests, as they went on to defeat the Silver Sox 13-7, at VFW Stadium.

“It’s our first game, and the kids haven’t played since last season,” Silver Sox head coach Josh Hampton said. “Not a lot of live at-bats and reps; it’s really good to get them out here. We played well. We had minimal errors, we didn’t hit the ball as well as I’d like us to, but that’s something we can always capitalize on.”

After taking a 2-0 lead in the bottom of the first, Cape Girardeau responded by doubling Sikeston's score in the next half-inning.

Former Cape Central Tiger Zach Haggerty started the rally for the Titans by drawing a walk. Caedan Knepp then drew a walk of his own, while Noah McCoy was hit by a pitch to load the bases with nobody out.

Walker Daum then gave the Titans their first run after drawing the third walk of the frame to cut the Sikeston lead to 2-1.

After four-straight plate appearances without one ball put in-play, Bronson Lively broke the stretch after hitting a ball to the left side of the diamond.

Silver Sox shortstop Hayden Alcorn tried to start a double-play, but after applying the force at second, second baseman Barrett Davis’ throw to first was not in time, allowing the game-tying run to cross for the Titans.

It didn’t take long for Cape Girardeau to then take the lead after tying the contest, as they scored the go-ahead run, at the time, on an error by the pitcher after he tried to pickoff McCoy at third base. The Silver Sox’s hurler wildly threw the ball out of the third baseman's reach to make it a 3-2 game and a lead that the Titans would not let slip away.

Matt Huey then made it a 4-2 contest for the guests, after he singled home Lively before the inning ended on a Zach Moore groundout, however not without damage already being inflicted.

Later on in the game, the Titans broke out another big inning, scoring six in the seventh to take a 13-3 lead heading into the bottom half of the frame.

Before that, though, the Titans received a burst of power from their two-hole hitter in the fourth inning.

Right after the Silver Sox cut the lead to one, at 4-3, Hunter Hiett made sure not to let things get any closer, as he drilled a two-run home run over the left-field fence — putting the Titans ahead 6-3.

“We needed that,” Cape Girardeau head coach Keith Daum said. “First game out and, obviously, with the final score that kicked things into play.”

A seven-run seventh proved to be important in the end, as well, as Sikeston bounced back and cut the margin to six in the bottom half of the frame.

Tharen Russell started the inning off with a walk, while Kadin Wilburn got hit by a pitch after a Joe Miles strikeout.

The bruises continued as Mason Ahlvin got drilled, as well, to load the bases with one out.

Tyler Stokes then drove in the fourth run of the game for Sikeston, on a walk, while Trey Drake became the third batter of the inning to get hit by a pitch — driving in another run — to make it a 13-5 game.

Without one ball put in play, Mason Slipis would drive in another run for the Silver Sox, also on a walk, to make it 13-6, while Brice Pullen became the fourth hit batsman of the frame, to total the 13-7 final.

Overall, for Daum, having a cushion, especially in the late goings, turned out to be a blessing in disguise for his Titans squad.

“Very important,” said Daum of the run support. “You know, the first game of the year for them (the team) and just trying to get the arms out there, trying to get some game time situations. That’s why I gave guys a longer leash then we might normally do, but everything came through, and I’m happy for it.”

As for the Sikeston side, wasted opportunities would be one way to characterize the game.

The Silver Sox left 13 baserunners at their respective stations while the Titans stranded three.

“No one’s used to seeing pitches right now,” Hampton said. “They’re getting back into things, seeing different things. That's throwing some of these kids off. But, I feel that once we start getting more into it and once they see more live pitching, I think they’ll come around and start hitting the ball. With people on, and no outs, that’s kind of what hurt us, but putting the ball in play would have made a big difference.”