SuperFan: Mansell is a Cape "Okie," devoted to the Sooners 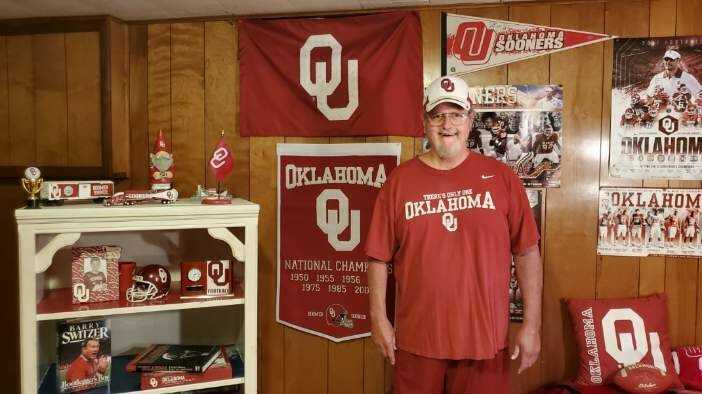 Today: Dave Mansell, 65, Lawton, Oklahoma native and Cape Girardeau resident since 1995, whose heart belongs to his beloved OU Sooners of the Big 12 Conference.

Dave Mansell has been in Cape Girardeau for 25 years, but his heart never left his native Oklahoma and the state’s flagship university’s football team.

“Nebraska came to Norman (Okla.) on Thanksgiving Day that year and the Huskers won 35-31,” Mansell added. “That (game) really got me started.”

Mansell’s ardor for the crimson and cream, Oklahoma’s colors, extends to his son, Billy, and his Cape-born wife, Natalie.

“I taught them well,” Mansell chortled. “(Billy) is maybe a bigger OU fan than me with his knowledge of team stats and recruiting.”

Last fall, Mansell said he checked off an item on his bucket list as the family traveled to Dallas to see OU take on Texas.

“The game is always sold out, but the family surprised me with tickets,” said Mansell, who added the OU-Texas rivalry might be the biggest in college football. 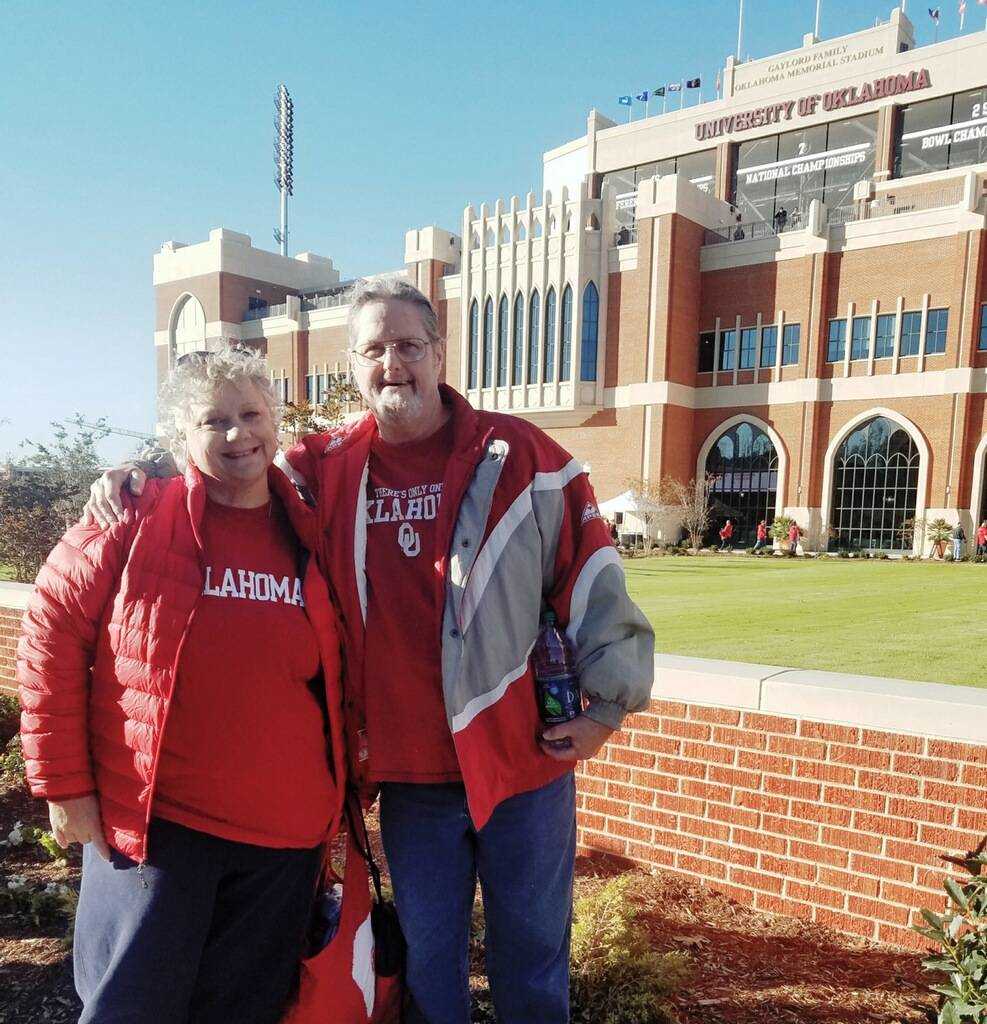 Dave Mansell (right) and his wife Natalie at Owen Field in Norman, Oklahoma in 2018. Submitted photo

Mansell said because of his four-year enlistment in the Navy, he never saw a minute of Oklahoma capturing two national titles in a row in 1974-75.

“On board ship, we couldn’t watch television,” recalled Mansell, “(so) I kept up with the team through newspaper articles my parents sent in the mail.”

“I love (Mayfield’s) style of play and his personality,” said Mansell. “(Baker’s) fun to watch and his antics sell tickets.”

When this reporter noted Mayfield’s struggles in his second season with the NFL’s Browns, Mansell said the fault lies elsewhere.

“(Mayfield’s) offensive line gives him no time to do anything,” Mansell opined. 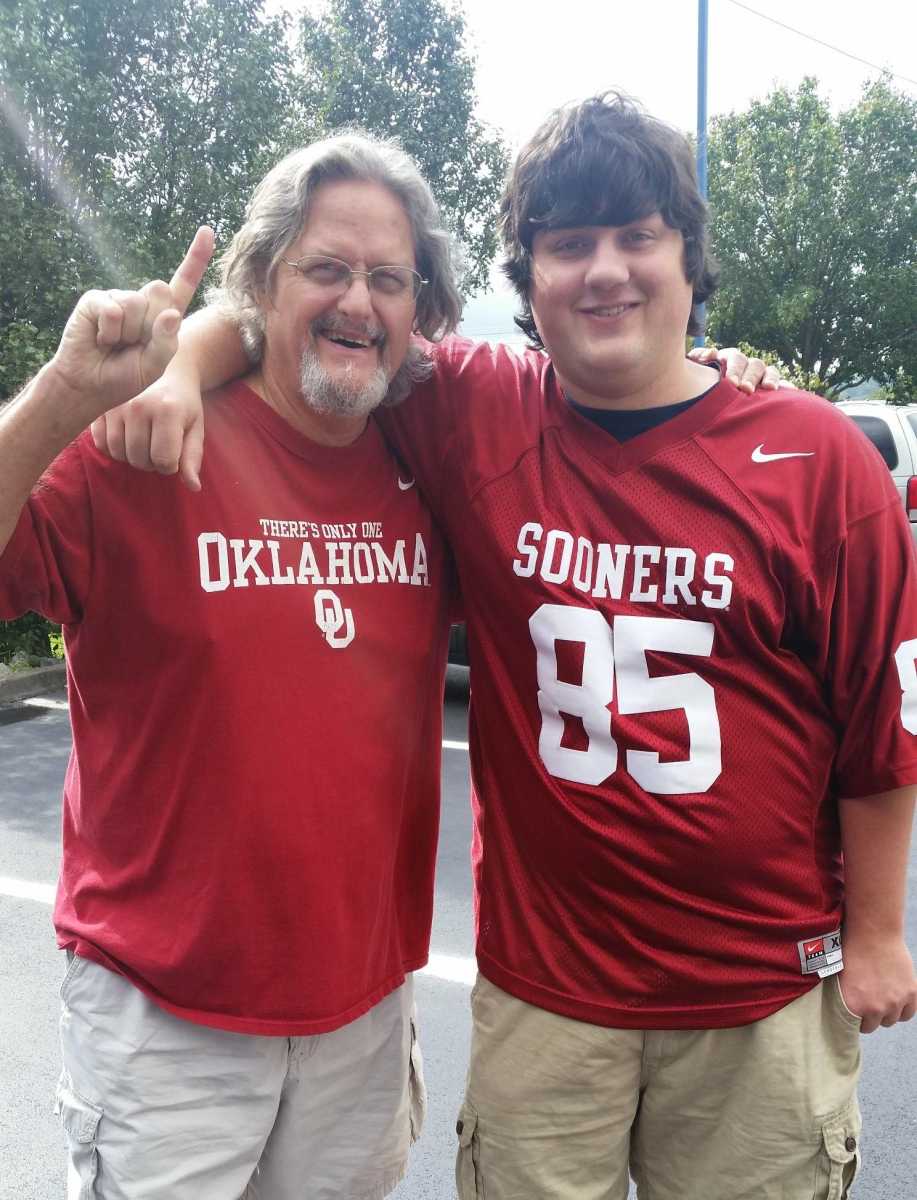 Dave Mansell (left) and son Billy attend an OU game at the University of Tennessee in 2015. Submitted photo

“He’s an accurate passer and runs well and if gets some blocking, he’ll be awesome,” he added.

Mansell recalled Mayfield’s heroics in a 2015 OU game against Tennessee at Knoxville’s Neyland Stadium, which the Lawton, Oklahoma native called the largest venue he’d ever attended.

“Boy, that was a loud place,” recalled Mansell, who in years past tried to get to one or two OU games per year.

“We were down 17 heading into the fourth quarter,” recalled Mansell, “and Mayfield brought us back to win in overtime, 31-24.”

Mansell has high hopes for the young man who presumably will be under center for Oklahoma this coming fall, sophomore Spencer Rattler.

“I’m excited about (Rattler),” said Mansell. “People are already talking Heisman for him.”

When it comes to a favorite coach, there is no contest.

“Some might argue but it’s Barry Switzer for me,” said Mansell, referring to the long-retired Sooners skipper who led OU to three national titles.

“(Switzer) was a players’ coach and he loved defense,” said Mansell, “and it’s the defense that wins games.”

Will there be a football season due to the lingering coronavirus?

“I hope so, man,” said Mansell, “and if there aren’t any spectators, that’d be weird, but I could deal with it.”

Mansell laments Mizzou leaving the Big 12 because the Sooners don’t come to the Show Me State anymore to play.

The one-time petty officer third class doesn’t mind the ease at which NCAA players can now transfer, nor is he bothered by the new-found freedom of college players to endorse commercial products.

“(Players) need the money and so long as it’s done right, I’m fine with it,” Mansell said.

Mansell became a barber in the Navy and spent 30 years after military service cutting hair, many of them for J.C. Penney.

In his vocation, therefore, he got used to talking up his customers.

“I liked to tell people, ‘I’m Sooner born and Sooner bred and when I die, I’m Sooner dead’.”