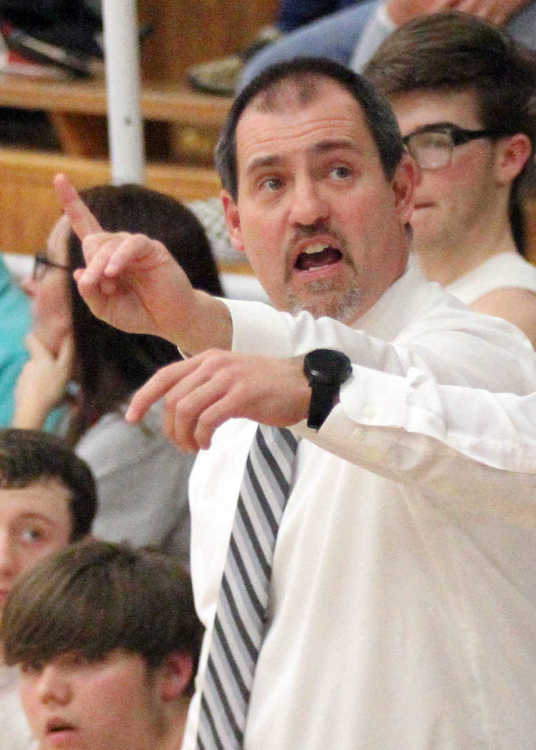 Today: Brandon Blankenship, 40, athletic director, Risco Schools and head boys basketball coach, Risco High. He is the winningest coach in school history (268-205/.567), and this fall will begin his seventh year as Risco's elementary principal. The Tigers hoops coach since the 2002-03 season, Blankenship’s teams have won five district championships in Class 1 and have been champs of the eight-team Tri-County Conference four times. He is also a four-time conference coach of the year. Four times in the past decade, his teams have won at least 20 games. Six Risco players have gone on to play either college basketball or baseball. Risco boasts one of the smaller high schools in Missouri, with only 86 students in grades 9-12 during the 2019-20 academic year.

You're not a Risco alum, are you?

Technically, no. I grew up in Parma, four miles away. I went to Risco for several years starting in sixth grade, but I graduated from New Madrid County Central.

I was a 5-foot-9 point guard and Risco won a district championship while I was there in 1994. I went on to play hoops and baseball at Hannibal-LaGrange College. Legendary NMCC coach Lennies McFerrin (a 2016 Missouri Sports HOF inductee) was instrumental in getting me ready for the next level.

You’ve had repeated success at a very small school.

What is it that makes a good team: is it good players, good coaching, a combination of both?

My college coach, Kent Thomas, used to say, “It’s not the Xs and Os, it’s the Johnnys and the Joes.” I do think coaches get too much blame for defeats and too much credit for wins. You must have players who can ball, yes, but it’s a good marriage, if you get my meaning. Coaches count. A coach should be able to get players to max out their abilities and get them to play together. People tell me Risco can utilize players other schools might never let see the floor. It’s a two-edged sword here because you don’t have a lot of boys come out for the team in a small environment like Risco, but those who do get a lot of reps.

Delta’s Chris Hahn believes in run-and-gun basketball, play as fast as you can, up and down the court all the time. You?

It depends on your personnel. In a perfect world, I’d prefer to play fastbreak basketball with pressure defense and in our 2011-12 year (24-4), we did run and gun. But when the best player I ever coached, Nathan Burnett, who led us to two 20-win campaigns, was here – we ran more half-court sets with him. I adapt to who I have.

He was a four-year 5-foot-10 starter with over 2,000 career points and is Risco’s all-time leading scorer. He graduated in 2019 and now plays for College of the Ozarks.

Is there a single game that crystallizes Burnett’s time at Risco?

In Nate’s senior year, 2018-19, we were playing Scott County Central, who year-in and year-out, have awesome squads. We hadn’t beaten SCC since 1976 and it was the ’19 district championship game, it looked like we wouldn’t beat them again. We were down 11 at halftime and Nate just takes over in the 4th quarter. He puts up 20 points in the final frame, 36 points on the night, and we win on Nate’s buzzer beating jump shot. Huge relief to get the W because SCC had ended our season seven times previously.

With your success at your age, do you have ambitions at coaching in a larger setting?

I won’t deny it is tempting at times and I’ve had other opportunities, like an overture to go to Dexter one year. But I enjoy the community and Risco feels like home. Until I became a principal, I coached K-12 physical education and I got to see kids literally grow up before my eyes, many of whom end up playing for me. Risco gives me a lot of leeway to make decisions, especially about athletics, and I’m happy here. Also, I’ve had the blessing of seeing former players become my assistants.

I suppose at the top would be Kennett’s Andrew Halford, who graduated from Risco in ’06 and went on to become SEMO Conference coach of the year. (Halford announced earlier this month he is moving to Florida.) Dillon Hill, ’09, is still one of my assistants. Luke Bixler, ’12, was with me two years at courtside and is headed to Bell City. Brittany Crane, Nate Burnett’s sister, just stepped down at Malden as volleyball coach for family reasons, and I coached Brittany’s girls basketball team in Risco back in the day.

In a small town, I’m sure you get a lot of coaching advice. I’m thinking of Gene Hackman coaching Hickory in the movie “Hoosiers.”

Parents expect their kids to play, yes. Your assessment of a player may well be different than that of the parent. I recall one year we wound up with three sophomores in the starting lineup (when we won our first district title in 2010) and that meant three seniors had to be contributors off the bench. I’m honest with players and parents and in the end, it’s about trusting me to make the right call for the team.

No girls basketball in Risco?

We don’t have a girls basketball program and haven’t since the 2007-08 year. Not enough interest.

You had a chance to coach girls basketball straight out of college.

Yes, I could have become head coach at my alma mater, NMCC, but I wanted to be on the boys side.

Say a word about your family.

My wife, Staci, and I live in Malden. We been married 18 years. Staci teaches high school science at Risco. Because I’m the elementary principal, we're in separate buildings. My 14-year old son, C.J., is a rising freshman at Risco and I’m looking forward to coaching him. We also have an eight-year old daughter, Mabry. Staci and I have a partnership and I couldn’t do my coaching without her, my parents and my grandma. By the way, quite often my Mom will have supper waiting for us after a game, even if we can’t get there to eat it until 10 o’clock at night.