SD GIRLS ATHLETE OF THE YEAR: Future Redhawk Kaylee Payne paved her path not just on the softball field 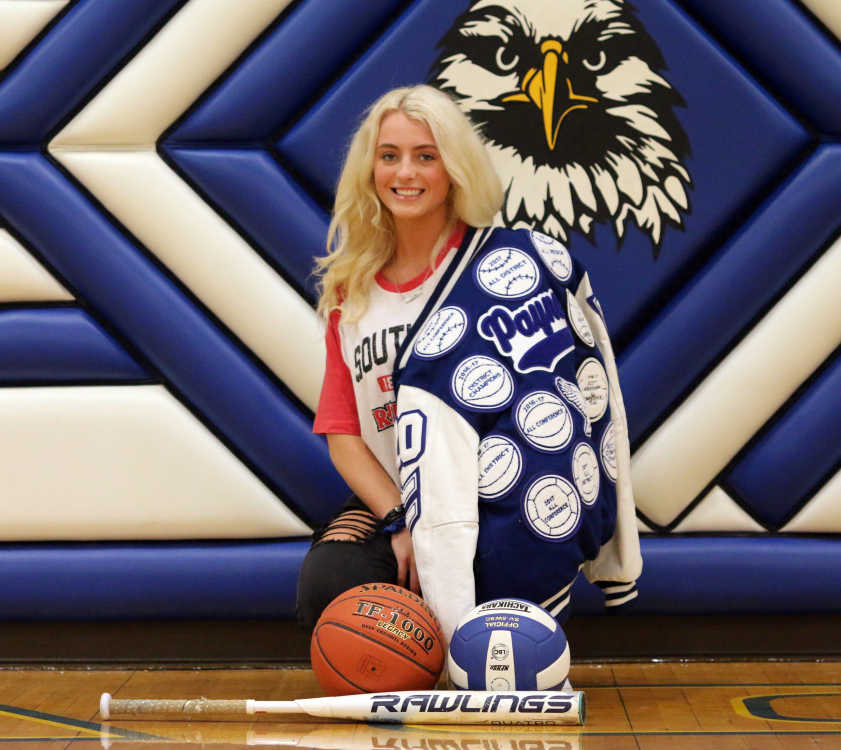 Oran's Kaylee Payne poses for a picture at Oran High School, on Tuesday, May 19, 2020. Payne is the 2020 Standard-Democrat Athlete of the Year.
Alex Wallner/Standard Democrat

ORAN, Mo. — Becoming successful in athletics takes hard work and dedication, along with time and commitment. For multiple sports, it takes even more.

Oran senior and three-sport athlete Kaylee Payne showed what all four characteristics lead to after a successful athletic year with the Lady Eagles, earning her the 2020 Standard-Democrat Girls Athlete of the Year.

No matter the sport she happened to be playing, Payne found the time to practice, get better, and still enjoy the journey all at the same time, even though softball was the sport she chose to continue at the collegiate level.

“My dedication to whichever sport I played came first, and after as much practice as possible, I would use my leisure time to work on softball,” Payne said. “It helped break the trend of long seasons by practicing softball during basketball and volleyball season, but yet helped me progress in softball.”

Even though the coronavirus pandemic ended all hopes of a long senior season on the diamond, Payne still made an impact in every sport she played.

On the basketball court, Payne earned one of the top individual honors for a player, as she got recognized on the Class 2 All-State team after leading her team to the Show-Me Showdown for the first time in three years.

The guard averaged 14.6 points, 5.4 rebounds, and 4.1 assists per game. She also shot 43 percent from the floor and was the player that made everything run smoothly.

“She was our lone returning player that had significant minutes last year and was looked up to do a lot,” Oran head girls’ basketball coach Larry Boshell said. “She settled in, and she made everyone else better. She could have scored a lot more at different times in the games, but she led us in assists and taking that leadership role and doing what was needed each game.

“I thought she had an outstanding season.”

They went on to respond well, as the Lady Eagles finished with a 25-6 record and a third-place finish at the Show-Me Showdown, and through it all, Payne knew what she had to do after the first go-around in 2017 — her freshman season.

“After the first year and being young, I knew that as a team, we had to come closer and get the ball moved around more,” Payne said. “I learned to adapt more to my teammates and my roles, depending on the situations to get the best team results.”

Expectations were high for the Southeast Missouri State softball signee.

One assumption was that she was going to have to score a lot for the team to be competitive.

However, instead of looking to be the team’s primary scorer, she became a multi-dimensional threat and made her, and her teammates, better all-around as a result.

“Coming in, I think everybody expected her to step up and try to score 25 to 30 a game for us,” Boshell said. “She was trying to make up for what we lost. We weren’t going to replace Leah Cauble’s scoring; it wasn’t going to happen with one person. So, what we did, and what she did, was she got her points, but she also spread the ball around and had faith in her teammates.

“Other girls scored for us, and we had a much more balanced attack, and I think that showed her leadership capabilities. I do believe she thought she might have to score more, but she settled in. She was just an all-around player and a hard worker.”

During the volleyball season, Payne showed not only her abilities on the court but within the team.

Serving as her head coach for three of her four years, Amy Wibbenmeyer said that since she arrived at Oran and became the volleyball coach, that Payne grew leaps and bounds as a coach on the hardwood.

“She just developed more and more to a bigger team player and more of a leader because you look to your seniors as the leader,” Wibbenmeyer said. “I would say she was the leader on the court at all times because she’s a huge athlete. She understands the game. She knows how to be a teammate. She knows how to be an athlete, and that’s what it takes to be the biggest team player.”

Within the lines, Payne also proved to be the catalyst for the Lady Eagles.

Payne led the team with 70 kills and was the co-leader in digs — with 14 — while adding 15 blocks and 15 assisted blocks.

“For the past two years, she got MVP of our team, and she got two Coaches Choice Awards,” Wibbenmeyer said. “We picked her because she was anything and everything that a coach would ever want. She was a leader. She was a teammate. She was picking people up when they were down. She was the glue to hold all of the team together.

“She was our offense and our defense. She was our biggest hitter; she always had our most digs — other than our libero.”

Payne’s leadership paid dividends for the team and was the area that Wibbenmeyer expected her to fill during her senior year.

Like basketball season, Payne’s influence on the volleyball team made them work better as a unit, which her head coach noted when she got injured toward the end of the season.

“You can only look up to a coach so much, but whenever you have that player that whenever your coach says, ‘Hey, we need to run. We need to get in shape,’ and actually to have one of the players that are the leader be like, ‘Yeah, guys, we do need to do that,’ that’s our foundation. That’s how we can build a better program from there,” Wibbenmeyer said. “She also met those when we were in the SEMO Conference Tournament. She got hurt, and we had districts right after that, and she was sad she couldn’t play, but she would have pep talks with the girls before, and when I would call timeouts, she would be the backbone support even when she wasn’t on the court.”

Now, Payne is taking on a more rigorous task, as she battles Division-I level pitching for the Redhawks next spring.

Payne said that when she chose softball as her primary sport, it was mainly because of the responsibilities she had to put on herself.

Responsibilities, not only as an athlete but also as a student, are what she said she is going to take away the most from her four years of high school.

“School always comes first, and if you work hard, it will pay off,” Payne said. “I have learned to overcome different obstacles/situations and adapt to make the best of each scenario.”

Now, she — along with various other athletes — are challenged with a new scenario.

One that ended her senior season altogether, and coming off the heels of a strong junior campaign, a challenge she was looking forward to taking head-on.

Then, when she reached base safely, she showed her speed and base-running ability, as she stole 38 bases and only got caught once.

In the fall of 2019, all of her years of hard work paid off, as she officially signed to Southeast Missouri State, a decision that she believes will turn out in her favor.

“I love how much SEMO’s emphasis was on building up the program and how determined Coach Redburn is to help the team get better,” Payne said. “He has shown me results of what hard work, dedication, and teamwork will do for a program.”