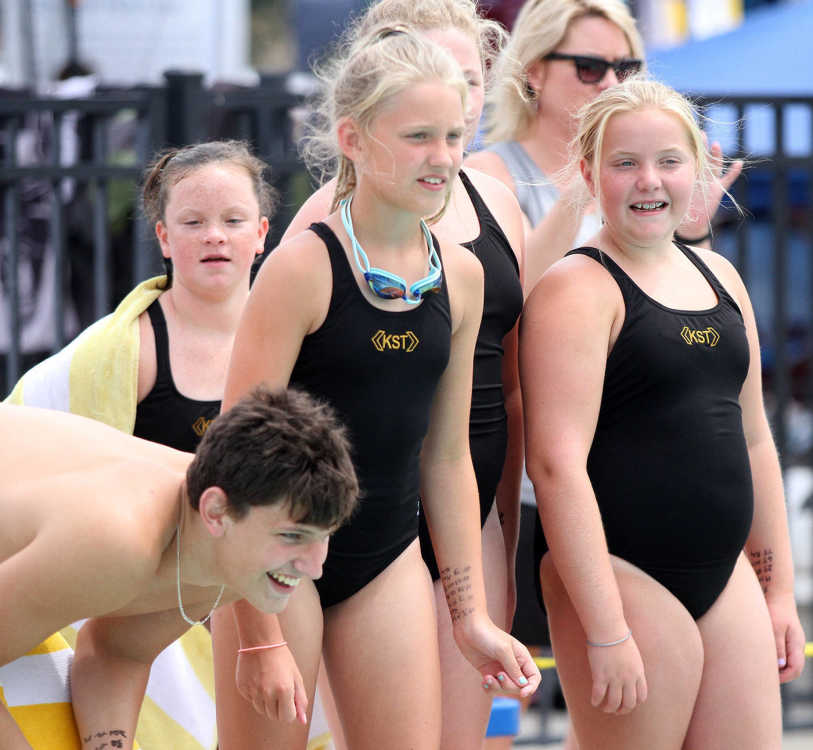 Photo by Dustin Ward, staff
Members of the Kennett Swim Team eye a race at Sheryl Crow Aquatic Center in Kennett during the 2019 season.
Order this photo

Longtime Kennett swimming coach Malinda Harris has never struggled getting swimmers to sign up to participate in her summer league swim program.

“We are fortunate enough to have so many swimmers in our own program we can have a very competitive meet without going beyond our own team boundaries,” Harris said. “We typically have several swimmers in each age group competing against each other within our own program.”

Turnout is high once again for the Kennett swim program less than a week before the start of summer practices.

“We are looking at an all-time high in our program this summer,” Harris said. “Right now we have 170 swimmers signed up and I expect a few more to sign up this week.”

The high numbers within the program will make it possible for Kennett to compete in meets even if the other teams in the Southeast Missouri Swim Conference cancel their own seasons due to the COVID-19 pandemic.

“The conference is allowing each program to decide on their own if they want to host meets this season,” Harris said. “If a program wants to host a meet and invite other programs they can or they can elect to have intersquad meets instead.”

Swim meets are scheduled to take place at the Sheryl Crow Aquatic Center in Kennett on June 20, June 26, July 10, and July 18.

“We have chosen at this time to only have intersquad meets,” Harris said. “We have scheduled four intersquad meets this year - two on Fridays and two on Saturdays. We may choose to open that up to other teams in the conference but as of now it’s just going to be Kennett swimmers competing against each other.”

“They didn’t feel like they wanted to invite that many teams to one place for a conference championship,” Harris said. “The championships were scheduled for July 18 and they weren’t sure if the social distancing restrictions would be lifted by then.”

Kennett plans on practicing daily from 7 a.m. until noon.

“We have modified our practice schedule a little bit,” Harris said. “We are separating some age groups that have typically practiced together to make things safer.”

Additional steps are also being taken to ensure safety at intersquad meets. Only 75 people will be allowed on the pool deck at one time and social distancing guidelines will be followed if they are still in place when meets begin.

“The swim team is very thankful to both the city council and park board for allowing us to continue our program this summer,” Harris said. “We would also like to thank Debby Stokley for the hard work she has put in to make sure the pool is open, safe, and ready for the summer. Things may look a little bit different at our home meets this summer. But we are excited we are going to be able to have a season.”

“Noll and Emma are both new to the coaching staff this year,” Harris said. “Noll is a longtime swimmer who has served as a coach for our program in the past. We are happy to have him back. This will be Emma’s first opportunity to coach. She has also swam in our program for many years.”