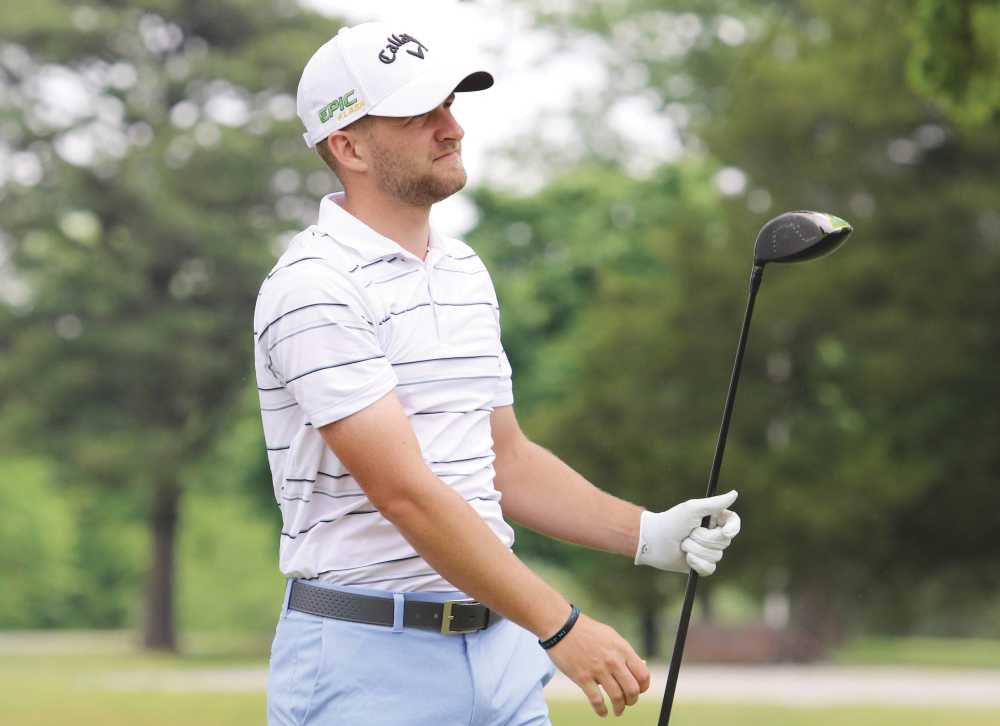 Carr Vernon of Poplar Bluff watches his tee shot on the first hole at Westwood Hills Country Club on Friday, May 22, 2020, a day after he recorded a hole-in-one on the par-4 hole at the Poplar Bluff golf course.
DAR/Brian Rosener
Order this photo

POPLAR BLUFF — Nobody was around when Carr Vernon had his first hole-in-one as a young teenager playing a round at Westwood Hills Country Club.

His second came playing college golf in California and No. 3 was during a tournament on the Mackenzie Tour in Canada last summer. 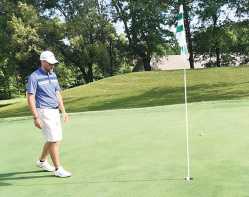 Carr Vernon approches his one-in-one on the first hole at Westwood Hills Country Club on Thursday, May 21, 2020, in Poplar Bluff, Mo.
Photo provided by Drew Brown

“Good first swing of the day,” Vernon said of his ace, which on a par-4 hole is called a double eagle or an Albatross.

Vernon said he’s had a pair of double eagles on par-5 holes, including the ninth at Westwood Hills. Even for a professional golfer, a hole-in-one on a par-4 is pretty rare — it’s only happened once on the PGA Tour.

Vernon hit a driver from the first tee that landed on the front of the green and rolled about 50 feet to the hole.

At least that’s the theory based on the ball mark left on the green that is hidden by trees when standing on the tee box.

As he got closer to the green looking for his ball, Vernon was not sure what he was seeing. It looked as if the foam placed in the hole as a precaution due to the COVID-19 pandemic was sticking out.

“I know that can’t be right,” Vernon said.

It wasn’t until he was walking on the green, closer to the hole that he realized it was his ball wedged between the flag stick and the side of the hole.

“I get up there, I’m just excited so I don’t even know what to do at this point.”

One of the golfers in the group jokingly asked if it was a tap-in birdie. Brown snapped a few photos with his phone as Vernon picked up his ball.

“He didn’t react really,” said Brown who was surprised to learn that Vernon said his heart was racing and needed a few extra minutes before continuing his round.

Vernon had a birdie on the par-5 second and a two-putt par on the par-3 third hole to start his day 5-under-par after four holes.

He holds the best non-competitive score at Westwood Hills at 13-under 58 during a July 2015 round.

The opening hole at Westwood Hills has a narrow window for golfers to aim their first drive of the day.

On the left, out of bounds, is County Road 471 while on the right is a lake and a group of tall pine trees that the fairway bends around. If a high shot clears those trees, another set of smaller trees protects the green.

Vernon was playing with Brown, Kevin Barbour Jr., Randy Rahlmann and Levi McNeal. It was a men’s league day Thursday at the club so the group was playing off the blue tees which measures at 331 yards.

Vernon estimates it was closer to 300 yards from the tee to the middle of the green. With the wind at his back, Vernon said he knew he could get his tee shot to the green.

“When it’s like that I’m just going to aim it at the green,” Vernon said of the conditions.

“I mean, obviously, it’s just completely lucky,” he added. “I’m not even sure where the pin is when I’m teeing off.”

Brown described the tee shot as a little draw “way up over the trees.”

“I was pretty stiff,” Vernon said. “After I swung Drew was like ‘man did you hurt yourself?’ I’m like ‘yeah, a little bit.’”

Vernon said if there was a par-4 hole that could be aced at Westwood Hills he would have thought the 311-yard sixth hole might be the best candidate.

With foam in the cup to prevent balls from dropping in, Brown said that makes what happened even tougher.

“It’s really even more lucky that the ball went in because it must have been rolling with really good speed and hit the flag probably,” Vernon said. “That’s what I’m assuming because otherwise it’d be pretty crazy with the foam in there.”

After their four-hole warmup, the group went to start their men’s league round on the back 9. To make his round and hole-in-one official, Vernon needed to play holes 5-9 and Brown joined him.

“We had 30 minutes to finish those last five holes,” Brown said. “He was really grinding on the last two holes.”

Vernon finished his round with a birdie on the par-5 ninth for an 8-under 63.

“Not a bad round,” Vernon said. “Nice for it to have been a little lower.

“It was hard to finish.”

Brown said his only hole-in-one came playing for the Poplar Bluff High School team. The Mules won the tournament by 30 and his score didn’t count but his teammates were “jealous.”

“It’s always cool to play with Carr,” Brown added. “He’s really a class act and a lot of fun to play golf with.”