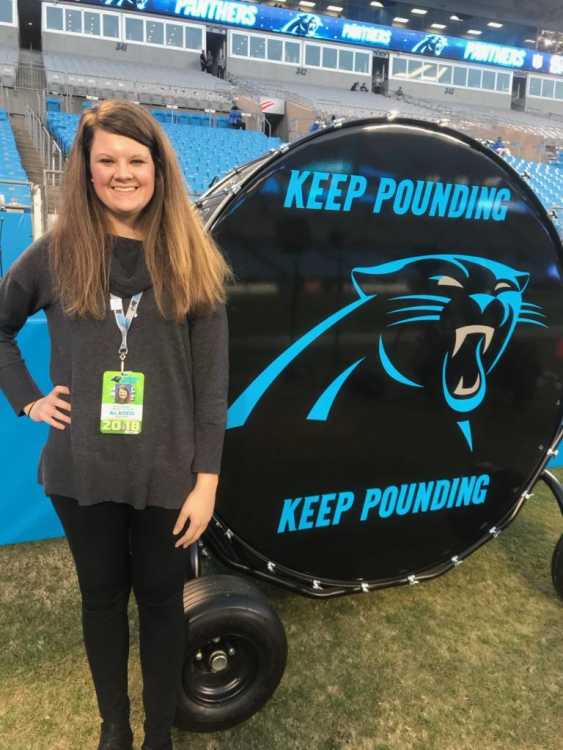 Melissa Stephens, Jackson High School and Southeast graduate, is pictured during her intern year with the Carolina Panthers, 2018-19.
Submitted

Today: Melissa Stephens, 24, Jackson High graduate (2014), a sport management major at Southeast Missouri State (graduated 2017), who desires a career in the National Football League. So far, she has completed paid internships for with three NFL teams: Baltimore Ravens, Carolina Panthers and Cleveland Browns. Melissa was recognized as one of the Top 100 honor scholars by the American Kinesiology Association.

When did you know you wanted a vocation in sports?

During my senior year at JHS, I started shadowing the SEMO Athletics Department for a full year. When I came to Southeast, I started working especially on game-day promotions. In 2015, I got an internship as an undergrad in minor league baseball with the Frisco Rough Riders, the Texas Rangers’ AA team.

How did that go?

Frisco is a well-respected organization. The team makes money and draws impressive crowds. They had me cold-calling customers. I decided I didn’t like people hanging up the phone on me.

Did you have a focus on baseball originally?

Yes, I had a phone interview with the Cincinnati Reds and a Skype session with San Francisco. My understanding is I was runner-up for the Giants position. When nothing came through, I started looking at the minor leagues.

And you had an offer coming out of college.

I had multiple feelers out. Two months before SEMO commencement in 2017, I had an offer to go to the Erie Sea Wolves, an AA club operated by the Detroit Tigers. Before I started, the Ravens called, so I went to Baltimore instead. It kind of clicked for me and I knew I wanted to be part of the NFL. A week after graduating at the Show Me Center, I had a full-year paid internship with the Ravens until 2018.

And you’ve worked with other teams since?

Yes. From the Ravens, I joined the Carolina Panthers and stayed until May 2019. That same month, I went to work for the Cleveland Browns until sports stopped this spring due to the pandemic. I’ve been home in Jackson since February awaiting the next opportunity.

Have you settled on football as a career?

I’d prefer to work in the NFL, if I can.

The kind of work I’d like to do, and have done so far, is community marketing. The NFL plays 16 regular season games. Basketball plays 82, baseball 162. Because football has a limited number of games, there is more of a chance to interact with people, sometimes two or three times per week.

Say a little more about why the NFL is different.

The league has a social justice initiative, “Inspire Change.” The focus is on three areas: underserved youth, cancer awareness and military appreciation. You may have seen in October, the league does “Crucial Catch” for cancer. Players visit cancer patients and I’ve gotten involved with that. In November, the league does “Salute to Service,” with military nonprofits benefiting and fallen veterans honored. In terms of youth, since I was with the Browns most recently, the team worked to renovate a recreation center in a rough neighborhood. Players speak to Boys and Girls Clubs, too.

Let me ask about one player from each team you’ve worked for since getting your SEMO diploma.

OK, but let me say what you see on TV is sometimes very different from the person himself. Some players are really shy and it’s like pulling teeth to get them to interact. Others have roaring personalities.

Yes, Joe was still there during my internship. One of the nicest people, reserved and quiet. People looked up to him. If I had a special guest, he’d make time to stop and talk and get to know that person. I remember that especially with Make-a-Wish.

Cam has a big personality. Youth programs are important to him. The way Cam interacted with families was second to none. He knew he was a role model and took it seriously.

With the Browns, another QB, Heisman Trophy winner Baker Mayfield.

I didn’t work with him quite as much, but I’ll say this: down-to-earth, personable, good with fans, accepted he was a role model. He and his wife, Emily, do a lot to give back but it tends to be under the radar.

Your favorite NFL player, regardless of position, so far?

One of my favorite Ravens was Tony Jefferson (released this past winter). Funny, big personality. He was supposed to go in the first round (of the NFL draft), but no one took him. He became a star safety and played with a chip on his shoulder. 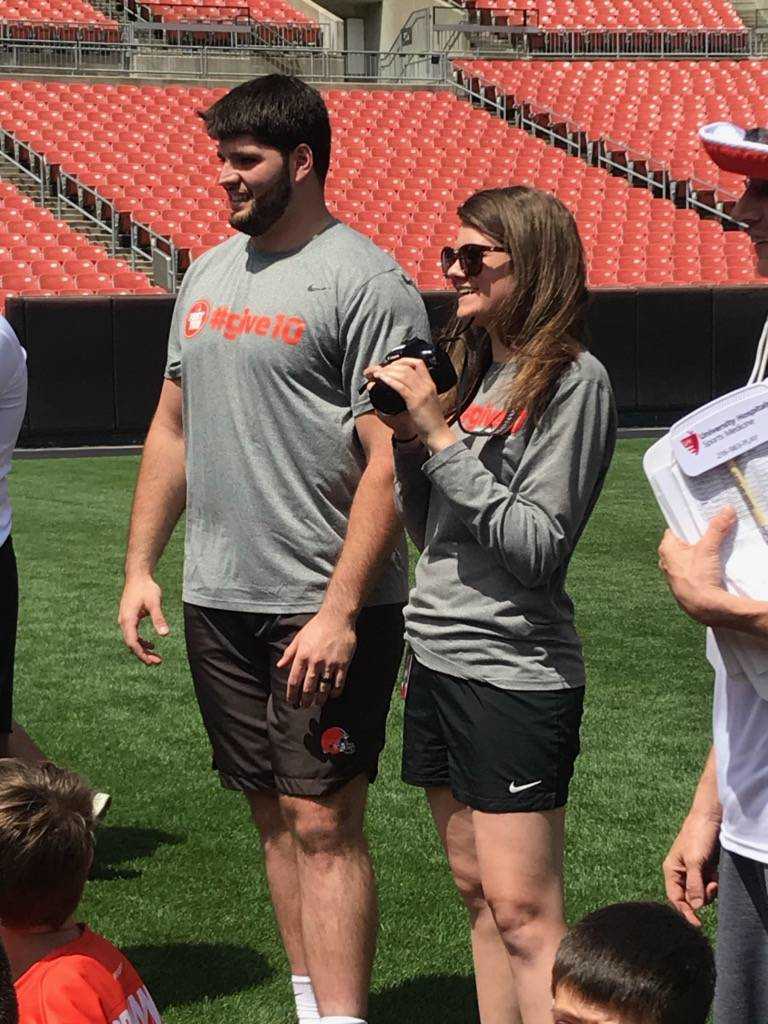 Freddie Kitchens was really on the hot seat in Cleveland and lasted only a year as head coach.

The year I was there, yes. I took it hard when Freddie was fired. A great guy. He’d joke around with the people in our department. In the NFL, you always know you can lose people, that firings happen, but they’re your co-workers. I think for a coach to survive in this league, you have to be good at pushing away all the distractions and stay in the moment. It’s hard.

Three teams, three paid internships in three years. What have you learned?

Working in the NFL is better than I ever imagined. I didn’t realize how much joy and passion athletes have for giving back to their communities. It’s really a dream come true.

You’re a woman in a male-dominated line of work. Have you experienced sexism, mistreatment, because of your gender?

No, I haven’t. We work very long hours, and no one wants to work in a toxic environment. I see the people I work with as big brothers, as family. There are more women working in sports now because others have cleared the way. What you’re talking about is not as acceptable as perhaps it once was.

Another internship in your future?

I’ve built connections in the league and have people looking out for me. I’m in a Zoom bible study with other NFL community relations people from various teams. You need others to keep you accountable to your faith. In the next month, I hope teams will be hiring again. Teams are on stand-by right now, not knowing exactly what’s going to happen. I check two or three websites every day that post NFL openings, but nobody is hiring just yet. But I’m looking for a full-time job.

How long do you stick it out?

I know someone who had six internships before getting on full-time. I’m tired of living on an intern’s salary. I’ve had opportunities to go with a non-profit because community marketing is about networking. I’ve had a chance to meet all kinds of people. But I worked to get into the NFL and want to be there. If there was a role in another sports league, though, I’d listen.

Most of us watch the NFL on TV and a few get to games occasionally. What do you understand now about the league seeing it from the inside?

I didn’t understand the highs and lows of a season. Losses are hard to swallow. Players are real human beings with families, hobbies and interests. The competitiveness of the NFL is incredible.