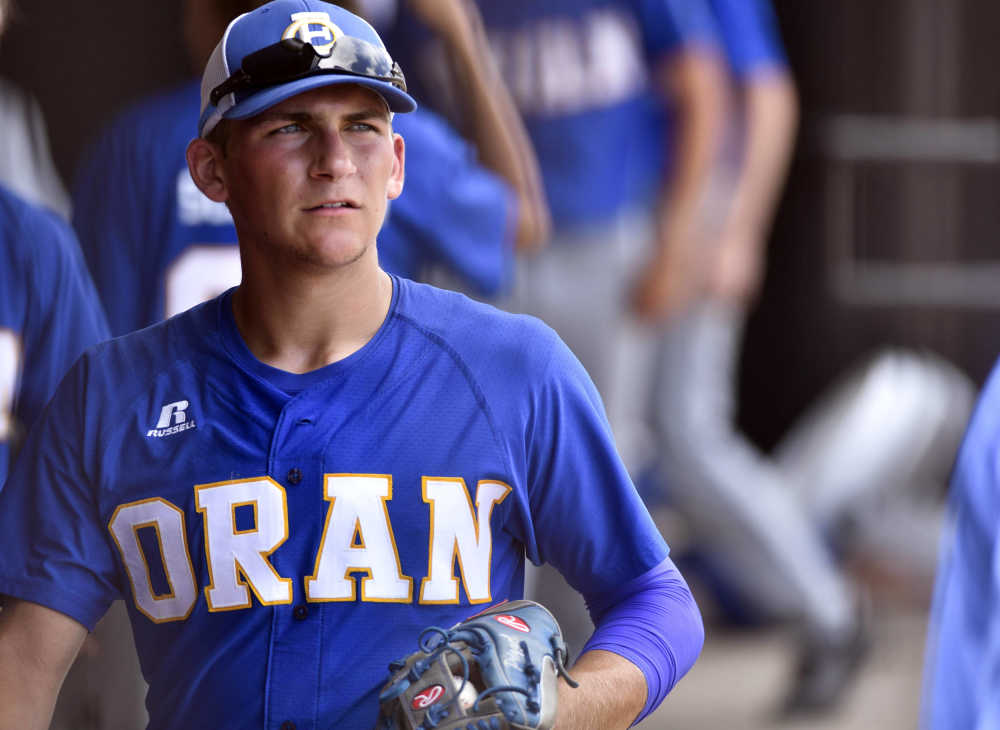 Oran sophomore Todd Priggel looks at the scoreboard on his way out of the dugout during the fifth inning of the Class 1 baseball state championship game against St. Elizabeth on Thursday, May 31, 2018 at CarShield Field in O'Fallon, Missouri.
Ben Matthews

CHAFFEE, Mo. — Canceling the 2020 baseball season left every team, most notably senior athletes, with no chance to compete for their schools one last time.

Once the Missouri State High School Activities Association (MSHSAA) made its decision, coaches from Charleston, Chaffee, Kelly, Scott City, Oran, Delta, Oak Ridge, and East Prairie decided to take action. They wanted to give their seniors one last at-bat, one last pitch, and one last time to round the bases in their uniforms alongside their teammates.

On May 31, at Harmon Field in Chaffee, a "Senior Showcase" will feature athletes from those eight teams.

“It was a pretty resounding ‘Yes’ amongst all the coaches,” Chaffee assistant baseball coach Aaron Horrell said of the event. “With the uncertainty of when we could get on the field, things kind of hit a wall. So, with things starting to, somewhat, open back up, we picked up our conversations. I had to go to a city park board meeting Sunday and ask permission if we could use the field for one day to give the seniors one last chance at playing ball.

“With the coaches reaching out to their kids, we would prefer to wait. But, when you get into June, you’ve got proms and graduations, and some of these kids are on the Charleston Fighting Squirrels, and some are on the Southeast Tropics, so it was going to be hard to coordinate schedules the longer we waited.”

There are three games scheduled for the day, with 11 to 12 players making up each team.

“We will do three substitutions with defense,” Horrell said. “Every kid will bat. Three teams and five-inning games make it so that you’re not stretching a pitcher out to 75-80 pitches who haven’t picked up a ball in two months because we want to be safe with a chance of arm injuries and things like that. We’re going to have arranged seating for each town, that way we can keep social distancing as best as possible, with our foul lines being open and our bleachers up around home plate.”

Giving the seniors one last opportunity is what Kelly assistant coach Jerry Wolsey said would mean to his duo.

“It is an opportunity for them to go out and compete one last time wearing Kelly across their chest,” Wolsey said. “I know it means a lot to their families as well. They both poured their heart and soul into this program, and this team had such high expectations this year, but we will never know what could have been. I expect both of them will play this game extremely hard, and I will have to rip that Maroon and Gold jersey off of them at the end of the game, that’s how much both of them love representing their school.”

“Closure” is the word that Charleston coach Michael Minner used in describing the game.

“You’ve had kids that have played ball their whole lives, and unfortunately, they lose their senior year,” Minner said. “So, you’re trying to allow kids to be on their field with their buddies that they’ve played with their entire lives one last time. I think anytime you’re trying to do that, you never know how things are going to go, but I think that people have worked hard and we’re hoping that it’s a really good day, solid day, for kids to be out there and their families to get to watch them one last time.”