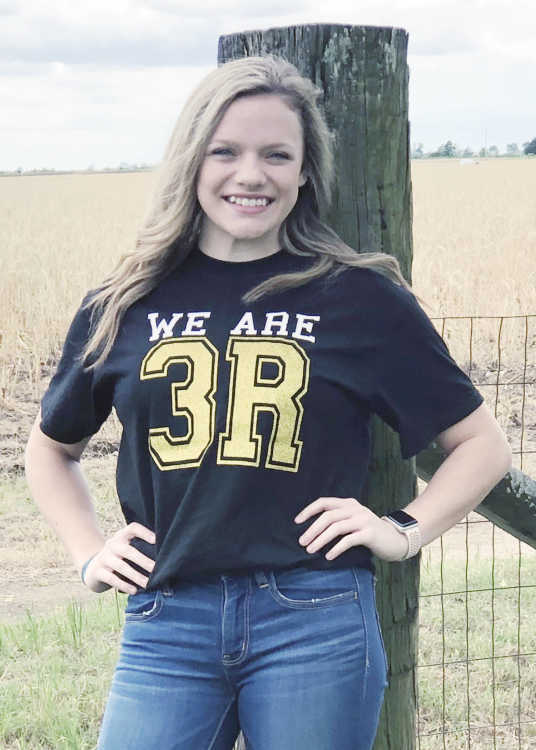 “Last year I went to a basketball game because my brother attends Three Rivers,” she said. “I observed how they were able to show off their cheers and their stunts. Then I asked my brother if he would show me around the school and I absolutely fell in love with the campus.”

Myers became even more interested in attending Three Rivers when she learned more about the nursing program it offers and eventually made the decision to attend the two-year school when she was offered a spot on the cheerleading squad.

“I went to trade school at New Madrid to get my CNA License and my teacher, Mrs. Gloria Houston, along with many others told me that Three Rivers had a great nursing program,” she said. “I started thinking about attending the school after I heard that. Then I got offered the Three Rivers Cheer Scholarship and I knew for sure that I wanted to go there.”

Risco cheerleading coach Beth Bixler has watched Myers develop as a cheerleader since she was in elementary.

“She started cheering for me when she was in elementary,” she said. “She was a captain on the cheerleading squad in the seventh and eighth grade and throughout high school. She handles the leadership very well. She has compassion and heart for the sport and has well-rounded skills.”

“She had to develop part of our homecoming dance routine as a freshman,” she said. “She did very well with that task for a freshman. After that she choreographed the majority of the homecoming routine.”

“It was the best homecoming routine I can remember,” she said. “Me and my best friend were so excited at the end of the routine that we had tears in our eyes.”

Myers has been involved in a slew of other activities in high school. She was a member of Skills USA, FCCLA, vice president of FBLA, president of Senior BETA, president of Student Council, and captain of the volleyball team at Risco.

“She is always upbeat,” Bixler said.

Myers began to develop a passion to be a cheerleader when she started attending high school basketball games at a young age.

“I’ve always went to the basketball games since elementary,” she said. “I’ve looked up to all the cheerleaders. I love being able to show off my abilities. I also love to dance and have always enjoyed putting together the homecoming routines. Being able to cheer has brought so much joy into my life.”

Bixler, who has served as the cheerleading coach at Risco more than a decade, said Myers is the first cheerleader she has coached that has accepted a cheerleading scholarship.

Myers hopes to become a registered nurse after college.

“I was born at 28 weeks and really struggled,” Myers said. “The medical staff at the hospital saved my life so I’d like to give back and help people as much as I can.”