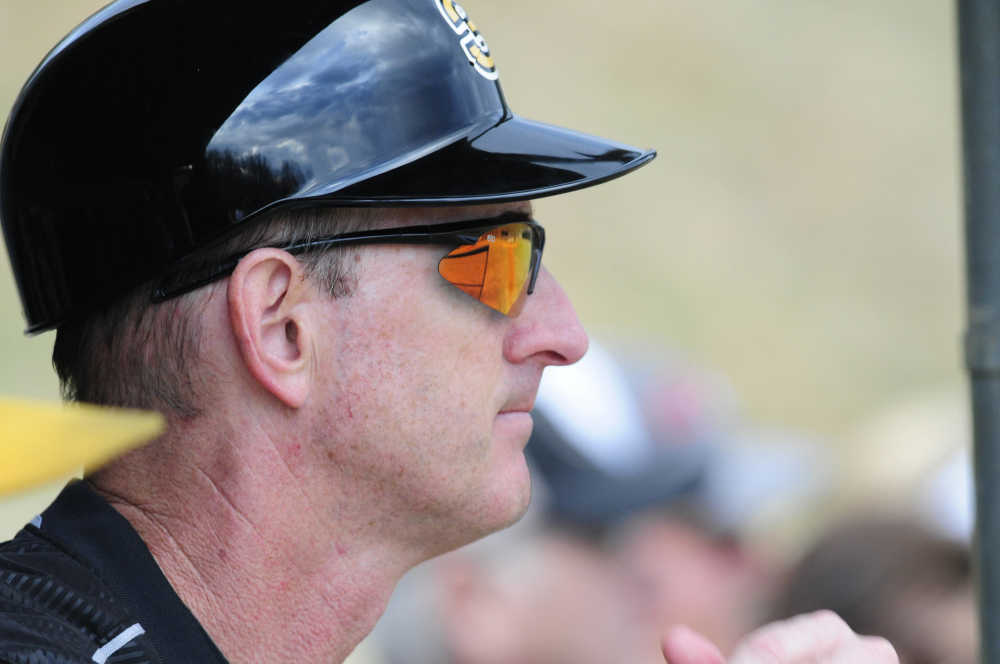 When Stacey Burkey toured the Three Rivers campus in the early 1980s, construction on the Bess Activity Center was being finished. Burkey walked into the gym, and basketball coach Gene Bess came out of his office and saw a lanky, 6-foot 4-inch teenager and wanted to know if he played basketball.

Then baseball coach Roger Pattillo told Bess the kid was a pitcher.

“He might end up playing a little basketball,” Burkey remembers Bess saying.

Nearly 40 years later, Burkey’s time at the college has come to an end.

After 33 years with the baseball program, six as an assistant, and 27 as head coach, Burkey is retiring.

“I’ve been fortunate enough to win 604 games, but more important than that, I’ve been able to develop relationships with a little more than 500 players that I’ve coached. Billy Graham once said that a coach will impact more people in one year than the average person will in an entire lifetime, and that’s something that I’ve never taken lightly,” Burkey said. “This has been a major family decision for me. My wife Sharon and our two boys, Josh and Noah, have sacrificed so much, they’ve been so supportive of me.”

Added Three Rivers President Dr. Wesley Payne, “After 27 years and 604 wins, I am sorry to see Stacey go. He runs a quality program focused not just on athleticism, but on character development and making his players better people.”

“Coach Burkey has been awesome to learn under,” said Tyler Smith, who played at Three Rivers and has been an assistant the past five seasons. “I’ve always said Three Rivers was a home to me. He gave me an opportunity. Coming out of high school I had two college offers and coming out of here I had 40.”

With Burkey’s oldest son Joshua, 25, expected to graduate from Central Methodist this summer with a bachelor’s degree in education and his youngest son Noah, 17, starting his freshman season on the baseball team at Missouri State University, Burkey highlighted the extra time with family as a big part of his decision.

“I’ve missed most of Noah’s high school games with our seasons being at the same time in the spring,” Burkey said. “As I got to looking at it more and more, I just felt like if I didn’t do it at this point, I’d regret it.”

If it had not been for the COVID-19 pandemic, Burkey isn’t sure he would have reached this decision.

For years, he’s been caught up in the day-to-day grind. Up until the last year and a half, he hadn’t thought about retiring at all. Then he couldn’t help but think about it as people asked him if he was going to hang it up to follow Noah’s college career.

“There’s just a full plate; it seems like every day. It can be consuming,” Burkey said. “This would have been the weekend of the regional tournament. There would have been finals this week, graduation, exit meetings for when our season ends, all kinds of stuff.”

More than 90% of Three Rivers sophomores who have played for Burkey since 1988 have gone on to four-year programs, 39 have signed professional contracts, and four — Matt Palmer, Alan Mahaffey, Bart Evans, Jimmy Hurst — have reached the Major Leagues. Former Raider Marcus Pattillo also made his debut as an MLB umpire in April 2014.

At Kennett, the superintendent and all three baseball coaches are former Raiders. Jake Nickelson is teaching and coaching at Winona. Both he and Senath-Hornersville coach Chris McLain said Burkey’s calm, direct demeanor has had a big impact on how they lead their teams.

“That was my biggest thing, how to connect with a kid without yelling at them,” Nickelson said. “Three Rivers really did change my life and he was a big part of it.”

“Putting so much time and work together, they’ve become like family, and I’d like to thank those guys for all their hard work and dedication,” Burkey said.

One of Burkey’s favorite memories was when Three Rivers renamed the baseball field on May 2, 2010, to Roger Pattillo Field.

Pattillo died of ALS in 1996. His final year coaching the Raiders was Burkey’s sophomore season in 1984.

On that day in May, the Raiders had a ceremony at home plate before a doubleheader against Maple Woods. Burkey remembers it being a beautiful day, and then the Raiders won both games.

“Overall, it was just a very memorable day,” he said.

He met his wife, Sharon, in 1990, and the two will soon be celebrating their 30th wedding anniversary.

“My family has sacrificed so much. Time, for the most part, for me being able to do this,” Burkey said. “They know it’s going to be a big change for me, but they were very happy. It’s something that I want to do and be able to spend more time with them.