The 2013 Bootheel Conference Player of the Year was taken 133rd overall by the Atlanta Braves in the June Amateur draft in 2013 after batting .600 with 10 home runs and 39 RBIs for Malden his senior season.

“Coming from a small town it was very different,” he said. “In high school there were a select few people in our area to talk with to find out what you are getting yourself into. Jumping from high school to rookie ball was a very mind-opening experience. You go in knowing you have been successful in high school and feel like you need to carry that success over.

“They have an interesting way of teaching you and almost try to prepare you for the experience of failure if that makes sense,” he continued. “I feel like I learned how to be a professional when I was playing rookie ball.”

Murphy was promoted to play Single A for the Rome Braves in 2015 and Advance A for the Carolina Mudcats in 2016. 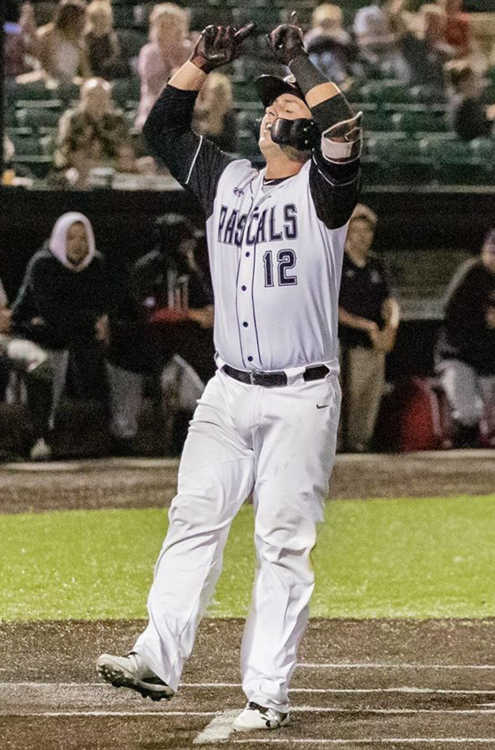 PROVIDED PHOTO
Malden graduate Tanner Murphy celebrates after scoring a run for the River City Rascals of O’Fallon, Missouri, in 2019.

”Adjusting at the plate was definitely my biggest challenge,” he said. “Defense has always been my strength. I’ve always been extremely comfortable catching guys.

In 2017 Murphy spent time playing for the Advance A Florida Fire Frogs before returning to spend more time with the Rome Braves.

On May 5, 2018, the Braves organization traded Murphy to the San Francisco Giants. Murphy played 40 games for the Advanced A San Jose Giants in 2018 before departing the minor leagues.

“The East Coast has much heavier air and is more humid so the ball doesn’t fly as much,” he said. “You hit balls that just ride in the air. Then when you get out on the West Coast the air is so thin balls carry. My first day playing on the West Coast after I got traded to the Giants organization I felt like I was playing on a Little League field.”

Since being drafted the right-handed catcher has caught multiple pitchers who have played in the major leagues.

“My first experience catching major league pitchers was my first major league spring training in 2015,” he said. “I went to camp and the entire Braves pitching rotation was there. Julio Teheran, Alex Wood, Mike Foltynewicz, and many more were there. Then after that guys like Mike Soroka, who I had played with earlier in my career, emerged with the Braves as an All-Star.”

Murphy has every intention of returning to a baseball diamond once the COVID-19 pandemic ends.

He is signed to play in the Prospect League for the Gateway Grizzlies of East St. Louis if baseball returns this summer.

“I had a great coach named Lee Elia tell me a long time ago, ‘You never quit until the game tells you you’re done,’” Murphy said. “Until you suffer a career-ending injury, the opportunity runs out, or something else comes up you don’t want to tell yourself you are done with the game. That’s kind of the way I see it and as long as the opportunity is there I’m going to try my best to play.”

The 25-year-old hopes to play well enough to return to the minor leagues at some point before his baseball career ends.

“I’m not really sure what is next for me after I stop playing baseball,” Murphy said. “You would think I would have that figured out by now but I’m trying to maintain the mindset I’m going to succeed and I’m going to get back. That’s kind of where my mind is at right now.”

Until baseball returns Murphy plans on spending more time than normal at home like many other worldwide.

“I get on ESPN a couple times a day just to see what MLB is coming up with,” he said. “But I don’t know what’s going to happen. It’s just a weird time right now.”