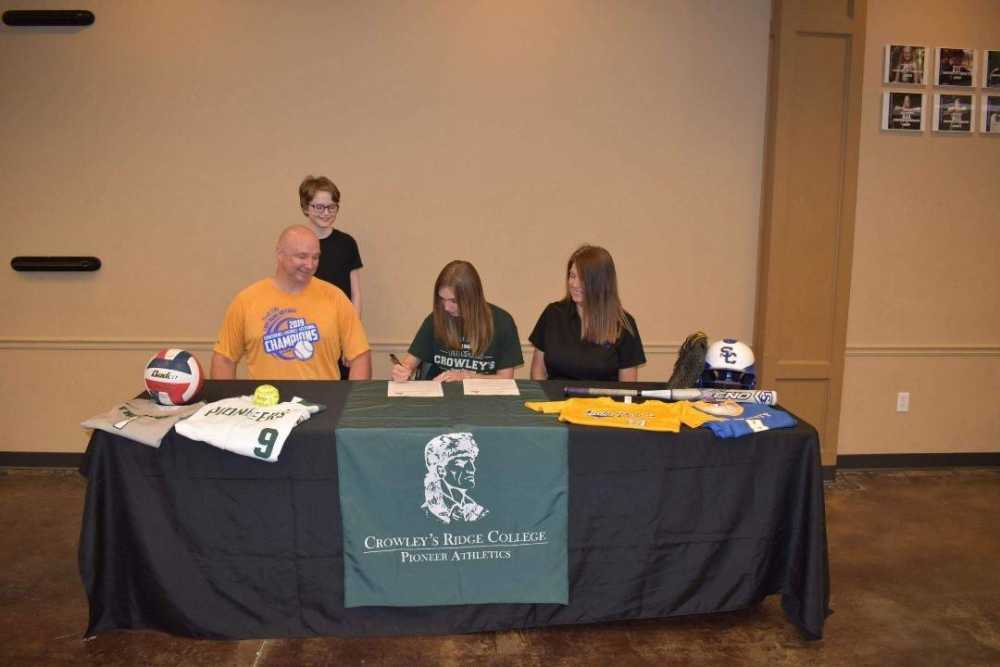 Scott City senior athlete Heather Conaway is joined by her family recently, as she signs a National Letter of Intent to compete in both volleyball and softball at Crowley's Ridge College in Paragould, Arkansas beginning in the fall.
Courtesy photo

Prior to her high school athletic career being cut a season short due to the coronavirus pandemic, Scott City senior Heather Conaway achieved a lot of success both individually, as well as helping the Rams succeed as a team.

That ability – and those results – caught the eyes of a couple of college coaches at Crowley’s Ridge College in Arkansas and so Conaway will be competing on a pair of athletic fields (volleyball and softball) next season for the school.

“Heather is going to be a player that I think will do a good job in whatever position she is placed in on the court,” Crowley’s Ridge volleyball coach Carissa Winn said in a release.

At Scott City, Conaway was named as the SEMO South Conference Defensive Player of the Year as an outside hitter.

She also was named to the league’s First Team, as well as being a Second Team All-District selection.

"She has an eagerness to compete,” Winn continued, “and will be a good asset to our team. She is primarily an outside hitter, but can also play all the way around the rotation.”

In softball, Conaway was a key contributor to a spring softball juggernaut over the past two seasons.

"We are happy to add Heather to our roster,” Crowley’s Ridge softball coach Jordan Malone said in a release. “She will add some speed to our line up and middle infield.”

Conaway was a Second Team selection at both the conference and District levels and excelled in the classroom, as well.

She was named to the Academic All-State squad in both sports.

“She shows a love for the sport,” Malone said, “and we are excited to see what she does as a Pioneer."