Jack Below latest in line of basketball-playing family members 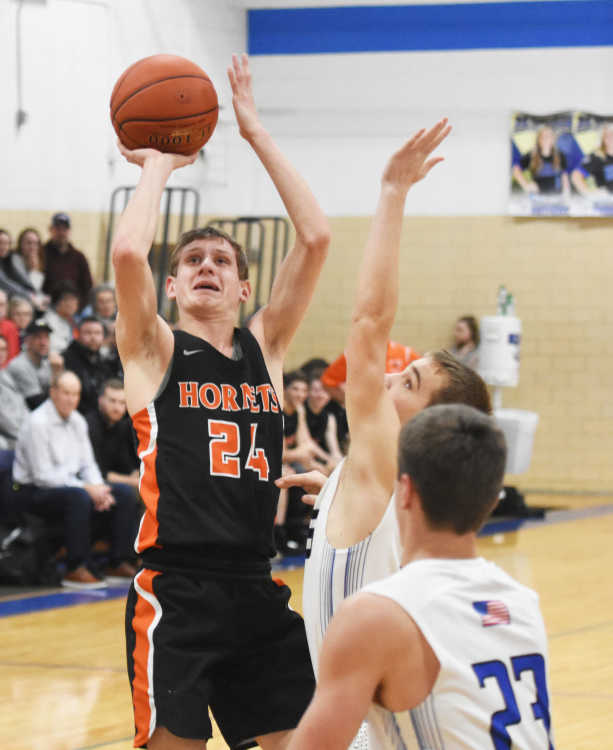 Advance’s Jack Below (24) shoots against Bernie during the first half Friday, Jan. 10, 2020 at Bernie High School.
DEXTER STATESMAN/Kyle Smith

Advance senior Jack Below comes from a long line of excellent basketball players.

Many have played the sport collegiately, and Below is hoping to follow in their footsteps.

Following a big senior season, Below was named to the Missouri Basketball Coaches Association's Class 2 all-state squad after averaging 33 points, 7.6 rebounds, 3.8 assists and 3.6 steals per game for the 23-5 Hornets.

He scored 50 or more points in four games, including a season-high 61 in Advance’s 108-105 win over district champion Delta.

“It was the craziest game I’ve ever played in,” Below said of the victory over Delta. “It was the highest scoring game I’ve ever been a part of. My dad’s family is from Delta. It really felt good (to win that game).”

Below scored 40 or more points seven times and surpassed 30 points on 14 occasions, including 36 in the Hornets’ 63-61, come-from-behind win over a struggling Richland squad.

“Landon (Dailey) and a couple of guys were out,” Advance coach Bubba Wheetley said. “We scored the last eight points to win. We were down one, and Jack got fouled and made both free throws. We’re up one. We trapped and Jack got a steal.”

Making the all-state team means a lot to Below.

“My brother didn’t get all-state until his senior year,” Below said. “I felt like I got snubbed my junior year. I averaged (26 or 27) points a game. It feels good to match my brother.”

Below hoped to follow in his brother Lane’s footsteps. His brother walked on at Three Rivers College and at Ole Miss and got scholarships both places.

Lane, a 2014 Advance High School graduate, was a graduate assistant at Ole Miss last season and alerted the coaching staff about Jack’s prowess on the basketball court.

“They looked at my stats, and they told me I could come down and have a tryout,” Jack said.

However, the COVID-19 pandemic caused stay-at-home orders across the country and the workout he was scheduled to attend April 15 was canceled.

Lane is looking for a coaching job at the collegiate level, and Jack hopes he could catch on wherever his brother lands or somewhere else.

Both of Jack’s grandfathers played college basketball — Johnny Below at Southeast Missouri State University and Bill Morgan at Three Rivers.

His uncle Jason Below and cousin Terrance Below played at TRC .

Jack’s father, Luke, was an all-stater at Scott County Central, and his sister-in-law Hannah (Noe) Below played at Southeast and the University of Evansville.

The Below family excels in volleyball, too.

His cousin Alanis Below, of Advance, played volleyball at John A. Logan College, and his cousin Alandry Below was an all-stater last season for the two-time defending state championship volleyball team at Advance. Alandry was also the leading scorer for the Advance girls basketball team last season.

His cousins, Coley and Lacey Blattell, were members of the Delta girls basketball team that won a district championship last season.

Below was a full-time starter for only his junior and senior seasons because the Hornets were loaded with talent during his freshman and sophomore years. Advance went 52-14 in those two seasons, including a final four appearance during his freshman season.

He split time between varsity and junior varsity his sophomore year and got to experience the postseason firsthand. The Hornets advanced to the state quarterfinals where they lost to eventual state champion Eminence. Below was the team’s second-leading scorer in that game.

“He just got better playing with these other guys,” Wheetley said. “He was playing against Armani, Carson and Michael in practice. He’s got that drive. He turned out to be an awfully good ballplayer.”

The trio taught Jack the value of hard work.

“I watched those guys everyday. They would push me,” he said. “They really molded me a lot, showed me what it takes to be an all-state player.”

“I got a little taste of it,” Jack said of his freshman season. “My sophomore year, we had a good year but we got beat by Eminence who won state that year.”

Advance took a step back during his junior season, finishing with a 12-14 record.

“There weren’t a lot of expectations my junior year,” Jack said. “I loved my teammates but we didn’t have as much talent. I got my confidence from scoring a lot of points. I had so much confidence I didn’t feel like anyone could stop me.”

Advance bounced back last season but lost 67-66 to St. Vincent in overtime during the district tournament semifinals.

“I had a lot of confidence that we would win (district) or at least get (to the championship game),” Jack said. “We had a terrible game. We were missing layups. I didn’t score a point in the first quarter. They were double-teaming me.”

He finished with 33 points despite a slow start and hit a long-range 3-pointer as time wound down to tie the score at 60 and force overtime.

He scored all six of his team’s points in overtime, including a fadeaway jumper to tie the score at 64 with 52.3 seconds to play.

Wheetley said Below’s attitude was a key to his success.

“You couldn’t ask for a better attitude,” Wheetley said. “He worked hard. He just had a knack for it. He had the talent and he’s got that winner in him. That was bred in him by his family. They all played. … He always loved to play. He’s just a good ballplayer.”

One of Jack’s strengths as a player is his ability to get to the free throw line and knock down shots.

“Jack gets to the middle of the court, he gets to the paint and he scores or draws a foul,” Wheetley said.

“My grandpa (Bill Morgan) tells me and my brother that free throws win games,” Jack said. “I always shot a ton of free throws.”

A pair of high school growth spurts aided Jack’s improvement as a player. He stood 5-6 during his freshman season, 5-9 his junior year and 6-1 his senior year.