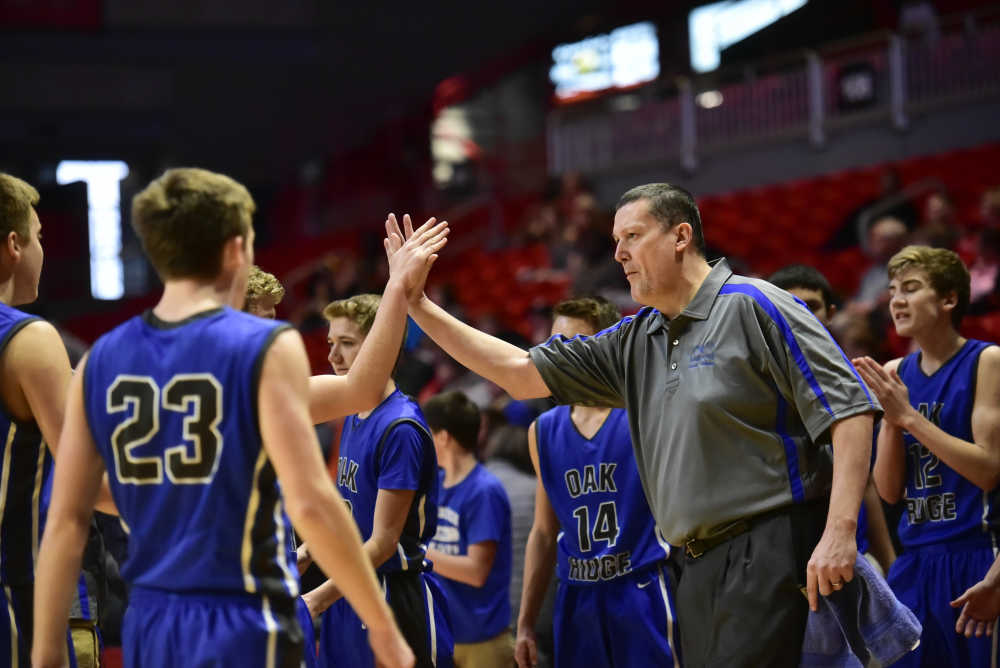 I understand you hail from back East.

What brought you to Missouri?

My dad was a plant manager for Tyson Foods and the company opened a new facility in Monett, Missouri and I’ve been here ever since. I was 12 at the time and in the seventh grade. My wife, Linda, is from Monett. We’re high school sweethearts and have been married 40 years.

How tough has the pandemic-necessitated sports shutdown been for you?

I have every game (I’ve coached) on film for 20-plus years and I’m watching them now because I’m sports-deprived.

Toughest game as a coach?

The first one which comes to mind was in 2014. I was coaching Valle Catholic then and we lost 68-62 to Scott County Central in the Elite 8. Valle had a real chance to win state (that year) had we beaten the Braves. That game plays on my mind repeatedly because I would have coached the last minute (of the contest) differently. I would have called a time out and schemed a way to get the ball to our best player.

Has there been a difficult defeat since coming to Oak Ridge?

In the 2018-19 season, when we went 20-8, we were playing Oran at their place. Oran is always a tough out. Two of our losses that year were to the Eagles. Coach Shoemaker’s son was an All-State player that year and he hit a 25-footer for a trey to beat us. It was the best game the Bluejays played all season and it was a loss.

Do all coaches replay losses in their heads?

I can only speak for myself but if I had to guess, then yes. It’s the “what if” that stays with you. The problem with coaching is I can forget a win, but I remember every loss of every big game and how we lost it. My wife has heard me mumble and complain about (losses) for my whole career. I can’t let (defeats) go.

You played the game, yes?

I started playing on a select traveling team in New Jersey when I was eight years old. We went to tournaments in Boston and Baltimore from 2nd through 6th grade. I was on cloud nine playing those tourneys. A big shout out to my parents who gave me the freedom to do that. I grew into a 6-foot-5 power forward in high school. I was “the man” there. In college, at Northeast Missouri State (Truman), I was a role player. It’s an adjustment you make in your mind when the level of competition goes up.

True, I’ve done football and track in my life too but for the last 12 years, including all the time I’ve been at Oak Ridge, it’s been basketball-only.

You’ve taught in multiple environments over the last four decades. How would compare them?

In my experience, there is a difference between public and private schools. Early in my career, I taught in O’Fallon, Shelbyville and Deepwater, Missouri, all public. I spent a bunch of years in private schools at St. Pius (Festus) and at Valle (Ste. Genevieve). To me, those two Catholic schools were more football and baseball oriented. Basketball felt secondary and the people were not as onboard with hoops. In the private school setting, again my experience, I felt at a disadvantage playing against public schools because of that attitude.

You came back to the public school with the Bluejays in the 2017-19 season.

And I consider my years in Oak Ridge some of the best in my coaching life. Basketball is king in southeast Missouri.

You had a challenge when you arrived.

I knew the program had been way down for awhile but also understood Oak Ridge had great fan support.

Oak Ridge hadn’t posted a winning record before the Trimmer era since 2013-14 and in two of the years before you got here, the Bluejays posted 3-19 and 3-20 seasons.

The program is going in the right direction, that’s true. I never think in terms of a win-loss record.

What’s your measure of success, then?

I look at whether we had an enjoyable season, were the fans satisfied in our accomplishments and did the kids hit their personal and team goals.

Most fans know about the two standout seniors in Layton and LeGrand who are graduating.

David Layton led MSHSAA in scoring as a junior with 943 points in 26 games (36.3 ppg). Most high school players are lucky to get 1,000 points in a career. David nearly did it in a single season. (Layton’s) knee trouble (patellar tendinitis) will keep him from playing at the next level but despite his condition, still put up 24 ppg as a senior. Zach LeGrand is one of the toughest and most dedicated kids I ever coached. David was our top scorer, but Zach ran our practices. If another player wasn’t giving 100%, (Zach) would be all over them. Zach never complained and did anything I asked of him. We have six seniors graduating, including all five of our starters.

No varsity starters are returning so we’ll take a step back, yes. We may start five sophomores next season. (But) I honestly believe if a group of kids could take Oak Ridge to the Final Four or beyond, it’s this group coming up. We have back-to-back classes now in high school who were a combined 55-1 the last two years.

You said you might start five 10th graders. Don’t you have rising seniors?

Yes, two, both of whom have been role players up to now, whom I’m sure will now think it’s their turn. Here’s the thing, though. I do love loyalty, but my job is to put the best five players on the floor. The best Bluejays quintet has yet to be determined.

Your coaching colleague, Chris Hahn at Delta, likes to get up-and-down the court as fast as possible. Run-run all the time is his strategy. You?

I’ve had up-tempo teams but year-in and year-out, that kind of basketball is hard to achieve. I try to base my offensive scheme based on the personnel we have each year.

What do you teach in the classroom?

I retired from teaching at Valle four years ago, but my specialty was college-prep government and American history.

Tell me about your family.

It’s just Linda and me. We don’t have biological children of our own. My kids have always been my teams. My wife was a cheerleading sponsor for several years and she kept the sideline scorebook of 20 years. A coach’s spouse endures what you’re going through. If you don’t have great spouse support, the job is impossible.

You told me about something Linda made years ago.

She made a homemade sign in 1982 just as I was starting out, which read, “We interrupt this marriage for basketball season.” It still hangs in our kitchen. My wife is first, then basketball.