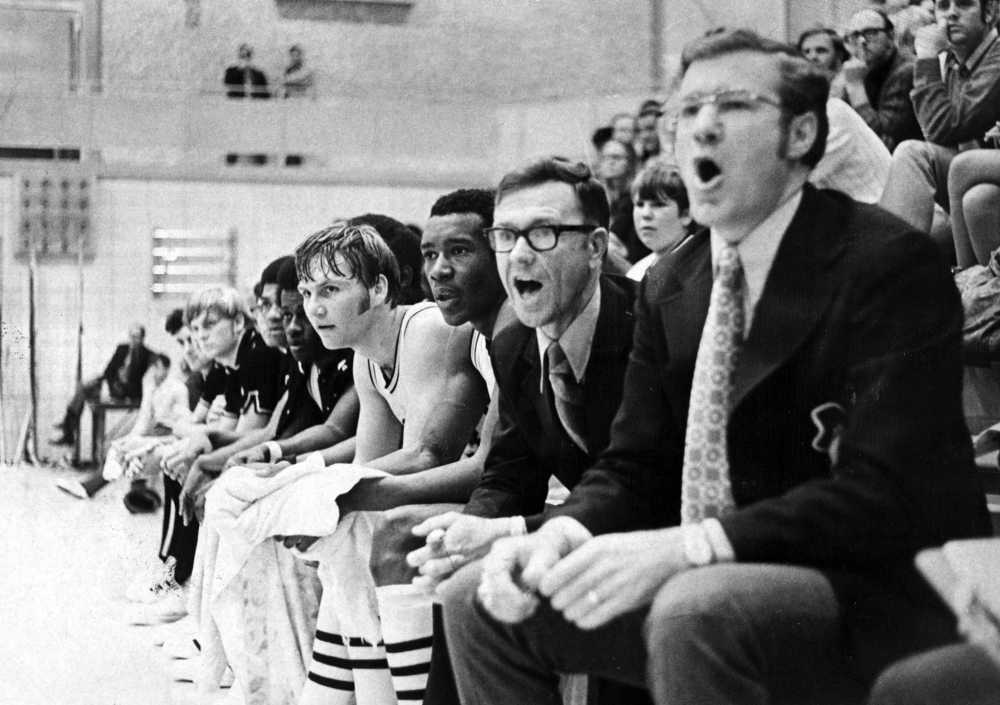 Gene Bess arrived in Poplar Bluff in the fall of 1969 to be an assistant coach at what was then called Three Rivers Junior College. He told his wife Nelda not to unpack much in case he didn’t make it.

The program was in its third season, coming off a losing year and didn’t have a gym to practice in. A year later, Bess was in charge.

Bess, who retired as head coach after 50 seasons and 1,300 wins, also recommended that his assistant coach be promoted to lead the Raiders, who now play in a state-of-the-art arena on a sprawling campus.

“I think it’s time for him to get control and go for it,” Gene Bess said of Brian Bess, who has been by his side on the bench the last 27 years.

Brian Bess will be the third coach of the Raiders since the program tipped off in 1967.

Bob Cradic, who hired Gene Bess, left to become the head coach at Southeast Missouri State University and recommended his assistant be promoted.

Before the decade was done, Three Rivers claimed its first national title.

“I had no reservation at all recommending him as my successor,” said Cradic in a 2006 interview. “I wouldn’t presume that I could actually envision he would set all the records and have the kind of career he’s had, but that doesn’t mean that I didn’t recognize his talent and that he was certainly going to be a success.”

From 1978-84, the Raiders won at least 30 games and had an 83-game home winning streak that set a junior college record. In the early ’90s, they went on another five-year tear and averaged a 32-5 record, including their second national title.

Marvin “Moon” McCrary was on the Raiders’ first national championship team and went on to play at Missouri before being drafted in the fifth round by the Phoenix Suns.

Then there are all the guys who aren’t nationally known but found success in one profession or another.

“I’ve got a bunch of former players out there who are doing well, and that’s probably the greatest satisfaction I get out of life is seeing those guys do well,” Bess said. 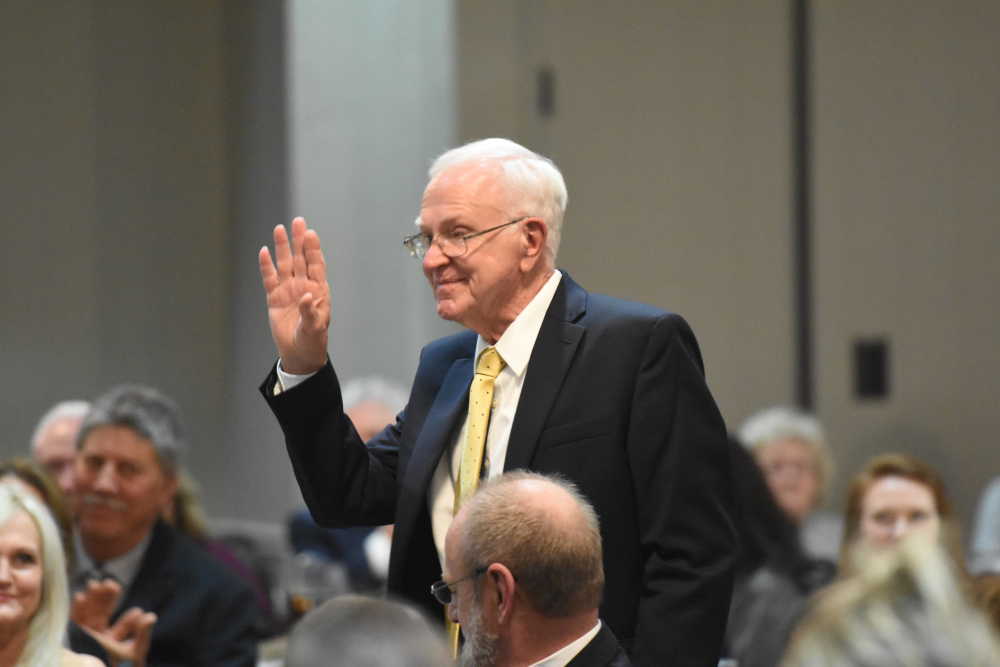 Three Rivers' Gene Bess announces retirement
Daily American Republic ~ Scott Borkgren
College basketball's all-time wins leader has retired. After 50 years and 1,300 wins, Three Rivers College men's basketball coach Gene Bess announced this past season will be his last. "I've been realizing the time was near for me to go. The bottom line is, I want to be here to make the players better," said Bess, who has battled health problems...

A handful of years older than his players when Bess first started, he had trouble finding his role in the beginning.

“I was trying to be both the adult side and the kid side. I started realizing that that wasn’t working,” Bess said.

Bess remembers two high school teachers he had growing up — one was demanding and the other was kind. Bess didn’t really like the taskmaster, but as he got older and looked back on his basketball career, he saw that was missing.

“When I was in high school, I didn’t want my coaches coaching me much. But then a little later on, I started thinking, ‘Hey, I’m not as good as I should be.’ Somebody out to have kicked me upside the head, gotten my attention and coached me. That’s really what we are after, are the results. To be the best you can be, you have to zero in and there is no room there to be casual and go through the motions. Because nobody wants to be average.”

To this day when the ’79 national championship team gets together, they complain about Bacon Park, but with smiles on their faces.

For decades Bess has used the half-mile sidewalk loop that winds through the public park for preseason conditioning as well as discipline.

“There are no shortcuts. He is just out there in the woods waiting for you if he sees you walking around,” said said Dominic Okon, former Raider, Three Rivers assistant coach and current Director of Men’s Basketball Operations at Wichita State, who never had to run disciplinary laps during his two years at Three Rivers.

“It’s part of the discipline,” Okon continued. “Once you’re done you feel good about yourself that you are done and you made it ... That stays with you for the rest of your life.” 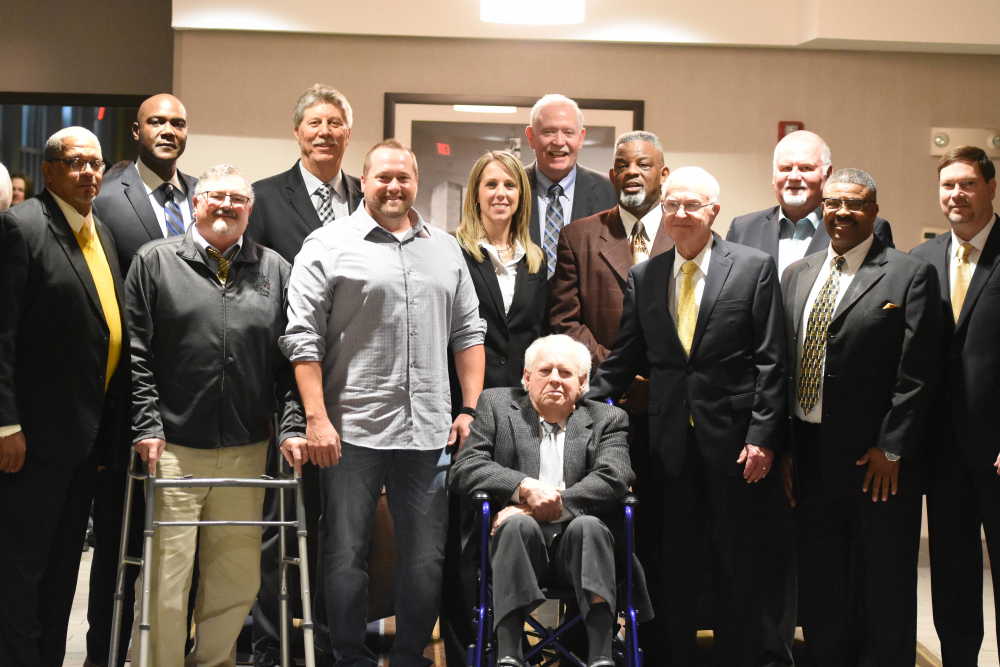 Three Rivers inducts inaugural Hall of Fame class
Daily American Republic ~ Scott Borkgren
It was a sold-out crowd for Three Rivers' inaugural Hall of Fame Class. After years of planning and months of hard work, Gene Bess, Paula Corder King, J.P. McLane, Matt Palmer and the 1979 National Championship Raiders were inducted as the first class at a banquet Friday at the Holiday Inn in Poplar Bluff...

Born in the middle of the Great Depression, Bess grew up on a farm near Jackson, Missouri. He went to high school at Oak Ridge, graduated from Southeast Missouri State University and started coaching high school basketball in 1957.

His 1969 Oran team finished 34-1, losing the state championship game after a late controversial call. Fred Johnson was shooting free throws with 12 seconds left and Oran trailing by two points. He made the first foul shot but was denied a second attempt for violating the 10-second rule. Dixon, which was unbeaten and featured future Missouri Tiger and NBA player John Brown, won 76-74. https://www.semissourian.com/story/1947155.html

Johnson and another player from that team signed with Three Rivers and Cradic invited Bess to become an assistant.

Bess won his first game as head coach, 86-81 over Phillips County, but the Raiders were 14-9 before winning nine straight to claim a conference and regional title.

Bess and the Raiders won their first game at the national tournament, 100-75 over Niagra Falls (N.Y.), then lost to hometown Hutchinson (Kan.) before winning twice to place fourth and finish 27-10.

The roster featured two players who became hall of fame coaches with over 500 wins each at the high school level— Lennies McFerren and Paul Hale.

Three Rivers chipped away before tying the game with 2:27 left in regulation. Sam Weaver forced overtime with six seconds left and the Raiders held on for a 60-59 win over Mercer (N.J.) to claim the title.

“These kids just won’t quit,” Bess said after the game.

The previous night the Raiders needed two overtimes to outlast West Texas coached by Nolan Richardson. Weaver scored 34 points in the semifinal and was named the tournament’s Most Valuable Player.

Thirteen years later, the Raiders trailed by 21 points at halftime in the national semifinal against Southern Idaho.

“We came out and they were holding up signs that said, ‘Raiders Don’t Quit,’” said Brian Blackburn after the game. “I think that kind of helped get us going and we kind of caught (Southern Idaho) by surprise with our 3-point shooting.”

Long-armed Justin Wimmer blocked a shot in the closing seconds of the national championship game as Three Rivers held off Butler County (Kan.) 78-77.

The Raiders won their four games at the national tournament by a total of 12 points.

“We’ve really got to be proud of our kids because there were so many times in the tournament that they could have folded,” Bess said at the time. “I love these guys dearly.”

After just 14 seasons leading the Raiders, Bess was inducted into his first hall of fame when he became the 11th member of the Poplar Bluff Sports Hall of Fame.

Cradic was also honored that year.

The plaque lists Bess’ accomplishments as such:

“Recognized as one of the top College Basketball Coaches in the Nation… As Head Coach at Three Rivers Community College, his “Raiders” won the National JUCO Championship in 1979… From 1971-1981 his teams were in National Tournament six times… Was named Junior College “Coach-Of-The-Year” in 1979… Assistant Coach of the United States National Team that won World University Games… Coaching Record at Three Rivers Community College from 1971 through 1983 shows 370 wins and 94 losses.”

Bess and the Raiders won another 930 games and a second national title in 1992. There were also two more appearances in the national final with heartbreaking endings — a four-point loss to hometown Hutchinson (Kansas) in 1994 and an overtime loss to Howard (Texas) in 2010.

Three Rivers reached the national semifinal and finished third in 1978 after an answered prayer lifted the Raiders over eighth-ranked Mineral Area in the region semifinal.

The Cardinals missed a foul shot with four seconds left and a three-quarter length pass set up the game-winner at the buzzer by Otto Porter.

“We’ve practiced that play five or six times this year,” Bess said at the time.

The Raiders won a best-of-3 series with State Fair in the final game by a point — on Bess’ 43rd birthday.

After winning the district playoff behind double-doubles from three players, the Raiders upset nationally ranked Vincennes (Ind.) in overtime and won by five in the quarterfinal.

The Raiders, however, ran into the defending national champs and lost 84-68 before finishing third with a 14-point win over the team many considered the favorite at the start of the tournament.

Porter was named to the all-tournament team and Danny Foster became the program’s first All-American.

Bess had only two returning players on the roster for the 1978-79 season — Sylvester “Sly” James and Marvin “Moon” McCrary — and his assistant coach left to take a job at Saint Louis University. Roger Pattillo returned to serve as an assistant and lead the baseball program.

Little was expected of the team but they won 20 straight and were ranked fourth in the nation. In the best-of-3 region final, the Raiders lost the opener by a point to a State Fair team with a losing record. McCrary and James had double-doubles in a 24-point win to force a decisive third game that Three Rivers won 76-61 led by Weaver’s 24 points.

Three Rivers returned to Kansas in 1980 looking to defend its title but ran into a hot-shooting Yavapai (Ariz.) team in the quarterfinal. The Raiders ended up fifth in the tournament.

In his first 11 seasons, Bess took six teams to the national tournament.