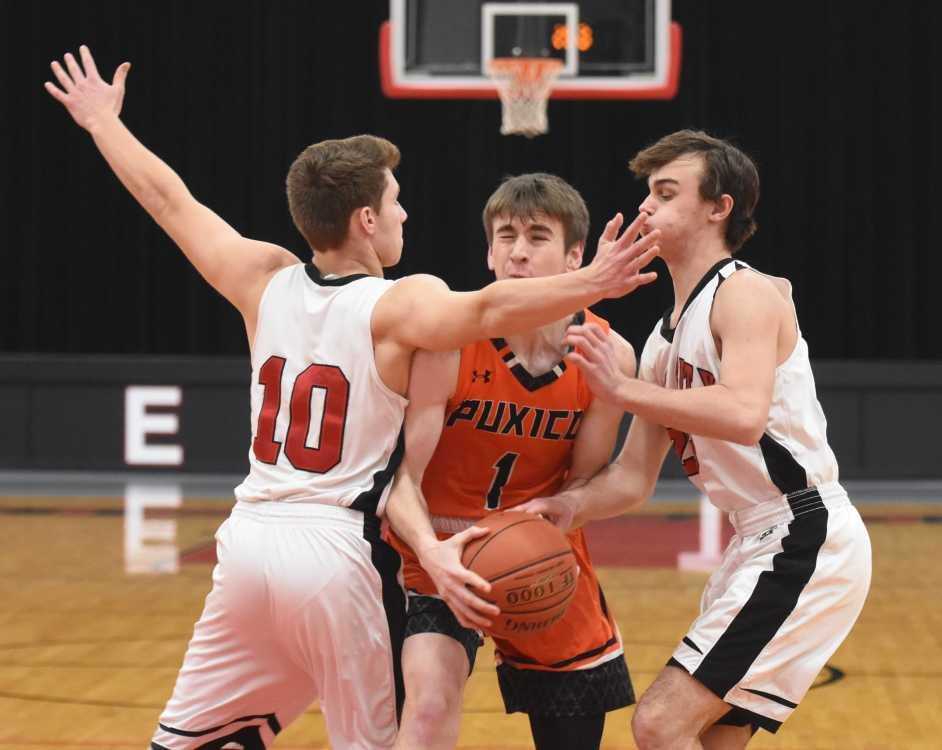 Puxico's Matt Caldwell (center) is cut off by a pair of Bell City defenders during the SCAA Basketball Tournament on Jan. 31 at the Bearcat Event Center.
DEXTER STATESMAN/Kyle Smith

Puxico senior Matt Caldwell said that Eccelsia College in Springdale, Arkansas, felt like home and offered him an opportunity to play right away.

“I liked how small it was. It reminds me of my high school,” he said. “There are only about 190 kids. … Everybody greeted me and shook my hand. They were super friendly and nice. Everything was so close together. You don’t need a car. Everything is in walking distance.”

Caldwell, who averaged 10.6 points and seven rebounds a game for the Indians last season, is confident he will get an opportunity to play during his freshman season.

“I have confidence in myself,” he said. “I believe (I’ll get to play). The way things went in practice and scrimmages, I like my chances.”

“I expect great things from Matt as he sets this as a goal for himself (and) continues to strive to that end,” Jones said. “I still see Matt at the courts, a lot of times by himself, getting better. Matt is a hard worker both on and off the floor and a genuinely good person. I have really enjoyed coaching him, watching him overcome obstacles and watching his growth, both with basketball and more importantly, personally.”

Caldwell considers his intelligence his biggest asset as a player.

“I have a high basketball IQ,” he said. “I know what to do, when to do it and how to do it. I call myself a smart player. Nothing fancy, I just get the job done.”

“It was a slow comeback,” he said. “I eased back into it but it’s completely healed now.”

Jones said that Caldwell was playing some of his best basketball prior to the injury.

Caldwell had scored in double figures in six of his previous seven games, including a season-high 30 points against Twin Rivers. He averaged 15.9 points over that stretch.

“What made Matt exceptional this year was his growth as a man and the way he embraced his role as a team leader, not just with his play but with his attitude toward the younger kids in our program,” Jones said.

“It was very important. We needed that one person to step up,” he said. “There was a lot of selfishness. That needed to be taken care of. … What I said made sense to them. We needed that leader.”

Caldwell expects to play shooting guard for the college located in northwest Arkansas.

“I scrimmaged with them up there, and (shooting guard) was mainly what I played,” he said.

Caldwell plans to earn a degree in sports management and become a coach.

“Start somewhere small and work my way up,” he said. He would love to coach at the college level someday.