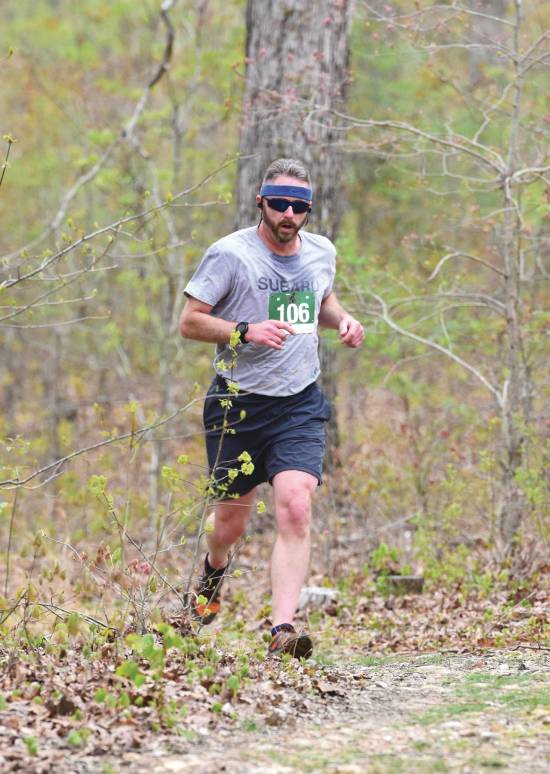 POPLAR BLUFF — The 2020 Wolf Creek Trail Run ultimately had 34 people and one dog complete the course despite no official race actually taking place.

Amidst social distancing, organizers opted to allow anyone who registered and wanted to compete to run the trail on their own and report times on the honor system. The annual spring event still raised around $3,700 for Kiwanis Bacon Park.

“I want to thank all of those who stuck with us during this change in the event and ran/walked/biked,” Greater Poplar Bluff Area Chamber of Commerce President Steve Halter said in a statement. “We were one of the first running events in the country to choose a virtual race vs. postponing the event.”

The overall half marathon winner was William Shell, who completed the course in 1 hour, 39:36 minutes. Jared Hicks won the 6K in 27:08 and the overall 6K dog winner was Eddy the Dawg, who belongs to Kenny Rowland.

Matt Smith completed the 12-mile bike course in 53:45 and was the only bike competitor.

Katelyn Kester was the top finisher for the women’s 6K race in 36:03 while Kim Whobrey finished second in 47:45.

Fifty-two people registered for the event and Halter added if the chamber missed someone or you didn’t turn your time in, they apologize and feel free to contact Halter at 573-429-8361.

In the 6K, Brian Kelpe’s time was nine seconds slower than Hicks for second place in the men’s division. Both runners competed in the 36-50 year-old division.

All of the 13 entrants in the half marathon earned a large medal.

“I also would like to thank Kenny Rowland and Brock Littles, who are also race coordinators,” Halter said. “Ed Sherman and Jon Stansfield, with the U.S. Forest Service, are great partners. I would also like to thank (chamber staff Samantha Bacon and Jeannette Townsend), my fellow Kiwanians and all of our incredible sponsors: Poplar Bluff Regional Medical Center, FCC Behavioral Health, Walmart Supercenter, Southern Bank, Rowland Family Dentistry, Total Alignment Chiropractic, Butler County EMS and Hillcrest Animal Hospital. The event will be April 3 next year and hopefully, we can go back to how we have conducted the race for the last six years.”