Dexter's Wyman achieves No. 1 ranking but doesn't get chance to enjoy it 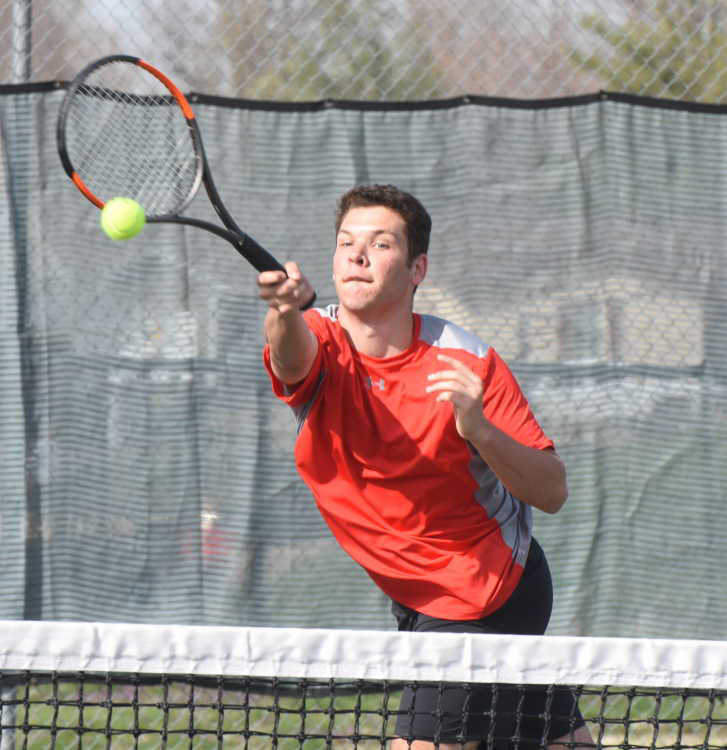 In this March 27, 2019 file photo, Dexter's Logan Wyman hits a volley in a doubles match at T.S. Hill Middle School. Wyman was set to begin the season as the team's No. 1 singles player, but the COVID-19 pandemic wiped out his senior season.
DEXTER STATESMAN/Kyle Smith

Dexter senior Logan Wyman finally got his chance, but the COVID-19 pandemic deprived him of an opportunity to enjoy it.

Wyman, a four-year member of the boys tennis team, worked his way up to the No. 1 spot for his senior year after playing No. 3 singles during his sophomore and junior years.

“It was a solemn time when I realized I was going to miss my senior season,” he said. “Tennis was always something that I enjoyed and brought me a ton of new friends.”

He played behind state qualifier Eric Hahn and Nate Gargas the past two seasons but was coming off an 11-1 season.

“I was really looking forward to facing the best players from other teams,” Wyman said. “I wanted to prove myself after playing behind the two best players in the district for the last two years.”

The Bearcats were in the hunt for a third straight district championship, and Wyman liked his team’s chances.

“I expected to win a third consecutive district title and have had a lot of success with my doubles partner Ryder,” Wyman said.

In doubles a year ago, he went 16-9, partnering with junior Ryder Boles for most the season.

“I believe we would have been the best doubles team in the area,” Wyman said. “We expected to win any tournament we entered this year and make it to the state tournament in Springfield.”

“Logan has really started to understand the nuances of the game much more,” coach Boles said. “Young men taking up tennis in high school think they should just go out and hit the ball as hard as they can and that will lead to success. Logan has really started to understand that winning a point, a game or match takes patience, planning and execution.”

“He taught me that I'm not perfect,” he said. “I’m not gonna win every point, not gonna hit every shot. Not even the pros do that. What I had to learn to do was put the last play behind me and not dwell on it or act out on it. He was instrumental in helping me conquer that mental barrier and always helped me when needed.”

Expectations were high for Wyman this season, according to coach Boles.

“In singles he was going to face a serious challenge (Jackson, Notre Dame, Sikeston were all returning their No. 1 players),” he said. “He was going to have to play No. 1 this year moving up from No. 3 and playing many who had more experience at that level than he does.  However, he and his doubles partner (Ryder Boles) made it to sectionals last year and came very close to qualifying for the state tournament.

“There was every expectation that they would take the next step this year. They would have been the most successful returning team in the district tournament. I was really looking forward to see him qualify for state as a senior.”

Wyman was a member of the boys basketball team for four years, but he tried his hand at several sports growing up.

“I played baseball every weekend of every summer growing up,” he said, “and played football in middle school. I ran a little track in the first grade, but decided that wasn't for me.”

He gave tennis a try during his freshman year, but basketball is his favorite sport to play.

“I love tennis, but I've played basketball with my best friends for over a decade and it will always be my favorite sport,” he said.

Not only has the school shutdown been hard for Wyman, the tennis player, but also as a student.

“This break has been pretty tough on me,” Wyman said. “I miss seeing my friends and teachers everyday, and I miss having something to wake up for in the morning. That being said, I know God has a plan and that everything happens for a reason.”