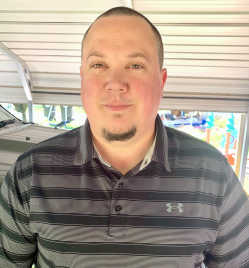 Matthew Ball didn’t pass up a chance to coach at his alma mater when the opportunity presented itself.

Ball, who is a 2004 graduate of North Pemiscot High School near Wardell, Missouri, signed a contract to be the new varsity boys basketball coach in his hometown earlier this month.

“The position became available after everything shut down in the middle of March,” Ball said. “That’s my hometown so it’s an opportunity I jumped at and I’m really excited to get the job and be a head coach again.”

Ball, who majored in education at Southeast Missouri State University, was the middle school boys basketball coach at nearby Hayti High School in the 2019-20 school year.

Before arriving at Hayti, Ball coached varsity boys basketball at Delta C-7 High School in Deering, Missouri, from 2017 to 2019.

“Basketball has always been my first love,” Ball said. “When I first started teaching we were building a family so I didn’t really get into coaching. Then an opportunity came up to be a head coach at Delta C-7 a couple years ago when I was teaching at Hayti. It felt like it was the right time to get into coaching. It’s a passion and I cannot see myself not doing it moving forward.”

Ball inherits a program in search of its first varsity victory since the 2017-18 season. North Pemiscot has lost 60 straight varsity contests dating back to December 15, 2017, when it beat Southland.

“I know the last couple years the program has been down but I see this as an opportunity to go back and try to generate some excitement,” Ball said. “I really want to get that program competitive again. North Pemiscot is somewhere I want to be and stay so I want to put some roots down and do the best I can to build that program back up.”

“I really haven’t got a chance to evaluate the players yet,” he said. “I do know there were a couple sophomores that will be juniors that should come up and help us out on varsity. But I haven’t had a chance to work with them yet.”

Ball enjoyed his own success when he played high school. North Pemiscot finished runner-up to Hayti in the Class 2, District 1 title game during Ball’s junior season in 2003.

“We lost the district championship to Hayti in 2003,” Ball said. “It was on our home court and we were still in Class 2 back then. Hayti had William Moore and Dallas Wanda that year. But we had a good team when I was in high school.”

Ball wants his players to adopt a defensive-first mentality on the court.

“I’ll be flexible based on the players we have on our roster,” he said. “But I do like to play an aggressive style of defense. We’d like to press man-to-man and mix in some zone. On offense, I’ve always preferred a motion offense with four out and one in or five out. I’d like to mix in some set plays. But we really want to be aggressive and push things with our defense.”

Ball has the luxury of being familiar with the style many of the other coaches play in the area. North Pemiscot competes in the same conference Delta C-7 played in when Ball served as head coach at Delta C-7.

“I got to know a lot of the current coaches in the conference when I was at Delta C-7,” Ball said of the Tri-County Conference. “I’m looking forward to competing against Coach Blankenship, Coach Bidewell, Coach Mathis, Coach Stormes, Coach McGowan, and all the other really good coaches in our conference. It helps that I’m familiar with those coaches and the area. It’s just a really good fit for me to be back at North Pemiscot.”

Ball said he has yet to have an opportunity to meet with his squad. School and sports activities have been suspended due to the COVID-19 pandemic since Ball accepted the job.

“I’m excited to get started,” he said. “Hopefully, everything gets back to a new normal this summer so we can get going. The plan is to make a summer schedule for open gyms so we can get together and play and also get in the weight room. We want to make a schedule but we may have to cancel our plans after we make one. Everything is still in flux and we just don’t know yet.”