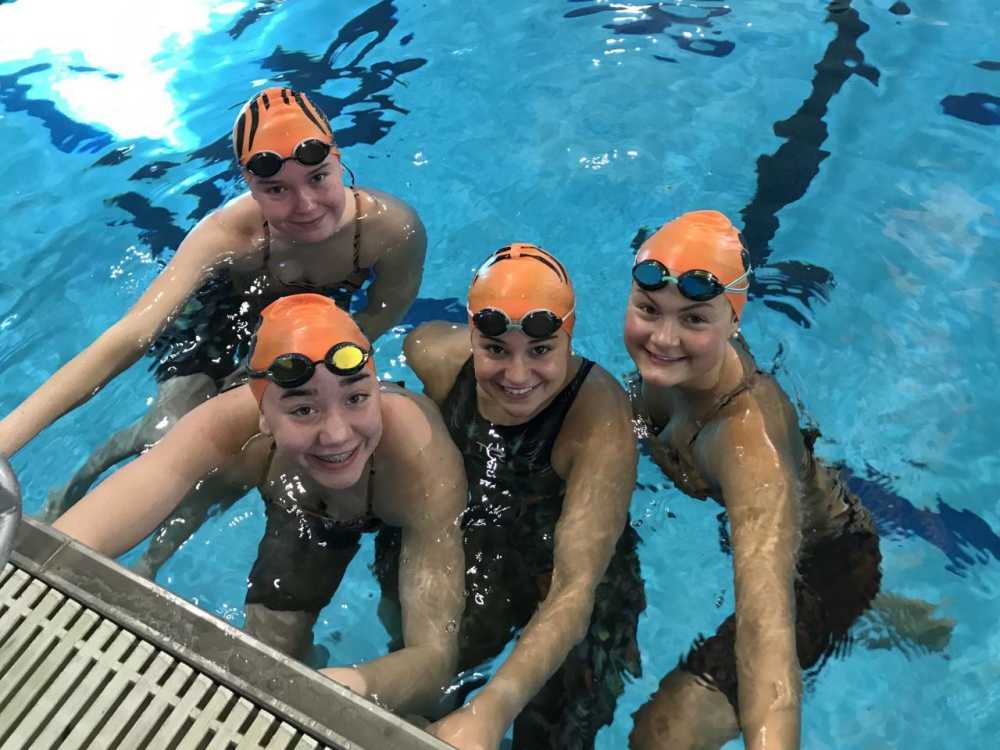 The Cape Central 200 medley relay team of (from left) Grace Sanders, Lauren Lamar, Bella Dennis, and Ava Duncan celebrate following its victory in the MSHSAA Class 1 State Swim Finals at the St. Peters (mo.) Rec-Plex in February. Duncan is the 2020 Southeast Missourian Swimmer of the Year, while Sanders, Lamar, and Dennis each made the All-Southeast Missourian Swim/Dive Team.
photo provided

“We had a lot of girls,” Powell said, “and I don’t know if it was stress or what, but there was some negativity. (Ava Duncan) had this positivity. ‘It was a great thing to be here. It’s exciting.’

“She really put that attitude in front of the team and she got my Coaches Award this year because of that.”

The Cape Central junior rode that “positivity” to four finishes in the top 11 places at the 2020 MSHSAA Class 1 State Championships and because of that, she is the Southeast Missourian Girl Swimmer of the Year.

The improvement of Duncan over her three seasons has been remarkable, and that development showed immediately in each of the past two state finals.

The Tigers were the defending state champion this season in the opening event, the 200 medley relay, but had graduated one of the fastest butterfly swimmers in the state (Allison McDonald).

“As a sophomore,” Powell said of the 2019 squad, “Ava put this magic relay together that I don’t think anyone in the state saw coming.

“We had played around with that relay throughout the year, with different people in different spots, but Ava’s spot never changed. She has always been our go-to backstroker.”

No one envisioned a state championship in 2020, despite the return of Duncan, sophomore Bella Dennis (breaststroke), and junior Grace Sanders (free), and the addition of sophomore Lauren Lamar in replacing McDonald.

Cape Central had the fifth-fastest seed time coming into the meet behind favored Parkway Central, and the Colts’ foursome showed why it was expected to win by beating every other squad in the prelims.

Parkway Central’s time of 1:51.37 was almost a full body length faster than Cape Central, however, the Tigers produced a shocking sequel to their 2019 performance by racing to the title in a 1:50.91 behind phenomenal legs by Dennis and Lamar, which allowed Sanders to cruise home.

As a freshman, Duncan had the slowest backstroke split of the eight finalists competing in the relay race.

Her time improved nearly 2.5 seconds by her sophomore season and she dropped nearly another half-second in the race this year, which was only topped by two other competitors.

“She’s been our go-to backstroker since her freshman year,” Powell said. “We’ve seen her develop that backstroke, and of course, she has had a strong commitment (in the off-season) with River City Aquatics. She is committed to trying to get faster.”

A year later, her time had dropped to 1:02.09 (placing 11th) and she qualified in the maximum possible four events (two relays and two individual events).

This year, she again advanced in four events and placed in each.

“She had the goal as an individual (to go 1:00.0),” Powell said, “and of course, she wanted to have a great lead-off in the relay. I not only have seen her commitment from two years ago come through but also that positive attitude of enjoying the competition, all of it coming together.

“You love to see that in your athletes when everything comes together, at the same time, the hard work, the attitude, and everything. That is how I would describe Ava. It was just kind of a perfect season.”

The junior made the finals in four events at the Class 1 MSHSAA State Finals and led-off the winning 200 medley relay squad, while also setting a school record in the prelims of the 100 back.

The sophomore helped the Bulldogs finish 16th in the 200 medley relay (swimming the butterfly leg) and 22nd in the 200 free relay.

The sophomore breaststroker swam a critical leg of the state championship 200 medley relay squad, as she overtook the top-seed Parkway Central team midway through the race. Individually, she finished sixth in the 100 breast and 25th in the 100 fly, while also helping Cape take ninth in the 400 free relay.

The sophomore qualified for the MSHSAA Class 1 State Finals as an individual in both the 200 free (placing 22nd) and the 100 back (18th).

The sophomore was the lone new swimmer on the defending state champion 200 medley relay team, but her tremendous butterfly split of 27.28 set the stage for the clinching free leg swam by Grace Sanders. She made the finals in three other events, finishing ninth (400 free relay), 14th (100 free), and 16th (50 free).

The junior diver missed advancing to the finals at the MSHSAA Class 1 state meet by one place, as her score of 228.30 finished 17th overall.

The junior freestyler clinched a state championship with the anchor leg of the 200 medley relay squad, as favored Parkway Central tried to chase her down. Just minutes later, she swam to a 16th place finish in the 200 free. Sanders also placed 26th in the 500 free and helped the Tigers take ninth in the 400 free relay.

The sophomore swam the anchor freestyle leg on the 16th-place 200 medley relay squad, while also taking part in the 200 free relay that placed 22nd.

The sophomore diver advanced to the MSHSAA Class 2 State Finals on the momentum of a record-setting performance at the SEMO Conference Meet. Wyatt defended her 2019 title by narrowly beating 2018 champion Paige Bradley of Poplar Bluff with a score of 439.55, which topped her record set a year earlier of 415.40.

The junior backstroker led-off the 16th-place performance in the 200 medley relay, while also competing on the 200 free relay, which placed 22nd.

This article will be published in the Weekend edition of the Southeast Missourian.