It wasn’t the photo finish at the state tournament the Kennett senior golfers had hoped for in 2020.

But the grand finale was still uniquely memorable.

“We are going to miss them,” Kennett golf coach Jim Vaughan said. “I was looking forward to having a senior season with them. They are fun. We’ve had a good time together and at the same time they have displayed a good work ethic. I’m going to miss everything about them.”

Two-time defending district champion Kennett, which placed sixth at the Class 2 state tournament last season, returned all five starters and looked to be in a position to make a significant postseason run this spring.

“We knew we had experience coming back and having three seniors on varsity was going to be a huge asset for us,” Vaughan said. “They worked really hard after we left the state tournament with a little bit of a bad taste in our mouth last year. They worked hard in the summer, fall, and even some in the winter months. You could tell the ball striking and scoring had improved for the entire team heading into the spring and the three seniors really helped guide the way toward our team’s improvement. Golf is an individual sport but you feed off of each other as a group when you are getting better.”

Kennett missed out on a chance to achieve its team goal of garnering a higher finish at the state tournament than it did last season when spring sports were cancelled nationwide due to the COVID-19 pandemic.

“It’s not even bitter sweet it’s just bitter,” Vaughan said. “We don’t get to realize what we thought we were going to be capable of doing this year as a group. It’s a tough pill to swallow. We had goals such as finishing better at the state tournament than we did last year. And we didn’t get an opportunity to achieve our goals. We are not in a different boat than anyone else but it’s hard for us as a group to swallow that we didn’t get that opportunity to compete.”

A mock state tournament opening tee off ceremony followed on Hole One at Kennett Country Club. Each senior golfer hit a tee shot during the mock tee off.

“I love to see young kids picking this game up,” Vaughan said. “We’ve got a guy out here at our course that is 92-years-old that still comes out here and plays. It just proves golf is something you can do for a very long time. These three can go off to college and come home and schedule a golf outing together. It’s not as easy to do that in other sports where you need a certain number of players to compete.” 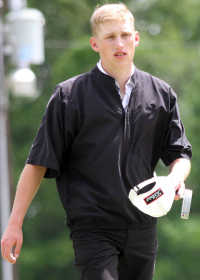 “I never dreamed of making the state tournament when I was a freshman,” McHaney said. “When I finally qualified for state my junior year it was so surreal for me. I took that experience in and was going to carry it over into my senior season this spring.”

McHaney said his most memorable golfing moment was hitting his third shot on a Par-5 onto the green at Crown Point Golf Club in Farmington.

“I was about 185 yards from the green with the wind in my face,” he said. “Coach Vaughan encouraged me to go for it. I eventually did and managed to hit it on the green and keep it out of the water.”

McHaney plans on majoring in business at Ole Miss.

“I plan on studying business in college and seeing where that takes me,” he said. 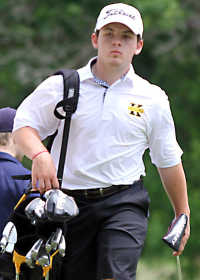 “Going to the state tournament was definitely the highlight of my career,” Faulkner said. “We hoped to get back this year but unfortunately the enemy got us and we couldn’t accomplish that goal.”

Faulkner said his most memorable golfing moment was the time spent at the state golf tournament in Springfield as a junior.

“I really enjoyed spending time with the team for a couple nights at the state tournament,” he said.

“My grandpa was a farmer,” he said. “I’ve always liked farming because I like being outdoors. Grandpa has motivated me to go into the farming world.” 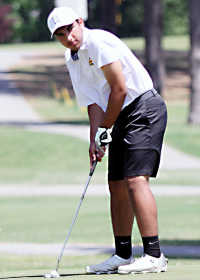 “I plan to golf for the rest of my life,” Jain said. “I’m glad I got this experience the last four years and got to play for great coaches and with some great players. I think it will be really useful moving forward.”

Jain said his most memorable golfing moment was helping his team win a Class 3 district championship his sophomore season.

“I was the fifth ranked golfer,” he said. “Our No. 3 golfer had a rough day so my score had to be used. I shot 90 and we won a Class 3 district for the first time in 23 years. It was really memorable to be able to finish that win out for us.”

Jain plans on pursuing a degree in journalism at the University of Missouri.

“Since October I’ve been working for the Delta Dunklin Democrat and I’ve really enjoyed the experience,” he said. “I really like writing and think I would enjoy journalism.”