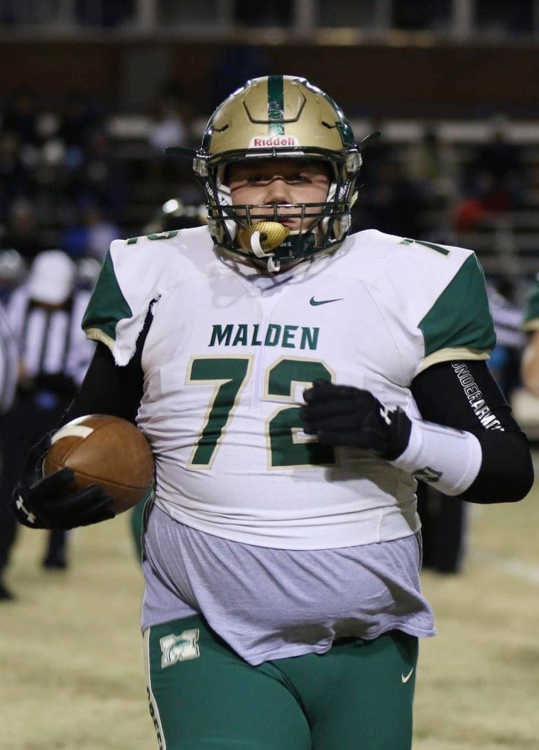 PROVIDED PHOTO
Malden lineman Garrett Rackley heads toward the sideline after making a tackle in the 2019 season.

Malden senior Garrett Rackley liked what he saw when he went for a visit at Westminster College in Fulton, Missouri.

“They had nice facilities,” he said. “The campus felt nice. I liked the campus and loved their football field. I also liked the message I received from their coaches. It just felt like the right fit for me.”

“I am so proud of the player Garrett has become,” Malden football coach Justin Peden said. “He’s always had the potential to be a good player, but he needed direction. When he finally decided to play to his full potential he did a lot of great things on the field for us and was one of the best guys I have ever been around in the locker room.”

Rackley first drew interest in signing with Westminster after the coaching staff visited his high school a few months ago.

“I’ve always been a lineman,” Rackley said. “I definitely like defense better because I like to put my head down and just run.”

Peden believes the lineman is most suited to play defense at the college level.

“He was all-district, second-team all-conference, and second-team all-region as a defensive lineman his senior season,” Peden said. “So I think he will likely play defense in college.”

Football has been a part of Rackley’s life for close to a decade.

“My dad and grandpa were both first-team all-state players,” Rackley said. “So I grew up in a football family and started playing football in the third grade at Dexter.”

Rackley’s most memorable high school football moment was attempting to rush the ball for a two-point conversion against Dexter his senior season.

“When you are an offensive or defensive lineman you always want a chance to get the ball,” he said. “Coach Peden told me at the beginning of the year, ‘If you work hard this year and give it everything you have I’ll give you that chance.’ And I got that chance against Dexter and it was awesome.”

“Shay is my best friend,” Rackley said. “I’m extremely grateful to have him going with me. It’s nice to have the comfort you are bringing something from home with you.”

Peden said what he will remember most about Rackley is the time he put in to become a better player.

“He was there every day in practice and would stay late wanting to work,” Peden said. “What I remember about him is the time he put in after people weren’t watching. His desire to get better really impressed me.”

Rackley plans on majoring in biology with hopes of becoming a conservation agent after college.

“I’d like to thank the Westminster assistant coach, Broc Silvers, who recruited me, my parents, and Coach Peden for helping me get this opportunity,” he said.