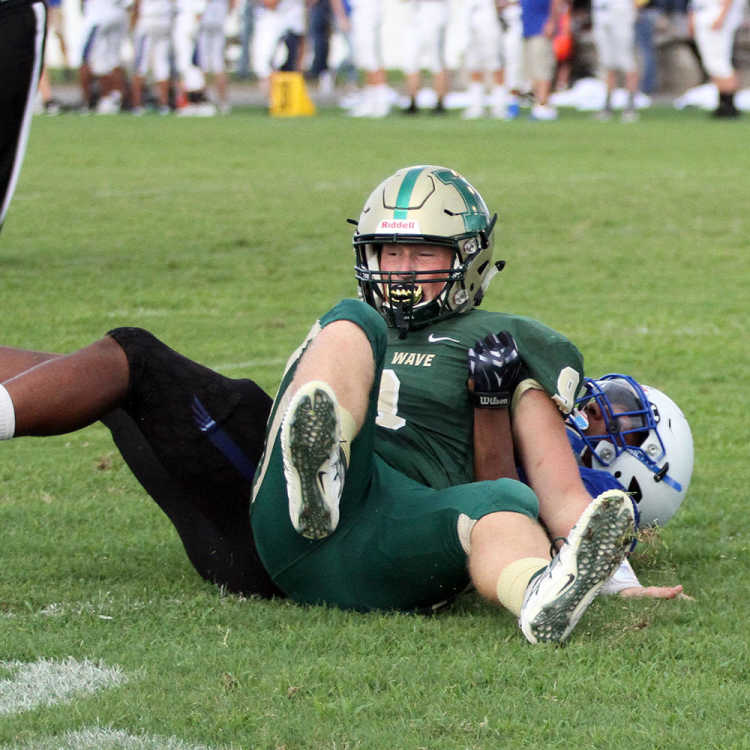 Photo by Kyle Smith, staff
Malden senior Shay Amoss makes a catch in the 2020 season at Malden.
Order this photo

Westminster College football coach John Welty made a good first impression on Malden senior Shay Amoss when he visited him at his high school earlier this school year.

ōWhen he came and talked to me at the school he related to us like you were in his shoes,ö Amoss said. ōHe told me how things would work from his perspective. It made me feel like I really wanted to go there so I could be around him and people like him.ö

A few weeks later following a visit to the campus Amoss elected to sign to play football at the four-year school located in Fulton, Missouri.

ōTheir coaches came by our school and wanted to speak to him,ö Malden football coach Justin Peden said. ōWe directed them to Shay and they had a good conversation. Then he went up to visit and really fell in love with the campus. I think itÆs a good opportunity for him to get in there and play at the next level and I think he will be successful.ö

Amoss said the ongoing refurbishments to the Westminster football facility stood out to him when he visited the campus.

ōThey just got a brand new turf field last year,ö he said. ōThey are also currently building a brand new football stadium that should be completed soon and that sounds really cool.ö

Amoss received playing time as a linebacker, slot receiver, and quarterback at the high school level.

ōLinebacker is definitely my favorite position,ö Amoss said. ōBut IÆll play wherever. They told me you can come and play your position but if we have an opportunity to get you on the field somewhere else you may get on the field playing that position.

ōThey also mentioned me playing a little full back or tight end as well,ö he added.

Amoss completed 102 of 183 passes for 1,524 yards and had 53 carries for 588 yards his senior season at Malden. He was selected first-team all-conference.

ōHe wants to be successful and owns his mistakes,ö Peden said. ōWatching him progress as quarterback throughout the year was a really neat thing. Towards the end of the year he really understood what we were doing. I wish I had more time with him to develop him as a quarterback. He ended up throwing for more yards than anyone IÆve ever had as a quarterback. HeÆs a good player and IÆm happy for him heÆs going to get a chance to play college.ö

ōI was actually planning on going to play baseball for a club team out west really far away after high school,ö Amoss said. ōBut I was going to have to put myself out there to get that opportunity. Then someone came and talked to me and actually wanted me. That really peaked my interest. Plus I feel like baseball players are a dime a dozen but not many get the opportunity to play college football.ö

Amoss will be joined by Malden senior defensive lineman Garrett Rackley who has also signed to play football at Westminster.

ōThat was a big part of why I decided to go there,ö Amoss said. ōGarrett was my first friend when I moved to Malden. ItÆs really cool we get to continue a journey together.ö

Westminster College is a Division III school that competes in the Upper Midwest Athletic Conference in football.

Amoss said he plans on majoring in environmental science and obtaining work as a conservation agent following college.

ōI really like being outside and I am big on preserving the outdoors and national parks,ö he said.