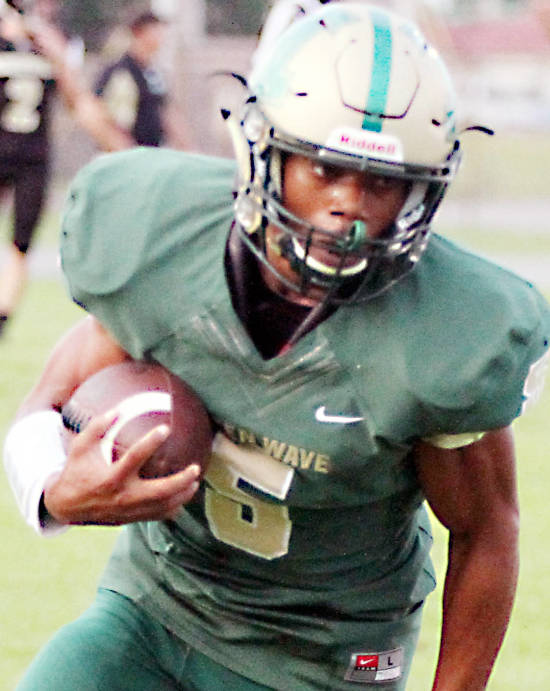 Photo by Dustin Ward, staff
Malden’s Du’Marques Jones rushes the ball in the 2019 Football Jamboree at Malden.
Order this photo

Malden Green Wave football coach Justin Peden has never been a fan of playing in a four-team conference.

“I prefer a bigger conference,” Peden said. “I think things get a little watered down in terms of postseason awards playing in a four-team conference. There have also been a few times over the years a team finished below .500 and won a conference. I feel like you should actually have to win some games to be a conference champion.”

The number of conference games Malden plays will double from three to six in 2020 due to conference realignment. Malden is slated to relocate to the seven-team SEMO Conference South and join Chaffee, Charleston, Hayti, Kelly, Portageville, and Scott City.

“I think it will be good for us,” Peden said. “We will see some new things and some new opponents.”

The Green Wave have dropped Caruthersville and New Madrid County Central from its schedule to make room for new conference foes Chaffee and Scott City.

“It’s tough losing New Madrid and Caruthersville because they are good competition for us,” Peden said. “I liked having both of those teams on our schedule. But Scott City and Chaffee will both be competitive also. I know Chaffee’s coach is excited about the future of his program and Scott City has had some success they will be trying to carry over. So we are looking forward to playing those teams.”

“We’ve got a tough opponent to open the season with for sure,” Peden said. “Kennett will be prepared. Coach Wyatt doesn’t let his kids take the field unless they are prepared and in shape. We will have a real challenge on our hands in Week 1. But I feel like if we are ever going to play Kennett Week 1 is the time to do it because everyone is going to be knocking the rust off. Hopefully, we will be able to get in there and compete with them. I’m looking forward to a real challenge the first week so we can see where we are at.”

With the sports world and face-to-face high school classes postponed this spring due to the COVID-19 pandemic the Green Wave have been unable to conduct weight training at the school.

“I’ve been trying to reach out to guys through the school’s Facebook Page and Hudl to keep them engaged and let them know we are thinking about them as coaches and we need to practice safety first,” Peden said. “When they let us start they let us start. Hopefully the kids have been responsible enough to take ownership of their conditioning during this time. It’s been a crazy deal but everyone is in the same boat so it’s not like we are at a disadvantage because every school is dealing with it. We just have to play the hand we are dealt and get after it when it’s time to get out there.”

Peden, like most football coaches, is hopeful things return to normal sooner than later this summer.

“If we can start meeting with the kids by June 1 we would have enough time to get everybody back in shape,” he said. “Most of our football players were in body conditioning at school. So right now they are losing the opportunity to participate in weightlifting during school. We will definitely be playing catchup but if they can do some stuff at home on their own and come in somewhat conditioned we will be able to get them where they need to be quicker.”