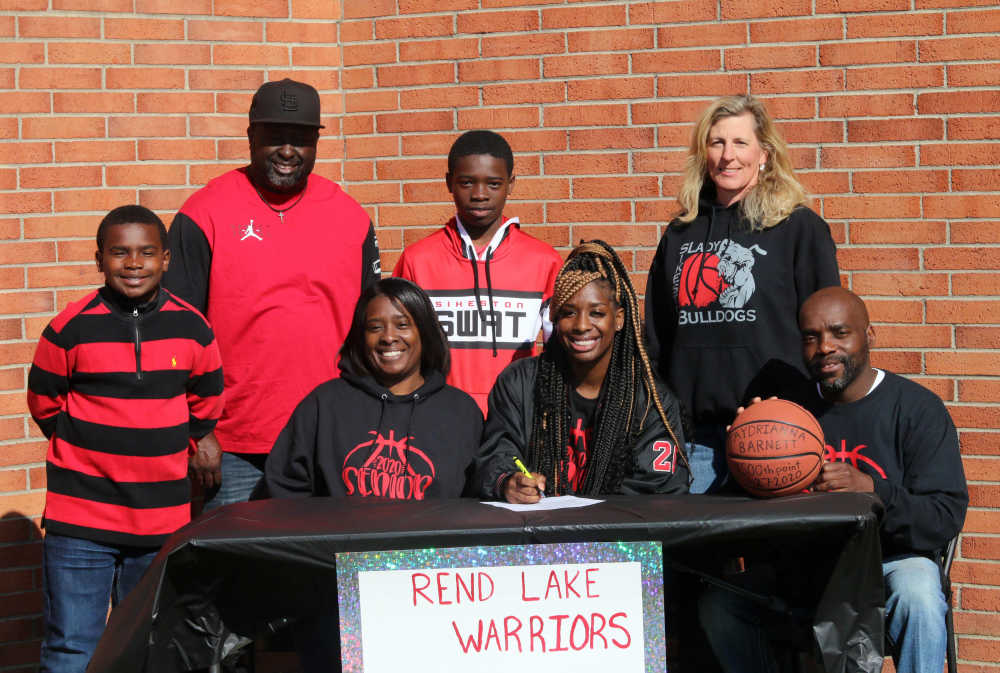 SIKESTON — Anyone who knows Sikeston senior Taydrianna Barnett understands that she is an attacker.

Whenever Barnett gets the opportunity, she will more than likely attack the rim as opposed to settling for a jump shot.

That is what intrigued Rend Lake head coach Dave Brown the most when the Lady Warriors reached out to Barnett and offered her a scholarship on the team. Barnett accepted and signed her National Letter of Intent on Tuesday, April 14, outside of the Sikeston Field House.

“He loves that I like to drive,” Barnett said. “Our team, we have a couple of 6-footers, but he mainly looks for point guards because they’re fast and have a fast pace.”

The style of play was one thing, but the other was the small-town vibe that the junior college in Ina, Illinois, offered Barnett as well.

“It’s very welcoming, and it reminds me of home because it’s not too big, it’s not too small, and everybody is so friendly,” Barnett said. “If I need help, they will be there to help me.”

From a coaches' perspective, Brown said that Barnett checked off every box on his checklist when he recruits players.

Being an almost “positionless” type of player is what Brown said that he’s looking for, and what he noticed immediately after watching Barnett for a limited time.

“We play an up-and-down system, predicated off of defensive pressure and being a good athlete,” Brown said. “Being able to shoot the ball and drive the ball, and she checked off every box when I saw her play. That’s the kind of kid we’re looking for; somebody’s that’s tough, who’s going to play defense, who can stretch the floor, and — in a sense — be positionless. I feel like that’s where the game’s going.”

Outside of being an excellent athlete, Brown is also looking for exceptional people.

Currently ranked as the No. 1 academic junior college in the country, according to Brown, he said that he wants to uphold the high standards in the classroom as well.

So, when watching her play, he wasn’t just watching the way she played, but the way she reacted, along with getting feedback from coaches that are close to her.

“I talked to both of her AAU coaches a lot,” Brown said. “I saw every highlight film there is on her. I probably watched five games, so it’s hard to pinpoint just one, but I do my homework, and she’s the style of kid and her personality too. Her (Barnett) and her mom are good people, and we want more than just good ballplayers. Rend Lake is the No. 1 academic JUCO in the nation, and we like good kids where we’re at.”