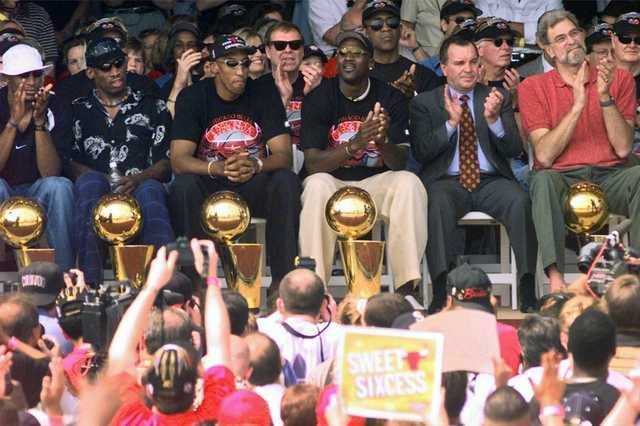 Members of the 1998 Chicago Bulls (from left) Ron Harper, Dennis Rodman, Scottie Pippen, Michael Jordan, and coach Phil Jackson are joined on stage by Chicago Mayor Richard Daley, second from right, during a city-wide rally in Chicago to celebrate the Chicago Bulls sixth NBA championship. That season is the subject of the documentary "The Last Dance," which will air beginning Sunday.
Associated Press file

He is on a first-name basis with some of the biggest names in the sport, so you wouldn’t think he is like most of us, who remain “fans” of professional athletes and our favorite sports teams from childhood well into our adulthood.

Your assumption is incorrect.

“The Bulls were our team,” Korn said.

As it turns out, Korn is exactly like every one of us, a sports fan at his core. Even now.

When the synthesizer begins metering out the epic theme song of the Chicago Bulls, composed by the Allen Parsons Project, butterflies still begin to flutter in Korn’s gut and his adrenaline still flows through his veins. It did 25 years ago when he was a scrawny teenager running down the street of his Plano, Illinois neighborhood to teammate and friend, Kyle Klatt’s house, and it still does today.

Korn’s team, from Korn’s youth, the Chicago Bulls from the 1990s, will be the subject of a much-anticipated documentary “The Last Dance,” which airs on ESPN over the next five Sunday evenings at 8 p.m. and 9 p.m. And just like sports fans all over the country, Korn can’t wait to watch it.

The documentary will give fans an all-access look at the 1997-98 season, in which the Bulls won the final of their six NBA championships during the decade.

“You have to give me these two hours,” Korn continued. “I’m literally going to lock myself in a room and just watch. I don’t want to miss anything.” 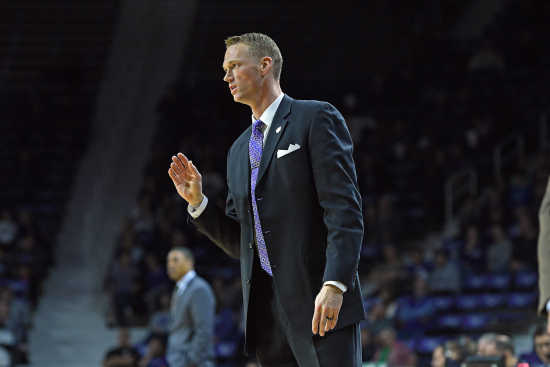 Korn grew up less than an hour from the United Center under the guidance of two parents who were “sports junkies,” according to Korn.

A winter evening in Plano consisted of trudging home through the endless snowfalls, tired from that night’s basketball practice, and eating dinner before turning on the TV to watch the Bulls play on the Chicago-based network WGN.

The Korn family’s world stopped turning 82 times a year (more with the lengthy playoff runs that accompanied the Bulls’ success).

“We were centered around the TV,” Korn said. “You sat through the commercials. And you sat there from 7 to 9 p.m. And you watched the game.”

The entire world (not an ounce of hyperbole with that assessment) was mesmerized by the athletic feats of Bulls’ legend Michael Jordan. And certainly, Korn was, as well. However, it was Jordan’s sidekick, Scottie Pippen, who resonated with Korn.

When Korn was a 15-year-old freshman at Plano High School, he was a 5-foot-10 guard who only dreamed of playing for the Reapers’ (yes, that is the mascot) varsity squad. He was like any other kid strolling down the school hallways en route to his fourth period Algebra class. However, the summer following his freshman year, Korn shot up to 6-foot-6 and suddenly, his athletic future was altered forever.

“He was a new age player before we had new-age players,” Korn said. “Obviously, Jordan was the guy, but Scottie for me was very influential. I loved watching him play. His versatility and the way that he played, he looked like me at the time, because I was gangly and all over the place.”

Plano’s basketball team finished third in the 1999 IHSA Class State Finals and a then 6-foot-9 Korn was the leading scorer in the tournament with 103 points over four games. How did the senior forward perform so well?

“I got a pair of Jordan’s for my senior year in high school,” Korn recalled. “I wore them in the state tournament. Our colors were purple and white, and I was wearing these white and red Jordan’s.”

Nike unveiled the Air Jordan brand in 1984 and it is the highest-grossing shoe line in the history of athletic footwear. The Jordan brand brought in over $1 billion (that is with a “B”) in the third QUARTER of 2019 (35 years after its unveiling).

Korn was like every other kid around the globe who purchased a pair of “Jordan’s,” he had complete faith in those shoes.

“Even in high school,” Korn said, “I still felt like a little kid. You think you can run faster and jump higher in those shoes. I always felt like if I had those Jordan’s, there was nothing that could stop me. I grew up idolizing that team.”

The Last Dance will air on ESPN, but Netflix will air the previous night’s episodes beginning each Monday morning.