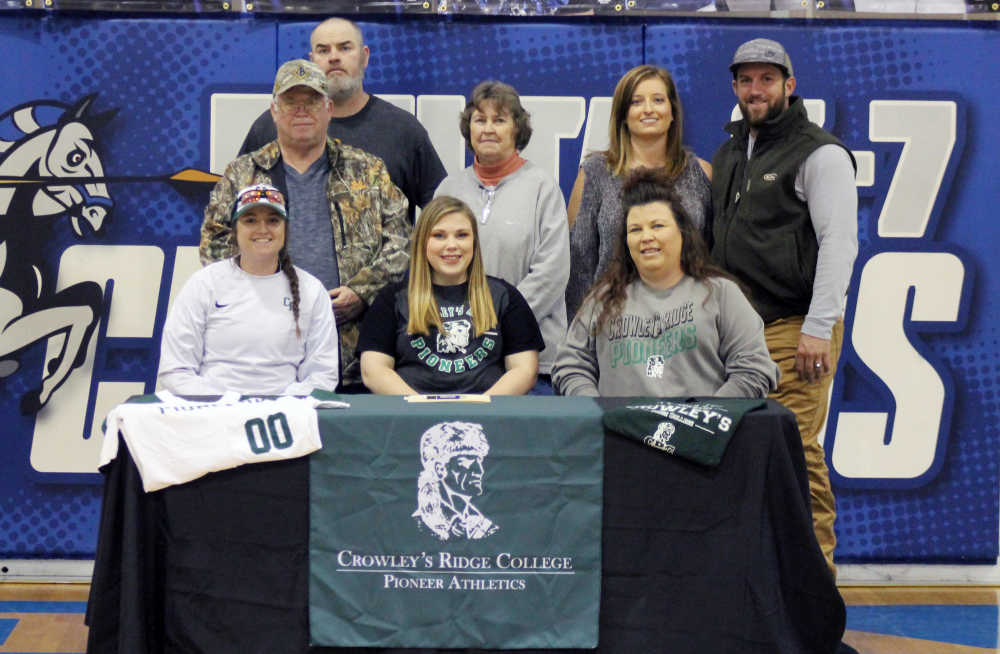 Delta C-7 senior Kagan Teal has been playing softball since she could pick up a bat.

“I’m involved in many sports but softball has always been my favorite sport,” Kagan said. “I’ve been playing since I was two. It was always one of those things that just clicked, and I was good at it. Apart from always battling the weather, being on the field is like a safe space away from all of the stress of school and life itself. It’s somewhere to just let go and do what you love to do. It has always been a part of my life and I don’t ever want to stop playing softball.”

Even when softball wasn’t an option Kagan found a way to stay on a diamond. Kagan was the starting catcher on the baseball team during seventh and eighth grade because Delta C-7 did not offer softball at the junior high level.

“In junior high she played baseball with the boys,” Delta C-7 softball coach Bobbie Teal said. “She was their catcher for two years. She has also played volleyball and been a cheerleader for the last six years in junior high and high school.”

“I was attracted to Crowley’s Ridge College because of its smaller-sized campus,” she said. “We’ve only heard good things about the college. The coach was super nice when we met at tryouts. I felt welcomed by the team and the college.”

Kagan has played several positions at Delta C-7. She is expected to be a corner infielder or a catcher at the collegiate level.

“She was the starting catcher her freshman and sophomore seasons,” coach Teal said. “Then her junior season she caught, played shortstop, and pitched. The pitching was out of necessity to help our team’s pitching depth.”

Kagan said her most memorable high school softball moment took place when she suffered an injury in practice her sophomore season.

“I was trying to help one of the new girls bat and I made the bad decision of squatting down behind her and she swung and hit me on the left side of my head near by temple,” she said. “I ended up having a mild concussion and a knot on my head. That is an experience I will definitely never forget.”

Kagan was ready to make more memories on the diamond this spring. Delta C-7 had nine players out for high school softball — the minimum number required to field a team. But spring practices were halted in mid-March due to the COVID-19 pandemic.

“It’s been an awful spring,” coach Teal said. “We got a few practices in before things were halted. I think this has devastated a lot of athletes in our area, especially the seniors. It was going to be some of the seniors last opportunity to compete because not everyone is going to play at the college level. It’s just heartbreaking for everyone involved.”

Kagan also plans on being a cheerleader at Crowley’s Ridge College.

She plans on pursuing a career in physical therapy after college.

“I want to be able to help people heal from their injuries so they can feel better and get back to their normal lives,” she said.

Kagan appreciates the time her mother has devoted to make it possible for her to play softball over the years.

“I would like to thank my mom for spending all of her time with me,” she said. “We spent so much time in the car together going to games and tournaments. It was always such a good time to talk and catchup on everything that is missed during a busy week. If it wasn’t for her making sacrifices so I could do what I love I don’t think I’d be as far as I am now.”