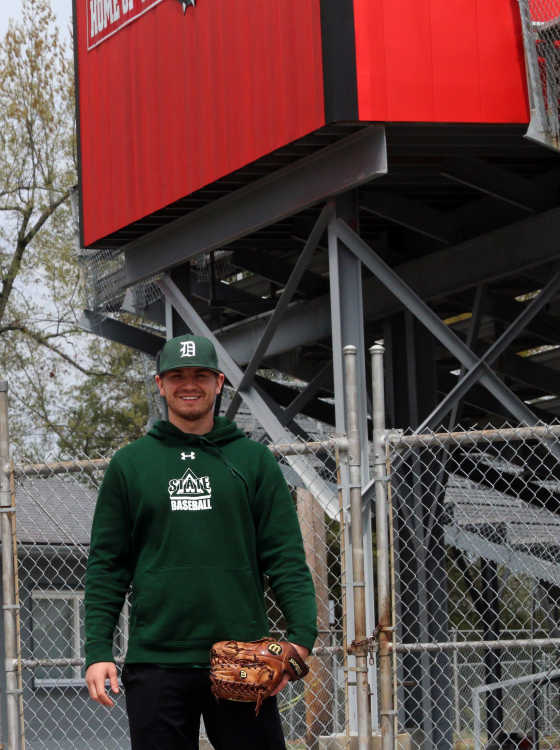 SIKESTON — It was never in former Sikeston Bulldog Blake Wolferding’s mind that his season would come to an end so abruptly.

Entering his first season with Delta State, Wolferding appeared in 18 of the team’s 23 games — starting in each one.

When the news broke that the season was ending, due to the coronavirus pandemic, it got real for Wolferding, his teammates, and his coaching staff.

“Honestly, the day we found out that our season was on hold, we were in the middle of practice, and we were getting ready to leave for Alabama that evening,” Wolferding said. “He told us that he didn’t think it would be very long, and we figured a few weeks, and we were planning on getting right back to work. It wasn’t like our coach said, ‘This is goodbye’ or anything like that. It was, ‘Stay focused. Don’t let this get to you and keep your minds set on your goals.’ That was ultimately a World Series.

“Things have changed in the last few weeks, and so here we are.”

However, Wolferding isn’t using this time for leisure, saying that he’s still working as he would normally.

“Routine-wise, nothing much has changed when it comes to everyday things, except for being with the team,” Wolferding said. “When you’re with the team, you’re able to get a lot more done. Learn a lot more, but as in my routine alone, nothing’s changed. I’m still lifting four days a week. I’m still getting my reps in, taking care of my body. It feels weird, and it still feels like a dream.

“We were in the middle of the season, and we just played the day before and were getting ready to leave for our next game. We get a call about the season getting canceled, so it almost feels like I’m back in the offseason.”

Wolferding isn’t the only ex-Bulldog and Rend Lake Warrior to take their talents to Cleveland, Miss., as Wyatt Pratt joined him on the Statesmen roster.

Playing with someone you’re already familiar with is a plus, and Wolferding added that playing at a successful university, such as Delta State, gives a player even more accountability. The Statesmen have won over 40 games in each of the last four seasons, and have one national championship, in 2004.

“The best part about playing with somebody you know is when you have those 0-for-4 days and those days when you go home, and you’re like, ‘Man, that’s not who I am,’ and you’re wondering what did I do wrong,” Wolferding said. “Well, you got that guy that’s been there with you your whole life, and he’s seen you at your best and your worst. It’s good to have somebody to talk to about that. At a college level, it’s not like high school; you’re not guaranteed opportunities. You got to earn those.

“When you’re struggling, it’s good to have somebody there that you know and seen you at your best.”

For three years playing at Sikeston, Wolferding hit .337, with 61 RBIs, and 24 runs scored.

He was batting .288, with 11 RBIs, and 14 runs scored at Delta State before the cancelation.

“Going from high school to Rend Lake, the game plays a little bit faster,” Wolferding said. “You have to put a lot of accountability on yourself. You’re only there two years, and if you don’t want to be there, then you’re not going to play, and you’re not going to move on. You have to have a lot of self-accountability to put in the work, and it takes a very good mindset. I learned that the game did speed up a little bit, but it didn’t take me long to adjust.

“Then, from Rend Lake to Delta State, the competition got a lot better. You’re surrounded by guys, and anybody on our team could have been a game-changer at some point in time. As far as Delta State goes, I loved the experience, and it was good being around guys. It was good being on a winning program, and the expectations there are to win and go deep into the playoffs every single year, so that’s what I’m most excited about.”

Success is always on Wolferding’s mind, as well.

Even though baseball may not be in the future, he is always planning for what’s ahead.

“It’s always been a goal of mine,” said Wolferding on playing professional baseball. “Now, I don’t focus too much on that. I don’t focus too much on the big picture. If something was to happen, then it happens, but I also want to set myself up outside of baseball. I’ve been trying to do a lot more off-the-field stuff since I got to Delta when I realized why it’s important to be a good person off-the-field.

“My plan was to be successful at baseball and do all I can with it. Then, when I’m done with that, I want to move onto the next thing, and I want to be successful in that. Then, after that, I’d like to branch out to something else. I don’t set limits.”