Timing is everything: SEMO's Rekha Patterson finds herself in a challenging spot 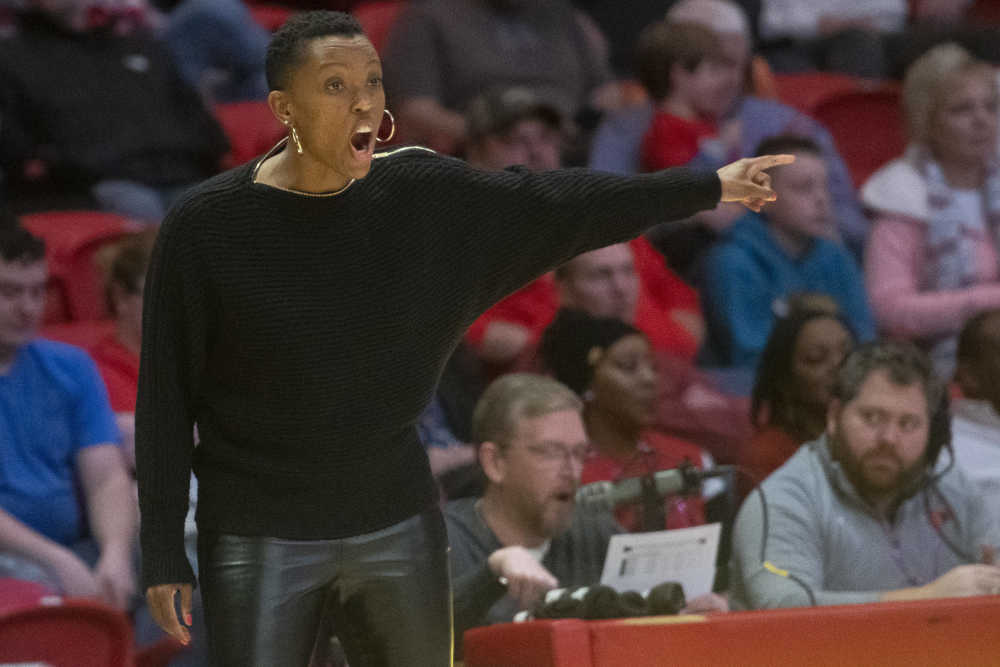 Southeast Missouri State women's basketball coach Rekha Patterson shouts instructions to her team during a game this past season against Southern Illinois University Edwardsville at the Show Me Center.
Jacob Wiegand ~ Southeast Missourian
Order this photo

Like ripples in a pond following a stone being tossed in, the repercussions of a collegiate coach bartering for more financial security in wake of a successful season are inevitable. And in some regards, Southeast Missouri State women’s basketball coach Rekha Patterson has never found herself in a more advantageous position.

The Redhawks enjoyed their most successful season in Patterson’s five years in Cape Girardeau, as her team won 25 games (the most in program history at the NCAA Division I level) and rolled through the Ohio Valley Conference Tournament (at least in the final two games) en route to claiming the Redhawks’ second NCAA Tournament berth ever.

For that success, Patterson was named the 2019-20 OVC Coach of the Year.

“It means a ton as a department, as a university, and as a community,” Southeast Missouri State athletic director Brady Barke said last month of the program’s success. “Not just at the time we’re also struggling on the men’s side, to have such a bright spot that we’re seeing on the women’s side, but just the way that she represents us in the community is second to none.”

In short, everyone likes coach Patterson. And if you don’t, go work that angst out with your therapist.

However, in some ways, Patterson’s timing as it relates to reworking her contract, which has two seasons remaining, isn’t catastrophically poor.

The coronavirus has wreaked havoc on the global society in infinite ways, including the finances of intercollegiate athletics.

Southeast’s opportunity to participate in the NCAA Tournament was cut-off by the pandemic, and from an accounting perspective, the financial benefits will be limited as compared to an ordinary year.

The New York Times reported that the annual payout from the men’s NCAA Tournament to the 32 conferences had been budgeted for $600 million, but that had been slashed to $225 million. In addition, that money won’t be distributed until June, as opposed to April.

As if that wasn’t a big enough punch to the gut, Barke and every other NCAA athletic director took an uppercut following that decision when the NCAA ruled that the senior class of 2020 athletes in spring sports could return for an additional season of eligibility in 2021 after their season was derailed by the virus.

That sounds great from a talent on the field standpoint but trying to pay for five classes of scholarship athletes is going to be challenging for an institution such as Southeast.

“I think she has grown as both a person and a coach during her time here,” Barke said. “It’s been really exciting to watch.”

Now may not be the time

The coronavirus situation has slowed the annual coaching change industry like it hasn’t seen in decades.

This spring there have been just 21 women’s NCAA Division I head coaching positions open, while on the men’s side, there has not been a single coaching change made among the ‘Power Six’ leagues.

Despite that, Barke understands how other programs will view Patterson in the future.

“I’d love to keep her here as long as we can,” Barke said. “If people aren’t interested in her, then they are foolish. She has a bright, bright future.”

Barke isn’t obligated to do anything regarding Patterson’s deal at this time, and if she chose to leave for another head coaching position today, it would cost over $100,000 to buy her services out. However, there are coaches within the OVC that make significantly more than Patterson ($110,000 annually), so at some point, that must resonate with her.

SIUE’s Paula Buscher ($136,000) is also better compensated than Patterson at this point.

“She is an up-and-comer in the women’s basketball coaching ranks,” Barke said. “Her personality and ability to connect is something that you don’t see out of everybody.”

Barke acknowledges that there may be a situation in which Southeast just has to accept financial reality in terms of retaining Patterson, but by speaking with her (and signing an extension) at this point, it can act as a deterrent for the coach to leave simply for more financial security.

“Like with all great head coaches,” Barke said, “at some point, there comes a time where we’ve done what we can do, and we just have to wish them luck on the next big step for them. Hopefully, that isn’t anytime soon. But she and I will certainly address those things.”