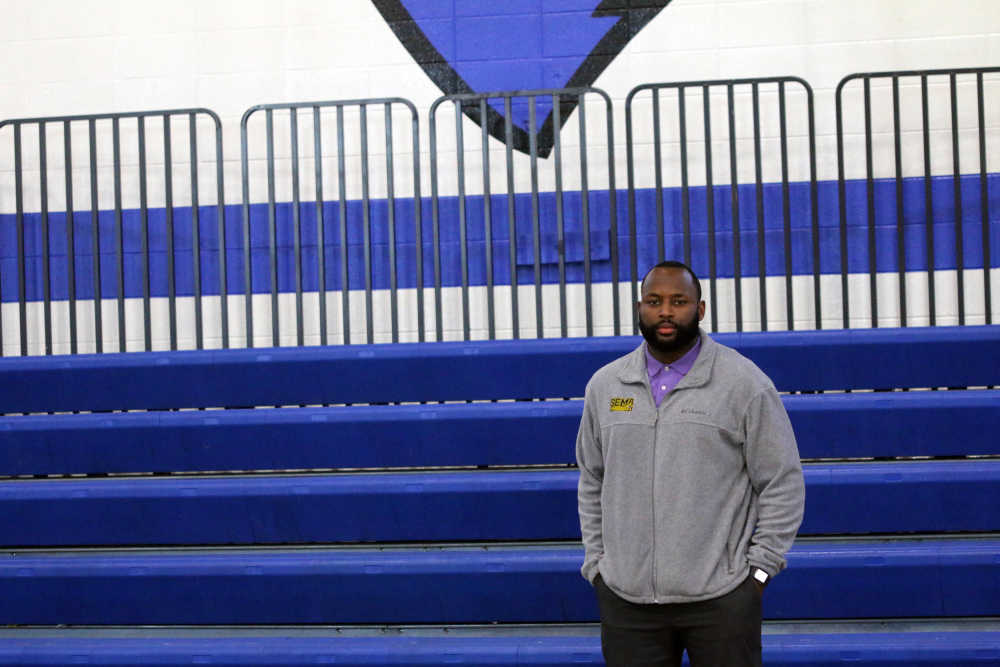 Former Bluejay player and assistant coach Jamarcus Williams will take over for the storied Missouri program, after being officially announced at a meeting on Thursday evening.

It is Williams’ first go-around as varsity head coach, and he is looking forward to what is in store.

“It means a lot that the people from the community that I grew up in have faith in me to continue the success of our program,” Williams said. “I’m extremely grateful for it. I’m just overwhelmed with joy, and to have this opportunity to be able to give back to these kids means the world to me.

“All of my coaches — I’ve learned a great ton from all of them. And, now that I have the opportunity to do the same is just surreal.”

As a player, Williams helped lead the Bluejays to four-straight Show-Me Showdown appearances. He won one state championship (2007), had two second-place finishes (2005, 2006), and one third-place finish (2004).

The goal now for Williams is to bring a 12th state championship back to Charleston, but he doesn’t want to rely on just winning.

“That’s always the goal,” said Williams of what bringing a state championship back to Charleston means to him and the community. “Ultimately, I have the same goal as Coach Farmer, and it’s to teach these young men life. Coach life lessons. When they walk out of here, after being in my program for four years, hopefully, they come back at a later point and say, ‘I appreciate you, coach. Thank you.’ That’s the ultimate goal, and I want to bring many more plaques into the gym, but that’s secondary.”

After his playing career, Williams wound up back on the sidelines for the Bluejays, where he’s been an assistant coach for the last seven years.

Since arriving before the 2013-2014 season, Charleston has a 157-60 record, and Williams has learned a lot from a legendary coach in the process.

“We’ve talked about this several times, and the conversations didn’t start this year,” Williams said. “They started from the first year; he would give me tips on ‘Whenever you take over, you always got to pay attention to this. It’s not always about wins and losses. It’s not always about Xs and Os.’ I’ve been receiving tips from Coach Farmer for seven years now. I can’t say this year or last year, it’s been a learning process, coaching-wise, for seven years.”

As a former player, Williams said that the teams he will be working with are the ones that have come up through the junior high ranks, through junior varsity — which Williams coached at Charleston previously — and then progress enough to play at a high-level for the varsity team.

“You get an idea of what type of player they’re going to be from an early stage,” Williams said. “I’m not in here to create robots. I’m here to help players capitalize on their strengths, and then you minimize the weaknesses. If I see a player who was crafty at getting to the bucket and finishing, then I need to help him and further develop his game to where he is better at that.

“That may include developing a pull-up jump shot so the hesitation dribble can be more effective. So, as far as developing players, I will help players capitalize on strengths and minimize weaknesses.”

A basketball player’s progression typically would start in the summer.

However, with gyms being less limited due to the coronavirus pandemic, Williams said that he couldn’t have his players enter the gym, leaving a void on plans set for the offseason.

“This is a lifestyle. These players that win championships, they live it. It’s not seasonal. I also told my young guys, my JV group, from this past season, I told them, ‘If you all want to continue success, then you will be in the gym all summer long. No ifs, ands, or buts about it. No excuses.’ Hopefully, this COVID-19 passes pretty soon, and we can get back to doing what we normally do.”