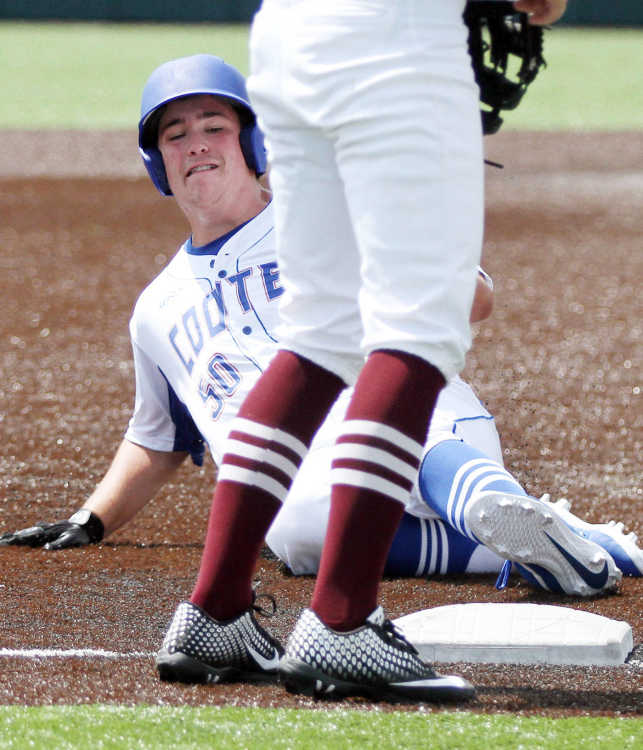 Cooter senior Hayes Austin elected to change his approach at the plate entering his senior season.

“Last summer I started focussing on spreading the ball out a little bit more and hitting for average,” Austin said. “Then things really started coming alive for me at the plate in the fall.”

The right-handed slugger went from hitting .276 last spring to .413 in the fall of 2019. After a successful fall campaign, Austin attended a baseball showcase where he caught the attention of the Three Rivers College coaching staff.

“He went to a showcase and Three Rivers fell in love with him,” Cooter coach David Mathis said. “They decided to offer him a spot earlier this week. He’s a really high academic kid also, so I think it should be a good fit for him.”

Austin committed to play baseball at the two-year school in Poplar Bluff Wednesday.

“I knew I wanted to go to a two-year school,” he said. “I also wanted to go somewhere that took their baseball program seriously. Three Rivers has a good reputation of doing that and I thought it was a good opportunity that I didn’t want to turn down.”

The first baseman has become as notorious for his defense as he has for his power at the plate.

“I think he’s one of the best first baseman we’ve ever had if not the best to come through our program,” Mathis said. “And we’ve had some good ones over the years including a couple all-state guys in Johnathan Boone and Chase Evans. Honestly, I think Hayes would have been an all-state guy this spring.”

Austin said he transitioned to playing first base after he suffered a shoulder injury when he was playing Little League baseball.

“I used to pitch and play third base,” he said. “But in Little League I separated the growth plate in my shoulder. That is the main reason I ended up at first base. I took playing the position seriously when I switched and ended up sticking with it.”

Austin has been the starting first baseman at Cooter since he was a sophomore.

“Everyone wants to be the best they can at any position,” he said. “But a lot of people take first base for granted and don’t really understand everything that goes into it fundamentally. I watched You Tube videos constantly of how to play the position. I’ve always wanted my infielders to be able to trust me when they throw it to me.”

Mathis feels Austin, who batted cleanup for Cooter, is a threat to compile a double digit home run total in a collegiate season.

“He’s transformed his body and looks like a monster right now,” Mathis said. “He can hit it plus he plays great defense at first base. There is no telling how much better he may get because he’s just now coming into his own. He could end up being a D-1 type player because of his size and his defensive abilities at first base. If he hits it the sky is the limit for him.”

“I hit a walkoff grand slam against South Pemiscot,” he said. “It was the first home run I hit in high school.”

Mathis regrets he didn’t get the opportunity to watch the slugger go deep again this spring due to the fact the season was cancelled due to the COVID-19 pandemic.

“I was looking forward to seeing what he could do,” he said. “He’s got so much power. Plus his power is to the opposite field and most kids just don’t have that.”

Austin hopes baseball returns at some point this summer so he can play summer baseball for Paragould Senior Legion.

“As of right now Arkansas Legion has not cancelled its regular season,” he said. “Hopefully, we will get to play at least part of our season.”

“There are definitely a lot of people from around this area on their squad,” Austin said. “It will be good to have some stuff in common with some teammates and good memories to talk about.”

Austin plans on pursuing a degree related to sports medicine in college.

“I like knowing how to take care of the body and it’s something I’ve never learned that much about so I think it would be interesting,” he said.

Austin said playing at the collegiate level wouldn’t have been possible without the help of his high school coach.

“I have to thank Coach Mathis,” he said. “He always pushed me and even when I didn’t agree with it at times he always knew what was best for me. He saw my potential when I didn’t and trusted me in the big moments.”