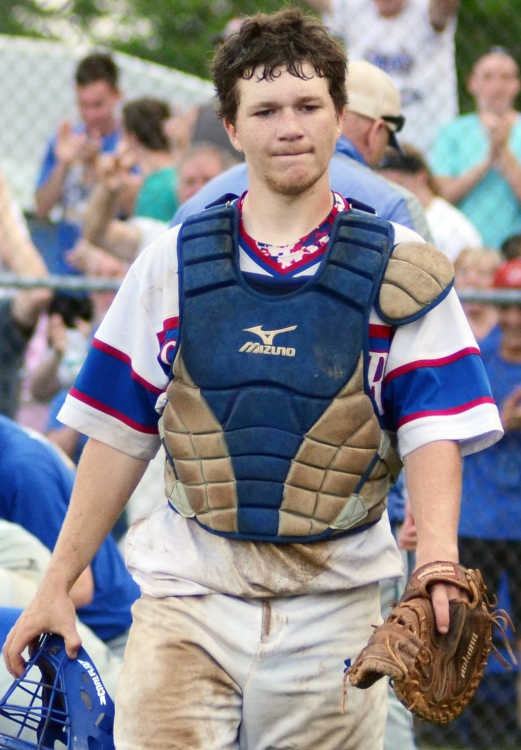 Cooter senior Lane McLevain didn’t want to rule out the possibility of being a two-way player when he signed to play college baseball.

Neither did College of the Ozarks.

“College of the Ozarks mentioned using me as a two-way player,” McLevain said. “They said I might come in and pitch, play in the outfield, or possibly catch. They said I could end up playing anywhere.”

The opportunity to play anywhere was music to McLevain’s ears. McLevain made the decision to sign to play baseball at College of the Ozarks near Springfield, Missouri, after considering several offers.

“Their coach really reached out to me,” McLevain said. “It just seemed like that was a better fit for me than the other colleges I talked with.”

McLevain put up impressive numbers in Cooter’s fall season. The right-hander went 6-0 on the hill with a 0.56 ERA in 37.2 innings pitched.

“He had a great fall for us and a great spring for us last year,” Cooter coach David Mathis said. “I think he is 13 or 14-1 in his last 15 starts. His only loss was to Valle Catholic and we made a couple errors behind him in that game. He also won the third-place game for us at the state tournament last spring.”

McLevain also enjoyed success at the plate in the fall as he hit .475 with 21 RBIs.

“He doesn’t strikeout much,” Mathis said. “He’s going to put the ball in play.”

The success led to McLevain being named Tri-County Conference Player of the Year in the fall of 2019 as Cooter plays its conference schedule in the fall.

“He’s one of the hardest working kids I’ve ever seen,” Mathis said of McLevain, who was also named first-team all-state as a catcher last spring. “When he goes on vacation I have to call coaches so he can throw and hit on their fields while he’s gone. He never takes a day off.”

Cooter has enjoyed team success also during McLevain’s career. Cooter placed third in Missouri in Class 1 last spring. The success continued for Cooter in its fall campaign earlier this school year as it went 22-1 and won the Tri-County Conference Tournament for a seventh straight season.

“It was fun getting to play with all the new guys in the fall,” McLevain said. “We had a really good incoming freshman class. I think we would have had a good shot to make it back to state this spring, especially if those younger guys came through for us. I think we probably put together our best fall record since I’ve been in high school. This spring would have been a great test for the younger guys and a great chance for them to get used to high school baseball because we were going to play some really good competition.”

McLevain said he plans on playing for the Charleston Fighting Squirrels this summer after he was unable to compete on a diamond this spring after high school baseball season was cancelled due the COVID-19 pandemic.

“It’s been really boring lately,” he said. “I’ve still been hitting and throwing at home. But that’s not enough. I’m ready to get out there and play.”

“It was a great experience,” he said. “Coach Minner knows so much about baseball. I learned something every game I played for him. It was also fun to step into the batter’s box and know you were going to face a good pitcher every at-bat.”

McLevain, who says his favorite position is catcher, has spent time in the outfield, at second base, and behind the plate when he was not pitching at the high school level.

Mathis feels McLevain is best suited to be a catcher at the collegiate level but may also see time on the hill.

“He’s a really good defensive catcher that throws it well from behind the plate,” Mathis said. “He also handles the pitchers well.

“His arm has gotten a lot stronger over the last year,” Mathis added. “I think he had a little more velocity when we started practice in March. He may get a chance to throw some in college just because he throws three pitches. But they really liked him behind the plate.”

College of the Ozarks is a fully accredited four-year Christian liberal arts college. It is an NAIA school that competes in the Association of Independent Institutions in baseball. Its head baseball coach is Neale Richardson.

McLevain says he hopes to become a pharmacist after college.

“I’d like to thank my parents, coaches, and friends for helping be get to this point,” he said.