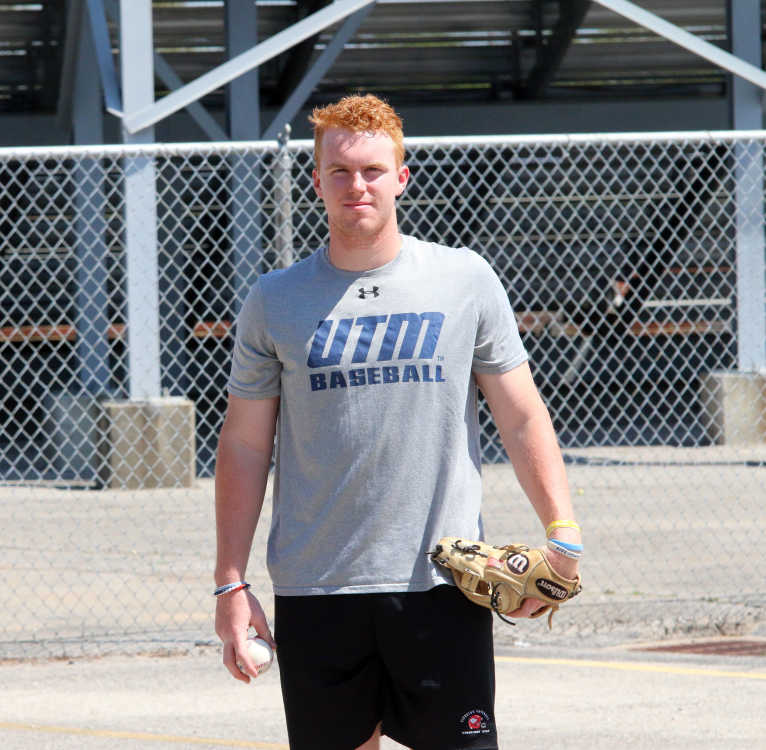 Former Sikeston Bulldog Nate Self poses for a picture in front of VFW Stadium in Sikeston on Monday, April 6, 2020. Self's freshman season at the University of Tennessee-Martin ended due to the coronavirus pandemic.
Alex Wallner/Standard Democrat

SIKESTON — Former Sikeston baseball standout Nate Self didn’t have quite the freshman season he envisioned at the University of Tennessee-Martin.

Due to the coronavirus pandemic, all Division I schools were forced to end their spring seasons. The Skyhawks played 16 games and had a three-game series at Belmont scheduled when the news occurred.

“It was hard, especially with the seniors that we had,” Self said. “We had a good group of seniors. I think everyone was just in shock. That was the longest day of my entire life. I’ll never forget it. We had weights at 6 in the morning, and our classes got canceled.

“We had to wait until 5:30 at night when we were brought to the locker room. The main thing he (UT Martin head baseball coach Ryan Jenkins) said was that you’d become just a student now, and if you have to make sure you get your grades right, but continue to stay in shape and don’t lose the passion.”

Using his time wisely, Self is still working out and staying prepared for whatever lies ahead.

Self appeared in seven games and started five for the Skyhawks this season. UT Martin had a 5-11 record before the season was canceled and lost at Central Arkansas in what was, their final game of the season.

“Staying in shape as much as I can,” Self said. “Lifting every day, at the cage every day. I’m throwing when I can. We don’t know. We don’t even know about summer ball yet. It’s not 100 percent confirmed on if we’re playing or not. So, mentally, I’m telling myself I am going to play in the summer because if we get there and I’m not mentally prepared, I’m not going to do well. We don’t know.”

Having a standard routine is something that Self has as a collegiate athlete.

However, with the recent outbreak, that has taken a backseat.

“It throws everything off,” Self said. “I don’t think I’ve ever been in an April where there’s no baseball since I was six. So, it’s odd to wake up and not have a practice or a game to go to. It makes you search for a different identity. A lot of people that play baseball in the spring, that’s all they do, especially at the college level. So, you have to search for other things to be apart of. It’s odd for sure.”

Despite not ending his first season of college baseball on his terms, Self still enjoyed the time he had.

“It was awesome,” Self said. “I didn’t play well, and we were battling it out for the starting spot. I didn’t probably live up to the expectations that I had for myself, but I almost have a do-over. Not that I wanted one. I wanted to continue to battle and stuff, but I have a do-over, so I’m going to prepare mentally and physically to have a better one next year.”

Recently, the NCAA decided to allow spring-sport athletes to receive an extra year of eligibility after their respective seasons were cut short.

UT Martin has seven seniors on the roster — all of which are either pitchers or outfielders.

“Everyone got an extra year of eligibility, so we’re going to come back and act like the season never happened,” Self said. “We don’t know about some seniors, but I’ll be a freshman again.”