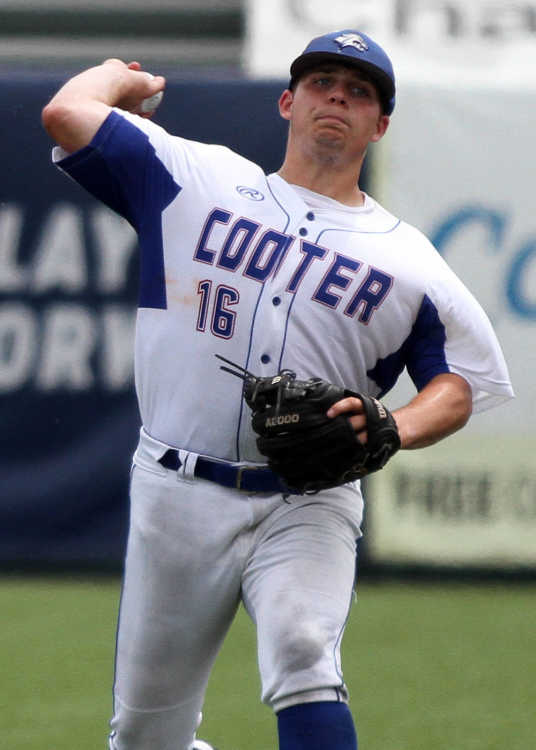 Cooter senior Jacob Watkins had College of the Ozarks on his radar before he ever stepped onto a high school baseball diamond.

“Before baseball was ever a factor College of the Ozarks was one of the schools I was highly interested in attending because of their work-education program,” Watkins said. “It allows you to graduate debt-free and gain experience you can utilize after college. My family really pushed me to take advantage of that so I went for an interview. Then their baseball coach called me one day and invited me to tryout.”

Watkins attended the tryout in the fall and made the decision to sign to play baseball at College of the Ozarks before Christmas.

“I went to the tryout and a couple of weeks later they asked if I wanted to play for them,” Watkins said. “And I thought it was the right fit for me.”

Watkins was selected to the Class 1 all-state baseball time his sophomore and junior seasons. He was also named Tri-County Conference Boys Basketball Player of the Year last month.

“He’s probably our most decorated player,” Cooter coach David Mathis said. “He’s a two-year all-stater and I think he would have received that honor again this spring. He had a really good fall and could have been Co-Player of the Year in the Tri-County Conference in baseball.”

“He only struck out six times in 93 plate appearances,” Mathis said. “That’s a ridiculous statistic.”

Watkins has played on the infield most of high school career.

“When he came in as a freshman we weren’t sure where to play him,” Mathis said. “I thought about putting him in the outfield but his dad wanted to put him at shortstop and just let him go. He’s played shortstop for us and also played third base for the Charleston Fighting Squirrels. He does a good job at both positions. I think he’s probably one of the best infielders in the state in Class 1, 2 or 3.”

Watkins also expects to be an infielder at the collegiate level.

“They see me as an infielder and like my handling at third base,” he said. “But they may move me around some. We’ll see.”

Watkins will be joined by Cooter teammate Lane McLevain who is also going to play baseball at College of the Ozarks next season.

“The fact he is coming is going to make it so much better,” Watkins said.

Watkins was part of a Cooter squad that placed third at the Class 1 state tournament last spring.

“I loved playing baseball with those guys last year,” Watkins said. “I had been around Christian Gunnels, Dawson Treat, and Zach Pendergrass since I was in the fourth grade. Those three guys and everyone else on the team have been great teammates over the years. Last year was probably the best year of baseball I’ve ever had.”

With five senior starters on its roster Cooter looked poised to make another deep playoff run this spring. Cooter went 22-1 in the fall, won the Tri-County Conference Tournament in the fall, and was ranked No. 2 in Class 1 in the preseason state baseball rankings. Cooter has yet to play a game this spring because spring sports have been suspended due to the COVID-19 pandemic.

“We had a great run last year and I was hoping we could make another one this year,” Watkins said. “But I don’t know what is going to happen now.”

Watkins continues to train at home incase he does have an opportunity to return to the Cooter baseball diamond before he graduates.

“You have to do everything at home right now,” Watkins said. “I wish we could go to the field. We can’t but you do what you can by yourself at home. I think I’m close to being game-ready but it’s hard to tell for sure.”

College of the Ozarks is a fully accredited four-year Christian liberal arts college. It is an NAIA school that competes in the Association of Independent Institutions in baseball. Its head baseball coach is Neale Richardson.

Watkins says he plans on pursuing a career in computer information science at College of the Ozarks.

“I want to go into computer networking,” he said. “I think it would be a cool job.”

Watkins expressed thanks to his baseball family for helping him reach the collegiate level.