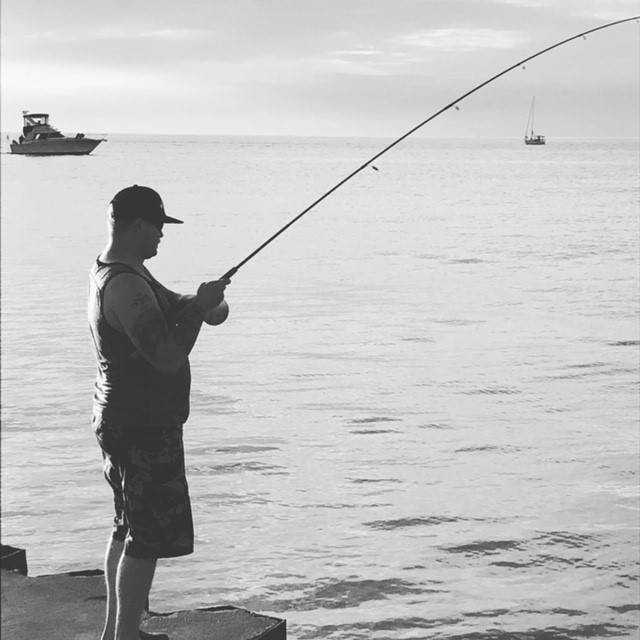 A fisherman reels in his catch off the pier at St. Joseph, Mich. along the shoreline of Lake Michigan.
Tom Davis ~ Tdavis@semoball.com

Arguably the best-known figure from the first Gulf War, the late Army Gen. Norman Schwarzkopf, loved few things more than taking off his combat helmet and putting on a fishing cap, festooned with artificial lures.

The good general apparently was quite the angler in his day.

“What Americans don’t understand is,” Schwarzkopf told People magazine in 1994, “there is no other country in the world where ordinary people can go out and enjoy hunting and fishing.”

Schwarzkopf co-founded an outdoors camp for chronically ill children on 125 acres of wilderness near Orlando, Florida.

“We teach them about hunting and fishing,” said Schwarzkopf, “and how to do them right.”

Schwarzkopf, it may be safely assumed, would not cotton to the way public lands and waterways are sometimes treated.

The word “litter” has a couple of meanings in English.

The definition of local conservationists such as Christopher Kennedy care about has to do with the trash that is left outside.

Only human beings are capable of consciously producing litter, of trashing what many consider a God-created environment, thereby marring its beauty.

“Last year in Missouri,” said Kennedy, regional fisheries supervisor for the Missouri Department of Conservation, “313.79 tons of trash were picked up from Missouri’s streams and rivers.”

If there is any good news about rubbish, it may be how many Missourians have stepped forward to clean it up.

Kennedy is particularly concerned about non-biodegradable plastic products, which he says too often end up inside the tissues of fish.

“I’ve seen plastic bands, the ones that hold a six-pack of beer together, floating in the water,” Kennedy said.

“Fish get trapped inside those (bands) and the (resultant pressure) on their bodies causes deformities,” said the MDC’s Kennedy, who is based in Cape Girardeau.

Missouri, in response to the COVID-19 crisis, is temporarily allowing free fishing without a permit in Missouri through April 15.

“So far, we’ve seen an uptick in fishing year-to-year,” said Kennedy, who admits empirical data have yet to be gathered by MDC.

“If what we’re seeing in Cape County Park North (where local MDC offices are located) is any indication,” he added, “interest in the sport appears to be up.

Police the area for recyclables

For years, MDC has had recycling bins for monofilament lines, what anglers put in the water for fishing.

Such lines often get wrapped around debris, stuck under rocks or lodged in trees and brush.

The lines get left behind when anglers cut them either in frustration or because the tangle is so bad, they have no option.

“In 2019, we had nearly 35 ounces of filament recovery,” said Kennedy, noting the enormous amount of light fishing line it takes to add up to 2.2 pounds.

Recycling bins for the fishing lines are available at every state-maintained lake, including Perry County Lake, Lake Girardeau near Crump, Mo., and Boutin Lake in Trail of Tears Park.

“Birds use fishing line to make nests,” said Kennedy, “not realizing, of course, they’re building their own booby traps with monofilament.

“It’s dangerous for them, even lethal,” he added.

Kennedy explained there is the right way to practice catch-and-release, for those who don’t wish to keep what they snare.

“Don’t jerk the hook out,” said Kennedy, who indicates people who decide to return a fish to the water don’t realize many freshwater creatures, including most sport fish, are quite fragile.

“Leave the hook in, cut the line and return (the fish) to the water,” the north St. Louis native added.

“Try not to throw the fish back in,” Kennedy said, “but slip it into the water by holding on by its lip and supporting the fish’s weight at the stomach.”

“The hook will rot in a week or two and the fish will recover.”

Schwarzkopf told People fishing is about the experience more than anything else.

“I can stand (content) in a crystal stream without another human being around me,” said Schwarzkopf, who died in 2012 at age 78.

“If I never catch a single fish,” the four-star general added, “I can come home and still feel as if I’ve had a wonderful time.”

It sounds as if “Stormin’ Norman” would have known exactly what to do during this coronavirus outbreak.