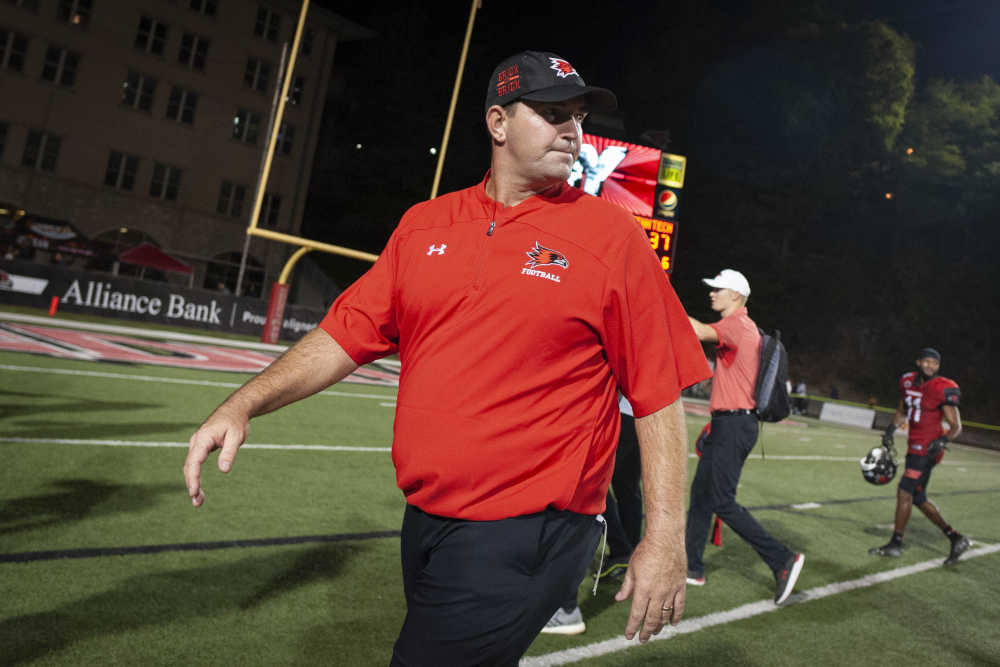 For those fans of the Southeast Missouri State football program that felt the lack of spring football would impede the development of the 2020 version of the Redhawks, those concerns need to have tampered a tad.

While seventh-year coach Tom Matukewicz is not able to get out on the practice field with his players and coaches, to say that the program is not evolving would be inaccurate.

Matukewicz has been conducting “staff meetings through Zoom,” he and his staff have broken down film of the opening three opponents of the 2020 season (Dayton, Ole Miss, and Southern Illinois) and following a two-week break that Matukewicz gave his staff, everyone returned last week and Matukewicz called it a “huge week of recruiting.”

“We put a video out and offered a lot of guys,” Matukewicz said of the recruiting emphasis. “We’re trying to speed our recruiting up a little bit.”

Matukewicz explained that with the success that his program has enjoyed over the past two seasons, he is trying to receive more commitments earlier than in year’s past.

“We’re going to try and knock a lot of stuff out by that early signing date (in December),” Matukewicz said.

Building the future of the program through recruiting is certainly important, but the most intriguing aspect of Matukewicz’s work has been in his mind.

Even though the Redhawks have won more games than any other Ohio Valley Conference program in the past two seasons, Matukewicz is analyzing every aspect of his program and contemplating what needs to be altered.

“I’ve spent most of my day on how and why we do things in our program,” Matukewicz said. “I mean everything.”

It is fascinating that a coach that has built the Southeast program to the highest point in its NCAA Division I history is spending hours researching how to do tasks differently.

“It is allowing me to really take a deep dive into everything we do,” Matukewicz said of the unexpected and prolonged break. “That has been helpful.”

The Redhawks won the 2019 OVC regular-season championship and advanced to the FCS Playoffs for the second consecutive season. However, that didn’t dissuade Matukewicz from adjusting his coaching staff (he has hired four new assistants in the past few months) and he has been re-working the Redhawks’ “program books,” as well.

Matukewicz explained that he has a natural curiosity about things – be them football-related or not - and what makes them successful. So he has enjoyed the opportunity to question everything about his program.

“I’m a natural (thinker) of how things work,” Matukewicz said, “like an engineer. It intrigues me, so I’m always curious why something worked or didn’t work. That is just the way I’ve always kind of been.”