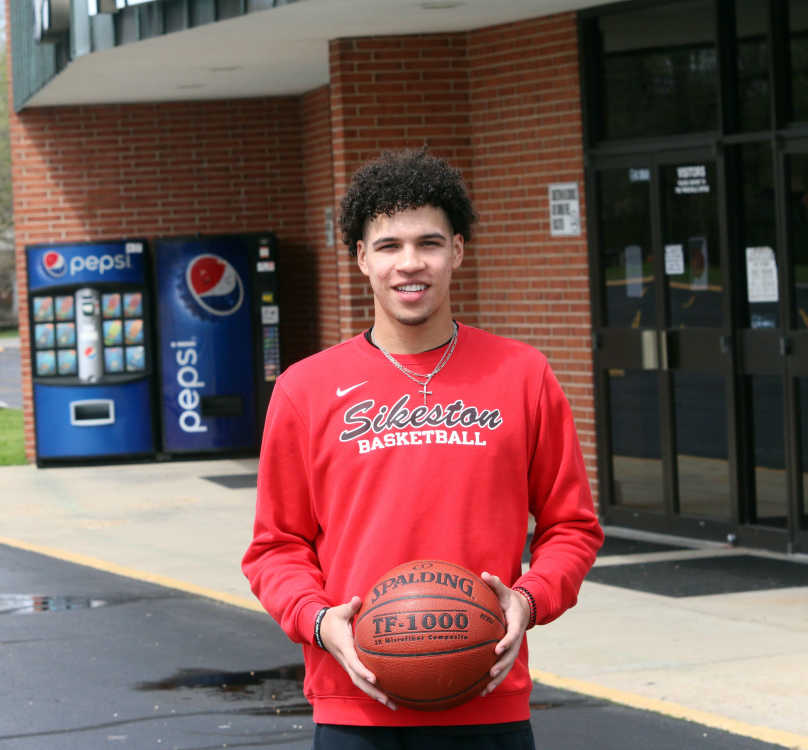 Sikeston's Payton Howard poses for a picture in front of the Sikeston Field House, on Tuesday, March 31, 2020.
Alex Wallner/Standard Democrat

SIKESTON — After a season which saw four all-conference players graduate, a lot of questions surrounded the Sikeston boys’ basketball program on how senior guard Payton Howard was going to perform after a nagging injury toward the end of his junior year that lingered into the offseason.

After it was all said and done, he answered that question with a strong and healthy end to his career on the basketball court.

“He’s just a great player with unselfish tendencies,” Sikeston head coach Gregg Holifield said. “He always looked to make a pass first, but he could also get to the rim, and he could shoot. That’s the one thing that made him such a great player.

“In my opinion, and I’ve said this all year, I think he’s as good as any guard in the state of Missouri. The very reason being that he can defend and can do so many things. He had every tool, and on top of that, he’s such a great kid.”

Heading to St. Louis University to play baseball, Howard had unfinished business on the hardwood, and he made the most of it.

Howard earned Class 4 All-State and Class 4, District 1 All-District honors, to go along with garnering SEMO Conference Player of the Year honors as well.

A Sikeston Bulldog has now won the award in three of the last four years. Poplar Bluff’s Dominique Hardimon earned the accolade after the 2018-2019 season.

Despite Howard not thinking about the award too much, Sikeston head coach Gregg Holifield noticed early on, that he was bound to win it.

“Absolutely,” said Holifield on if he thought Howard would win player of the year honors for the conference. “As a freshman, he played valuable minutes on a really good team. As a sophomore, he helped lead the team to the final four, and as a junior, he helped lead our team to an undefeated regular season. He’s played on great teams, and this year, I thought he was as good as any player. He’s so gifted.”

Heading into the offseason, Howard knew what he had to do.

“I knew I had to step into a bigger role,” Howard said. “Last year, we had four all-conference players, and it was a lot easier for me to play and stuff. But, going into my senior year, I knew I had to step up my game and help contribute differently then I did my junior year.

“He (Holifield) just told me to score. Score whenever I have the ball. He knows that I can play point guard really well, so he told me that everything would pretty much go through you and to just do whatever I can. Just play my game.”

In the end, he took his head coaches’ words and ran with it.

He wasn’t just a scorer, though.

Howard also averaged 3.5 rebounds and 5.6 assists per contest and played in every game.

“I thought I played well,” Howard said. “I didn’t really have any goals going into the season. I just thought I was going to play my game that I’m used to playing. I just wanted to get back to playing like a point guard. More ball-dominant, that’s when I play my best.”

It had been a while since Howard was in the role as the team’s primary scorer.

After two years of watching Fred Thatch Jr. take the bulk of the scoring load, followed by Trey Jenkins, Parker Long, Owen Long, and Kevin Jones his junior year, it was now Howard’s turn to be the primary scorer on every given night.

“My freshman and sophomore year on JV, that’s when I kind of had that role,” Howard said. “So, I was really familiar with it, but taking it to the varsity level, I knew when the twins, Kevin, and Trey left, I knew I was going to have to score a lot. We had a bunch of young guys coming up, and I knew I was capable of scoring a lot, so I just told myself that was what I was going to do.”

It was a winning-filled four years of basketball for Howard. He finished his career with the Bulldogs with a 92-20 record, winning nearly 82 percent of his games.

He now takes that mentality to the diamond — a sport that Howard works on consistently and throughout the summer.

With basketball being his secondary sport, though, Howard said that playing baseball did help him become a better player on the court.

“Baseball is such a dynamic sport,” Howard said. “You have to be really skilled to play baseball, and a lot of people say that baseball players can play any other sport. I think that’s true. All of the training and stuff I do for baseball, all of that ties into basketball too, I’d say.”

Additionally, Holifield said that winning is around him and that he knows that the Billikens are getting a special talent and one that he loved coaching every day.

“He brings that to his team,” said Holifield on Howard’s winning mentality. “And, with a terrific attitude, SLU’s getting a heck of a baseball player. I loved coaching him. As a coach, he’s the kind of guy that you want to be around. His work ethic is outstanding, and just his unselfish play is outstanding.”

Despite trading in sneakers for cleats, Howard said that one thing that he is going to miss the most about basketball is playing at the Field House.

With rivalry games against Charleston and Cape Central in a sold-out Field House, Howard has seen it all.

“When we show up to the Field House before the game, seeing all the fans lined up to the street, and it’s just crazy,” Howard said. “I’d go outside the locker room and look at all the fans waiting to get in the game. It’s awesome.”