Good Sports: The woman who knows everybody, Jane Cooper Stacy 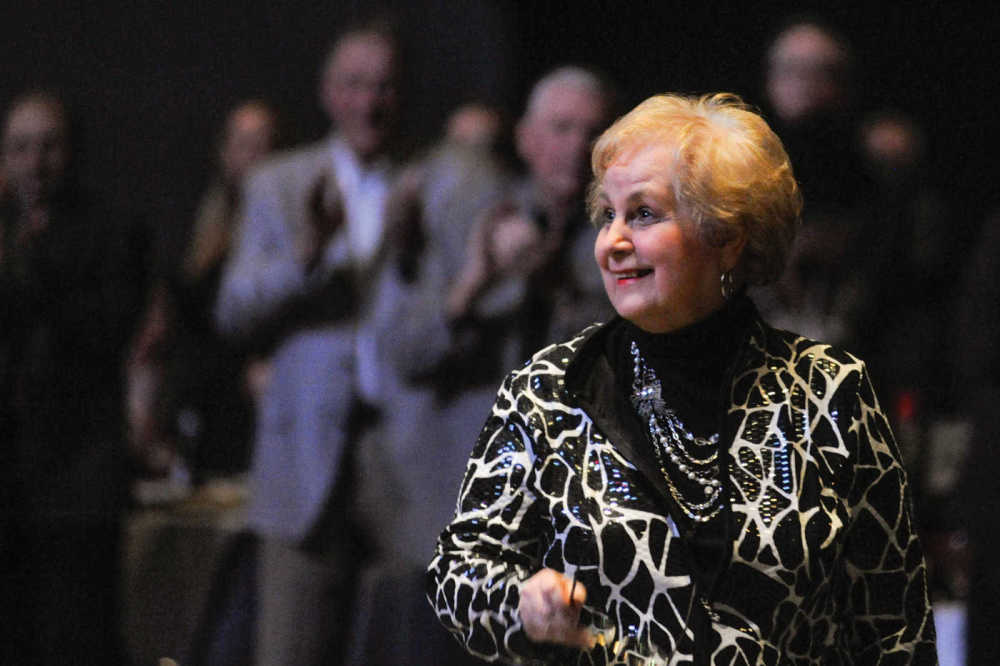 Jane Cooper Stacy makes her way to the stage for her induction into the Southeast Missouri State University Athletics Hall of Fame Friday, Feb. 19, 2016 at the Show Me Center.
Southeast Missourian

Today: Jane Cooper Stacy, 81, (SEMO Class of ’73), is a 2016 inductee in the Southeast Missouri State University Athletics Hall of Fame. She was Southeast’s alumni director, serving 35 years in the position (1973-2008) under a series of university presidents. A Charleston, Mo. native, Stacy is the daughter of a Baptist pastor, and is active in the activities of the Baptist Student Center. She is the former first lady of the university, serving almost 10 years in the role. She is also the sister-in-law of the late Missouri Gov. Warren Hearnes. Stacy, at least until the coronavirus outbreak, was a frequent visitor to many local restaurants. Her meal companions count themselves fortunate if Jane takes a selfie with them and puts it on her Facebook page.

Forgive the impertinence of this first question but you haven’t been a coach or a player. Why are you in the Hall of Fame?

I’ll tell you. The HOF citation does refer to inductees “who have made exceptional contributions to university athletics.” Well, here’s an example of a contribution. I persuaded John Bierk, who taught English at Southeast and who is an avid tennis player, to give the seed money, $25,000, to start the Hall of Fame.

As sports consumers, we who watch the games and matches and meets, we sometimes forget it takes money to make things happen. The university’s development office says you personally have raised $15 million for SEMO.

It’s more than that, actually, but let’s leave it there.

You have described your fundraising prowess as a ministry.

Yes, I can’t separate raising money from ministry. The bottom line is I’m interested in people. Raising money helps people. Yes, fundraising pays for programs and buildings but some of the work I do pays for other things – paying for funeral expenses, for example.

You have been called on to officiate funerals. How many? 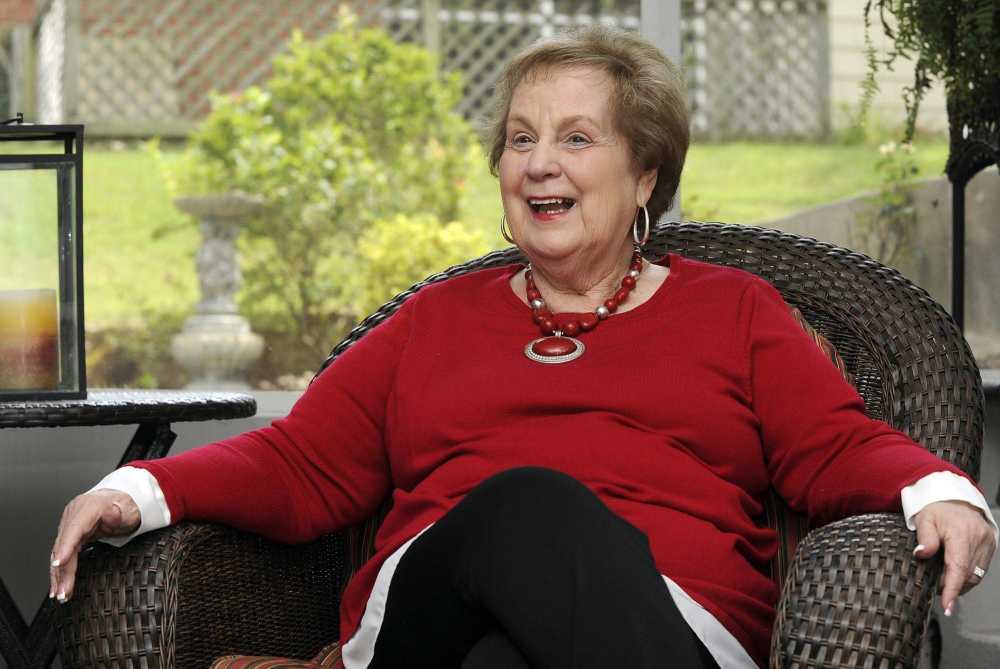 At 80, Jane Stacy is still her father's daughter
Lucas Presson
Some people know Jane Cooper Stacy as the former First Lady of Southeast Missouri State University. To others it's her connection to sister Betty Hearnes (wife of the late Gov. Warren Hearnes). But most know her as the longtime alumni director at Southeast Missouri State, a position she held for 35 years...

Are you a sports fan?

I’m a SEMO fan, mainly. I go to as many games as I can, although at my age I can’t sit in the seats as long now. I really like Rekha (Patterson, SEMO women’s head basketball coach). Coach Tuke (Tom Matukewicz, SEMO head football coach) is perfect for Southeast. He takes care of things and makes everybody feel special. It’s not fakery with him. Sometimes he’ll call me and we’ll get in his truck and talk. He seeks out my opinion. Of course, Tuke’s been successful with two back-to-back OVC championships.

You remain close to a lot of former athletes.

Greg Brune and Dutch Meyr come to mind right away. Sometimes I don’t think those fellas know or care that I’m a woman.

Given your connection to alumni and your ability to fundraise, have you been kept up to speed on a possible capital campaign to replace 90-year old Houck Stadium?

I’ve seen some plans. In my opinion, Southeast has to compete, to use a metaphor, on the same playing field with other schools. But look, money is just part of the equation. Money doesn’t necessarily buy talent. If you’re the head coach, if you can’t spot talent, you’d better have someone on your staff who can.

Your connection to sports goes back to Charleston (Mo.) High School, your alma mater.

I worked in the high school office as a teenager and used to change the grades of athletes so they could compete for the Blue Jays. 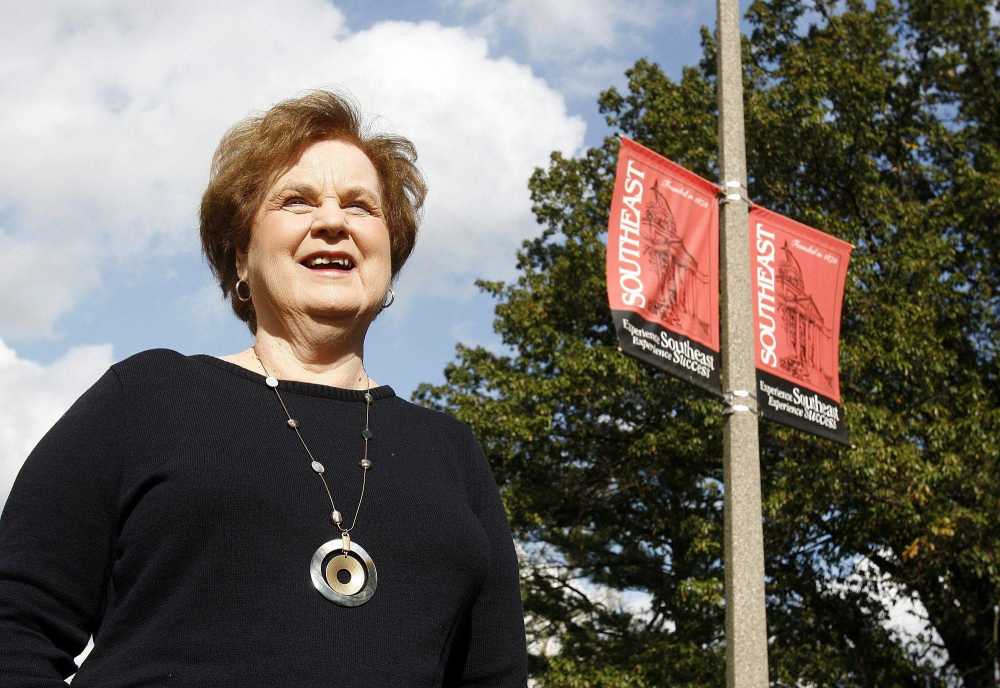 Wait a minute. You changed their grades?

Only the ones for conduct, not their classroom marks. If a student-athlete had an “F” in conduct, I’d change it to a passing grade so he could play. I had a classmate, Ken Weakley, and he graduated with me in 1956 and played football, who introduced me to the team. Through Ken, I became friends with a lot of athletes.

You wrote a book on SEMO’s Hall of Fame.

Yes, I wrote it, paid for it to be printed and gave a bunch of copies to the athletic department. Cindy Gannon (former Southeast assistant athletics director) came to me and asked if I’d pay for a supplement to the book and I did. Nate Saverino and Jeff Honza, who work in the department, tell me they use these resources every day.

I wanted to make sure all the things I knew about Southeast athletics would be remembered.

Tell us about your family.

I’m the youngest of eight. My dad, Rev. A.B. Cooper, taught me everything I know about fundraising. My mom was Mary Lawrence Cooper. I have two sisters still living: Betty Hearnes is 91 and lives in Charleston. I also have a sister in North Carolina, Dr. Rosemarie Jordan, and she is 83.

You smile when you talk about your father.

He was pastor of First Baptist Church in Charleston and was a field representative for the Baptist Student Center, which I continue to support today. Dad was a church planter and builder.

Your children are alive and well and self-isolating right now.

I hope so. I have two sons, Dr. Mark Stacy, dean of the medical school at East Carolina University; and James Franklin Stacy in Madison, Wisconsin, who is a foreman and a builder. My daughter, Sara Stacy Dyer, is retired along with her husband, Dan, and they flip houses today in Nashville. Through my kids, I have five grandchildren and one great-grandchild.

I love him. University presidents who’ve been successful have been the right person at the right time. He is perfect for this time. He listens carefully and I’ve seen him be so kind. (Vargas) doesn’t falter in relationships and he excels in the little things he does. He hasn’t forgotten what it was like for him growing up in Mexico. He told me he once had to eat out of a garbage can. This experience and others, I’m sure, gives him a heart especially for international students who come to SEMO and are strapped financially. 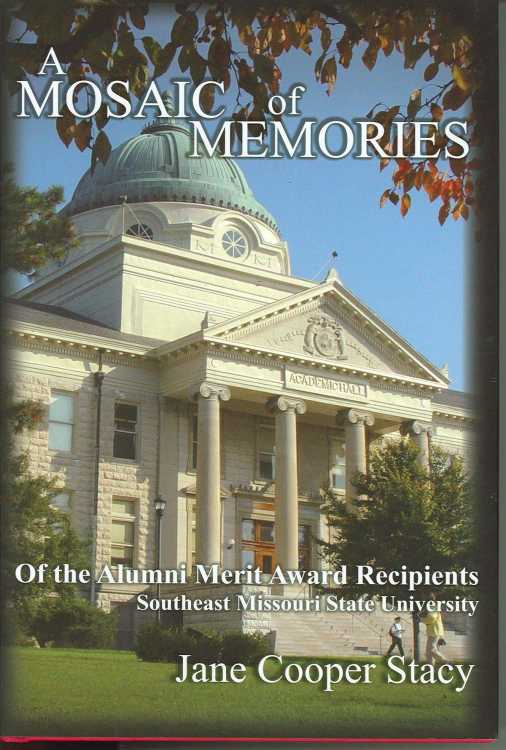 New book highlights Southeast Alumni Merit Award recipients
By Leslie Hazelwood ~ Southeast Missourian
The history of Cape Girardeau cannot be told without including Southeast Missouri State University. Last year part of that history was captured in a book published by the university about its 200 Alumni Merit Award recipients. Though largely a collection of individual stories, the project was organized and edited by Jane Stacy, the former director...
More from this columnist · Jeff Long
Comments
View 3 comments
Note: The nature of the Internet makes it impractical for our staff to review every comment. Please note that those who post comments on this website may do so using a screen name, which may or may not reflect a website user's actual name. Readers should be careful not to assign comments to real people who may have names similar to screen names. Refrain from obscenity in your comments, and to keep discussions civil, don't say anything in a way your grandmother would be ashamed to read.
Respond to this story