Bolen's Capahas are gearing up for their 126th baseball season 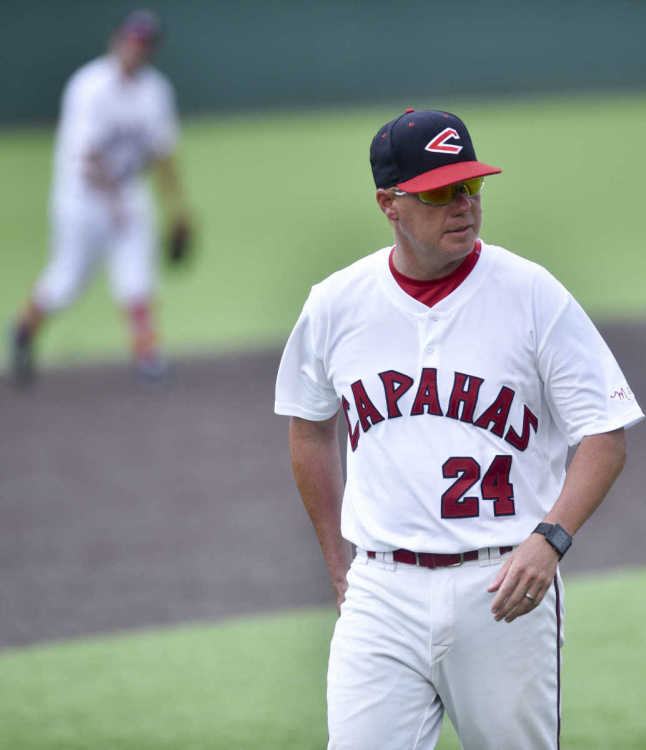 Capahas manager Tom Bolen returns to the dugout after taking the field to protest a call Sunday, July 17, 2018, during a doubleheader against the Fairview Heights Redbirds at Capaha Field.
Ben Matthews ~ bmatthews@semissourian.com

Capahas manager Tom Bolen is bullish about his team’s upcoming 2020 season, no matter when it may start.

“I’m the most excited I’ve ever been about the product we’re going to put into Capahas’ uniforms,” Bolen, 44, said Tuesday.

The Capahas, generally comprised of unpaid college students, are supposed to begin their season May 17 at Capaha Field against Belleville.

“Honestly, given all the (coronavirus) uncertainty,” Bolen said, we’ll probably start the season in June.”

The Capahas have won their division in the Mon-Clair League the past two seasons.

“Our entire starting outfield is coming back,” said Bolen, who is beginning his fourth year as manager since taking over for his legendary father, Jess, following the 2016 campaign.

Pitching also figures to be a bright spot for the team named for the former Ca-Pa-Ha flour company.

“For the first time in my tenure,” Bolen added, “we’ll have three lefties on the hill.”

Bolen says his anticipated 25-man roster has a good mix of collegians from two-year and four-year schools.

“We’ve got two each coming from Mineral Area College and SIU-Edwardsville,” said Bolen, who also expects to have players from Three Rivers, Jefferson College, Williams Baptist, Crowder and Austin Peay.

The Capahas are scheduled to play a 40-game slate, with 26 of the contests interleague competition.

A scaled down league

The Mon-Clair League is down to eight teams from the 10 who competed in 2019, as the Charleston (Mo.) River Dogs and St. Louis Latinos drop off the schedule.

The league’s managers plan an April 20 meeting to discuss how the season is likely to be abbreviated due to COVID-19.

“Every single coach is on the same page,” said Bolen. “We want the safest possible environment for our fans and players.

“We like (Mon-Clair),” says Bolen, “because every (league) team is within a two-and-a-half-hour radius from Cape.”

The closeness of opponents works well for Bolen, who is a 16-year employee of the U.S. Post Office in Cape.

“I was six or seven (years old) when I told Mom and Dad I wanted to manage the Capahas one day,” said Bolen, who manned right field for the team during his playing days.

Financing for the all-volunteer team happens through fundraisers and the start of the Capahas “baseball boosters,” a coalition of ex-players and local businesspeople who pay the bills.

“We no longer play in the National Baseball Congress postseason,” said Bolen, “and it was expensive.

“Not having that cost is a weight off our shoulders.”

Prior to the boosters, the Capahas used to secure a “base” (or major) sponsor to meet expenses.

“We try to stay as local as we can,” Bolen said, “to recruit local talent because so many young men are phenomenal here.”

Should there be a season, which Bolen said he fully expects, Capaha Field will host the Mon-Clair League’s first playoff round on August 8.

The current dormancy of America’s national pastime has hit on all levels.

“I have a 12-year old son, T.J., and his Jackson Tribe season was supposed to begin March 7,” said Bolen. “We’re hoping for a May start now.”

Asked about the complete lack of any competitive sports at the moment, Bolen had a succinct reply.

“We’re all searching to fill a void,” he said.