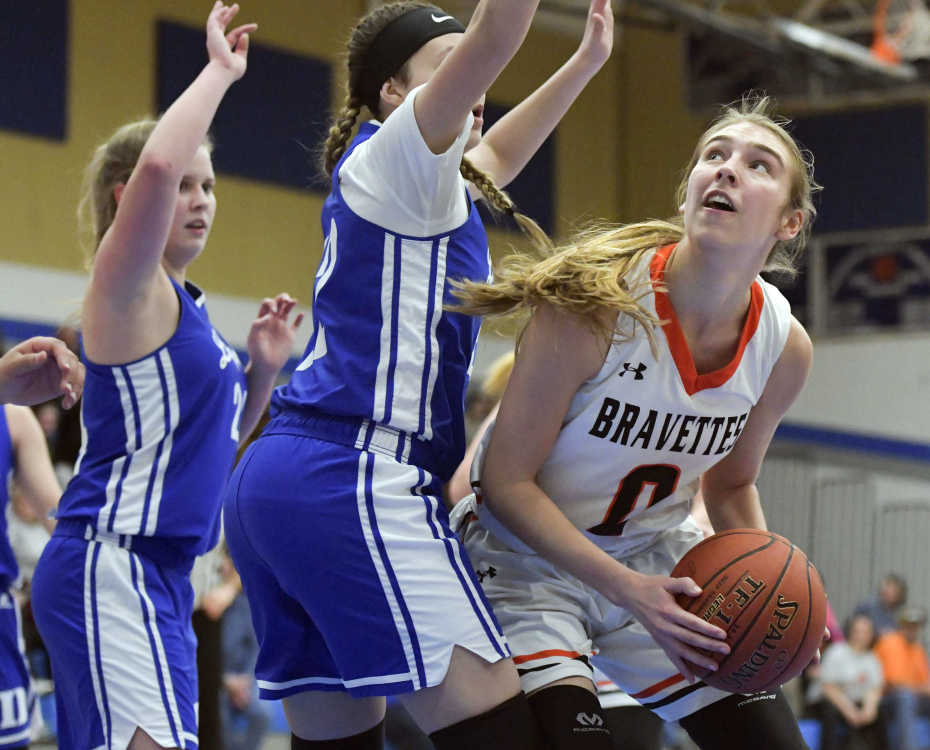 SIKESTON — Below is a list compiled of the Standard-Democrat area’s 12 best girls’ basketball players:

ABOUT HER: An all-around player for the Lady Bulldogs this season, Allen did nearly everything that Sikeston asked her to do. She averaged 15.6 points per game, on 45.8 percent shooting, grabbed 8.6 rebounds, and dished out 4.7 assists per game. She was an asset on the defensive side of the court as well, with 4.7 steals and 1.9 blocks per game averages. “Karris had a great season,” Sikeston head coach Alisha Wills said. “She is a very smart player and sees the floor incredibly well. Karris has basketball intelligence and a keen eye for the game. She can see things happen before a play happens. Karris helped orchestrate a lot of what happened on the floor for us with her foresight. She led the team in assists and often tried to include her teammates in the scoring column. I anticipate her continuing to be a great asset for our team and look froward to what the future holds.” Allen earned Class 4, District 1 All-District accolades, and was an honorable mention for the SEMO Conference All-Conference team. 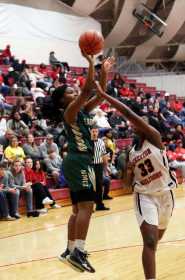 ABOUT HER: Ruff averaged 12.6 points per contest for the Lady Eagles this season. She also grabbed 3.5 rebounds, dished out three assists, and provided excellent defense, with nearly four steals per game (3.9) as well. Ruff’s 102 steals also set the sing-season school record at New Madrid County Central. “Yannie got off to a rough start this year,” NMCC head coach Toby Heeb said. “She struggled early in the year. I think it was the first time in her life where she had a bad game more than once. I was on her a lot during games and practice about just getting better. During the holiday tournament, she started to turn it up. She had a good game against Neelyville that kind of reminded us all, including herself, of what she can do. She has the ball in her hands a lot, which leads to a lot of pressure on her. I think throughout the year, she learned how to handle that and how to get her teammates involved more.” Ruff earned Class 3, District 1 All-District honors this season. 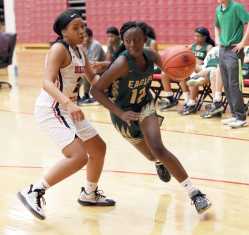 ABOUT HER: Wright led the Lady Eagles in points, at 16.3, this season. She also averaged 6.4 rebounds, and her defense was also a plus, as shown by her 3.1 steals per game. Additionally, she also provided range from deep, by shooting 33.3 from 3 in her junior season. “I thought Shay had a terrific season and stepped up right from the beginning in Alivia’s absence,” Heeb said. “At the end of the 2018-19 season, a question moving forward was, ‘Who’s going to replace Alexis Phillips?’ Shay worked hard in the summer, and that question soon became who’s going to replace Shay in that sixth man role. She was the one we knew we could go to when we needed a bucket and would also come up with the big plays on defense or get the big rebound. My favorite thing about Shay is that she’s a gamer. It doesn’t matter who you are playing or where; you can count on her to show up and compete.” Wright earned Class 3, District 1 All-District honors this season. 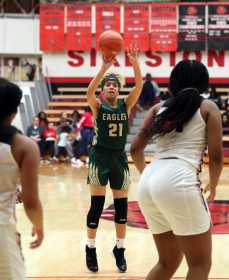 ABOUT HER: After starting the season in the way she wanted, Hartman rebounded well when she returned from her injury that she suffered in the offseason. She averaged 15 points per game — scoring 226 points in 15 games played — and neared a double-double, with 9.5 rebounds per contest. She also added 1.9 steals. “I couldn’t be more proud of the season Alivia Hartman had,” Heeb said. “There were big expectations for her after being all-state as a sophomore. She had a great summer. Unfortunately, she had surgery on her shoulder, which had her sidelined for the first half of the season. She never missed a practice during that time and did everything she could during practice that didn’t involve her arms. She showed a lot of discipline during that time. When she got cleared to play, she had a bumpy start. Those first couple of weeks were hard on her mentally and physically. But, as good players do, she kept working and learning from what she wasn’t doing good. When Alivia is on the floor, it makes everyone on the team better. She’s a leader on-and-off the court, and this season showed that more than anything.” Hartman earned Class 3, District 1 All-District honors this season. 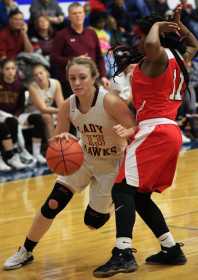 ABOUT HER: Moore averaged 20.4 points per game and 12.9 rebounds for the Lady Hawks this season. “Alaney embodies what a student-athlete should be,” Kelly head coach Darrin Pruitt said. “As a multi-sport athlete, she is competitive and is always asking just a little more of herself. Every event, whether practice or contest, she works hard to meet or exceed expectations set by the team, her coaches, and herself. In the class, she is no different as she achieves success in her coursework and accepts only her best effort.” Moore earned Class 3, District 2 All-District and was the co-Scott-Mississippi County Conference Player of the Year as well. 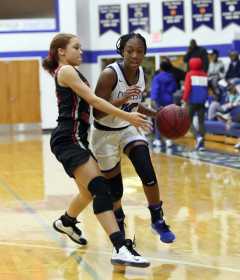 ABOUT HER: Jones averaged 18 points per game last season and eight assists. She also added a boost on the defensive end of the floor for the Bluejays, with five steals. She shot 57 percent from the floor, 48 percent from 3, and 90 percent from the free-throw line. “She never gave up,” Charleston head coach Dollette Hall said. “She never looked down on herself or the team or even her coaches. She was never down about anything. As the season started, we had a full team, and she was that leader that helped and pushed her teammates because she wanted everyone to get better. It was always working hard in practice. Even after practice, she would stay at least another 45 minutes to an hour and work on her shot. She was determined.” Jones earned Class 3, District 2 All-District, and Scott-Mississippi County Conference All-Conference honors this season. 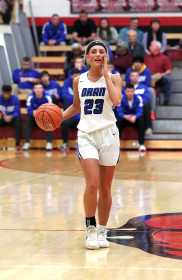 ABOUT HER: Payne averaged 14.6 points per game this season, to go along with 5.4 rebounds, and 4.1 assists. She shot 43 percent from the floor and helped lead the Lady Eagles to its second state semifinal appearance in four years. Against East Buchanan, in the semifinals, Payne finished with five points, three rebounds, two assists, and two steals in 31 minutes. “We played a lot of games where she could have averaged more points, but there were several games that we played in, where we ended up getting big leads,” Oran head coach Larry Boshell said. “They didn’t play half of the third or any of the fourth quarters. She stepped up, and she handled her role well — accepted it. She became a floor general for us; scored when needed but also looked to dish. She passed the ball a lot, which made us a better team overall.” Payne is signed to play college softball at Southeast Missouri State next spring. She earned Class 2 All-State and Class 2, District 3 All-District honors, and was the co-Scott-Mississippi County Conference Player of the Year as well.

ABOUT HER: Webb neared a double-double for Oran this season. She averaged 15.4 points and 7.8 rebounds per game and shot 63 percent from the floor as well. Against East Buchanan, in the semifinals, Webb finished with 13 points and six rebounds in 32 minutes. “Katie got better as the year went on,” Boshell said. “She stepped up big several times for us, none bigger than the quarterfinal game. What people don’t look at are all of the rebounds she got and the fact that she busted her butt to get down the floor where she got fouled and shoot those free throws.” She earned Class 2 All-State, Class 2, District 3, and Scott-Mississippi County Conference All-Conference honors this season.

ABOUT HER: It was a strong season for Coffee. However, toward the end of the year, a nagging injury limited the way she usually plays, leaving a void in the Scott County Central lineup. She led the Bravettes in points (20.2) and rebounds (12.3). She also shot 45 percent from the floor, dished out three assists, and had 2.2 steals per contest as well. “When you got a kid that’s averaging 21 and right at 13; she did it all for us,” Scott County Central head coach Andrew Pullen said. Coffee earned Class 1, District 2 All-District, and Scott-Mississippi County Conference All-Conference honors this season. 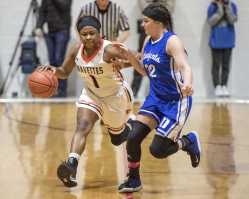 ABOUT HER: Jones averaged 15.4 points per game, six rebounds, and 4.5 assists this season for the Bravettes. She also chipped in with 3.7 steals and shot 40 percent from the floor and 30 percent from 3. “She improved a lot,” Pullen said. “She went from a shooting guard to a point guard, and I think she can play JUCO, DII, or DIII point guard right now.” Jones earned Class 1, District 2 All-District, and Scott-Mississippi County Conference All-Conference honors this season. 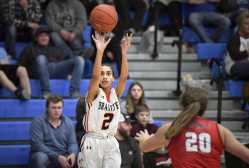 ABOUT HER: Adams was the second-leading scorer on the team at 17.2 points per contest. She shot 44 percent from the floor and added four rebounds, two assists, and 3.5 steals per game. “Micah improved the most out of everybody,” Pullen said. “She’s still got a lot of improving to do, but as a sophomore, she came a long way.” Adams earned Class 1, District 2 All-District, and was an honorable mention for the Scott-Mississippi County Conference All-Conference team.

ABOUT HER: Madison averaged a double-double this season for the Bulldogs, with 15.1 points and 10.5 rebounds per contest. She was also a plus on defense, with 2.3 steals and one block per contest as well. “I was very proud of the way Garielle stepped into her new role for us this season,” Portageville head coach Kellye Fowler said. “We needed her to score and rebound consistently and she did just that. We had seen what she could do in spurts in her previous seasons but this year she performed night-in and night-out and led our team in almost every category. She also showed that she could be a leader on-and-off the court. She is a great kid and a lot of my underclassmen really looked up to her.” Madison earned Class 2, District 1 All-District, and Bootheel Conference All-Conference honors this season.