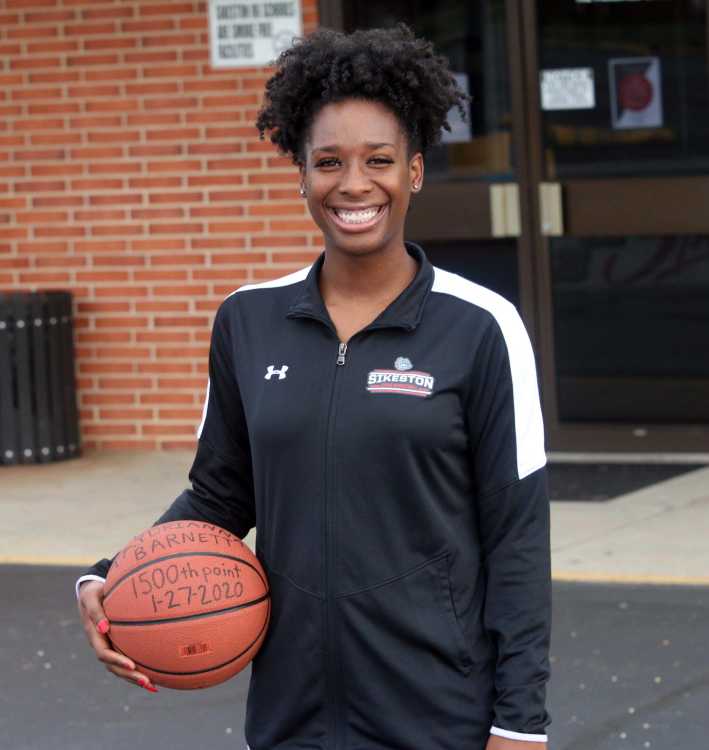 Sikeston's Taydrianna Barnett poses for a picture in front of the Sikeston Field House, on Friday, March 27, 2020.
Alex Wallner/Standard Democrat

One thousand seven hundred sixty-seven to be exact.

That mark earned Barnett Class 4, District 1 All-District, and SEMO Conference All-Conference honors. She is also the 2020 Girls’ Standard-Democrat Player of the Year.

Overall, the numbers speak for themselves.

“I went out strong my senior season, Barnett said. “I started a little rough, but that’s because I’m normally out-of-shape. As the season went on, I caught on, and I’ve gotten better and better. My teammates worked me as hard as I should be to get me to where I’m at now.”

In her senior season, Barnett nearly averaged a double-double. She finished with 22.8 points per contest and 8.3 rebounds.

Additionally, Barnett also shot 50.1 percent from the floor, dished out 2.7 assists, and 2.5 steals.

Heading into her senior season, though, the one goal she wanted to meet — and exceed — the most was her free throw percentage.

“My goal was to get my free throw percentage up,” Barnett said. “It’s been in the 40s like it was really bad. I could not make a free throw to save my life. But then, Coach Sarakas (Sikeston boys’ assistant coach) would help me with my moves, my dribbling. That was my main goal because I like to take the ball to the hoop, and then when I do that, I get fouled, and I miss free throws.”

Barnett improved her percentage every season.

As a freshman, she shot 49.2 percent from the charity stripe. Then, as a junior, she upped her percentage by nearly 11 percent, at 61.8.

Barnett’s senior campaign also ended in an uptick at the foul line, where she improved by three percent, at 64.5.

For a player that consistently is always in attack-mode, improving in that area was a must. Altogether, she knows her game and how to help her team win.

She also never wants to come off the court and said that is due to, not only, her aggressiveness, but her general love for the sport.

“All of my anger, I take it out on the court, and I leave everything on the court,” Barnett said. “So, that makes me want to keep going. I also know that I’m a very good player, and I never want to get off the court because basketball is my game, and it’s fun.”

Teams always knew what they were getting when they went up against Sikeston, and Barnett.

Despite knowing what she brought to the table, opponents still struggled to stop her in the end.

“Taydrianna is such a driver,” Sikeston head coach Alisha Wills said. “She’s a driving force, and she never lets anything stand in her way. Even when she got double-teamed at times, she still is going to — when the ball is in her hands — find a way to get to the basket. That’s what made her such an asset to our team. She’s just relentless. When she gets the ball, she’s going to drive to the hole, and she’s going to get there one way or the other.”

It was a season filled with its share of ups and downs.

Even with all of that, though, Wills said that Barnett never changed her attitude or her mindset.

“One thing about Taydrianna is she always has a positive outlook,” Wills said. “Always upbeat when it comes to games and practices. She wasn’t so much a verbal leader, as she was a leader with her ability on the floor, and doing something with the basketball in her hands. I think she set more of an example and more of a tone when she did that. Especially when she and a couple of the others would get into an offensive set together.

“One way or another, she was going to do something, and I think that’s something that the girls look at; when Tay has the ball, she’s going to do something, and I think some of them have learned, ‘I can go to the basket, I can be like Tay and drive the ball in.’ That’s the one thing that I want the younger kids to take away from her. Once you got the ball, do something with it, whether it’s passing it, rebounding, shooting, whatever, find a way to be a threat with the ball.”

Offensively, the ball had to go through Barnett for the team to be successful.

The main reason why was because Wills knew every time she touched the ball, she would make something happen.

“Whether it was driving it to the basket herself, or finding someone else and trying to dish it off,” Wills said. “She was also a key rebounder for us. One way or the other, if the ball is in her hands, she’s going to find something to do with it. You have to have that in an offense.”

Playing in every game this season, Barnett rarely had an off-night.

However, Wills did say that once the district tournament came around, she dealt with a back injury that caused her some pain.

“Her last game was a tough one on her,” Wills said. “She came in with the back pain and stuff. She still tried and did what she could, but the first time she saw a double-team this season, it stifled her a little bit. We didn’t see it a lot. She didn’t see it a lot in her junior year. The first time she did see it, she made adjustments and recovered from it. It was very rare that she struggled with it because she was going to find a way to get open and get the ball to the hole.”

The nagging injury started against Dexter in the first round, but it didn’t halt Barnett too much, as she wound up scoring 37 points.

A matchup against Ste. Genevieve in the semifinals was the one game that hurt her the most. Barnett finished with 17 points in the contest.

“It was bothering her then, but it wasn’t to the extreme that it was that last game against Ste. Genevieve,” Wills said. “It had been something that was nagging at her for a week or so. But, it just gradually got worse. She went to the chiropractor that morning before we played Ste. Genevieve and tried to get some relief so that she could play.”

Moving to next season, Sikeston will not only be without its leading scorer but a player that never showed signs of wavering.

However, every player graduates and Wills knows that someone else is going to have to step up in Barnett’s absence.

Now facing the challenge of playing at a level with equal talent, Barnett said that she hopes to gain more attention with her play.

“I am looking forward to, possibly, other colleges looking at me, and getting better,” Barnett said. “I know that they have a whole lot of girls up there that have records right now — charges and steals — and their defense is really good. Hopefully, I progress while I’m up there.”