The year Southeast lost the links

The year Southeast lost the links 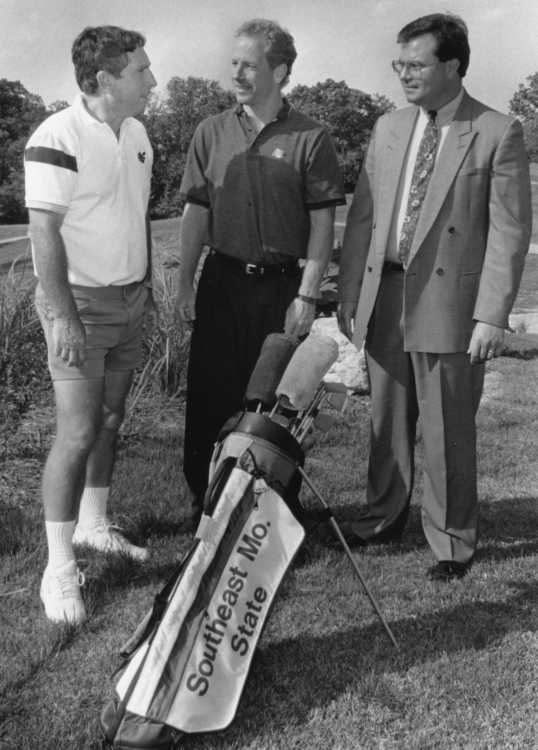 Carroll Williams is wistful about his long tenure as head coach of the Southeast men’s golf program, ended by the university’s board of regents 15 years ago this spring.

“All told, I coached golf at SEMO for 30 years,” Williams said.

Williams, 82, is principal of Cape Christian Community School these days, which will be absorbed July 1 by Lynwood Christian Academy.

With all spring sports currently under suspension by order of the Ohio Valley Conference, Williams recalled his feelings when Southeast golf was shut down in 2005.

“Very disappointed,” said Williams, whose long association with Southeast dates to his freshman year on campus in 1955.

“Changes in the athletic department had been bandied about for some time,” Williams said, “but I didn’t see (golf’s discontinuation) coming.”

Williams had a series of jobs at Southeast, seven or eight by his count.

Among his posts: in 1975-81, Williams was head men’s basketball coach.

Southeast cut golf once before, in 1975, only to bring it back again 1990, shortly before Southeast went to Division 1 status.

During the second iteration of the program, Williams said only one student-athlete left the university.

“Our kids really didn’t transfer until (Southeast) cancelled golf in ’05,” said Williams, who notes his golfers performed well not only on the links but in the classroom.

According to an article in the Southeast Missourian, eliminating golf was expected to save the university $35,000.

“What I discovered after the decision was made,” Williams said, “is that the athletics department used to get $18,000 from the NCAA just for having Div. 1 golf at the school.

“When you figure in the fundraising we were doing for the program, we were close to breaking even.

“It was a hard blow to take,” Williams added.

SEMO athletics have come a long way since the early 1900s, when the university had only football and men’s basketball.

“(SEMO) needed to get women’s athletics better funded (in 2005),” said Williams, who nevertheless believes adherence to Title IX guidelines was not the main reason men’s golf irrevocably landed in a sand trap.

More funding for a revenue sport

The longtime coach, having skippered hoops and serving as an A.D. himself, understood the cash-strapped regents had decisions to make.

“You take out golf and you can create another scholarship for basketball,” Williams said.

Williams said he had been frugal with university money.

“No one had anything more than half a scholarship,” said Williams, revealing a maximum of six student golfers received between $2,500-$3,000 a year.

Jason Owen, Southeast ’00 graduate, is arguably the most accomplished golfer SEMO has ever produced.

Some of Owen’s university records include: lowest season scoring average, 71; most career collegiate tournaments won, 7; most wins in a single season, 4.

Owen was also a three-time MVP of the Southeast squad and a three-time Ohio Valley all-conference team selection.

Most recently, Owen played a PGA tour event in August 2018.

He is the men’s golf coach and golf director at California State Monterey Bay, where he has been employed since 2008.

Officially, Southeast golf was phased out in the spring of 2005 but the decision to end the program was made months earlier.

In November 2004, the regents, during the tenure of former Southeast president Dr. Ken Dobbins, also unanimously ordered other significant reductions.

Among them: some faculty cuts in geography, physics, sociology, philosophy, agriculture, geosciences and economics.

In the long history of Southeast, other sports have joined golf on the scrap heap: women’s field hockey, wrestling, men’s soccer, men’s tennis and men’s and women’s swimming.

For the octogenarian Williams, golf’s elimination didn’t hurt him personally in the pocketbook.

“No, it wasn’t as if I was fired,” Williams said of the 2005 regents’ decision. “I retired from teaching in 1996, so, not having to actually let me go may have been part of (their) thinking.

“It was a great experience, coaching golf,” said Williams, “even though they dropped it.”