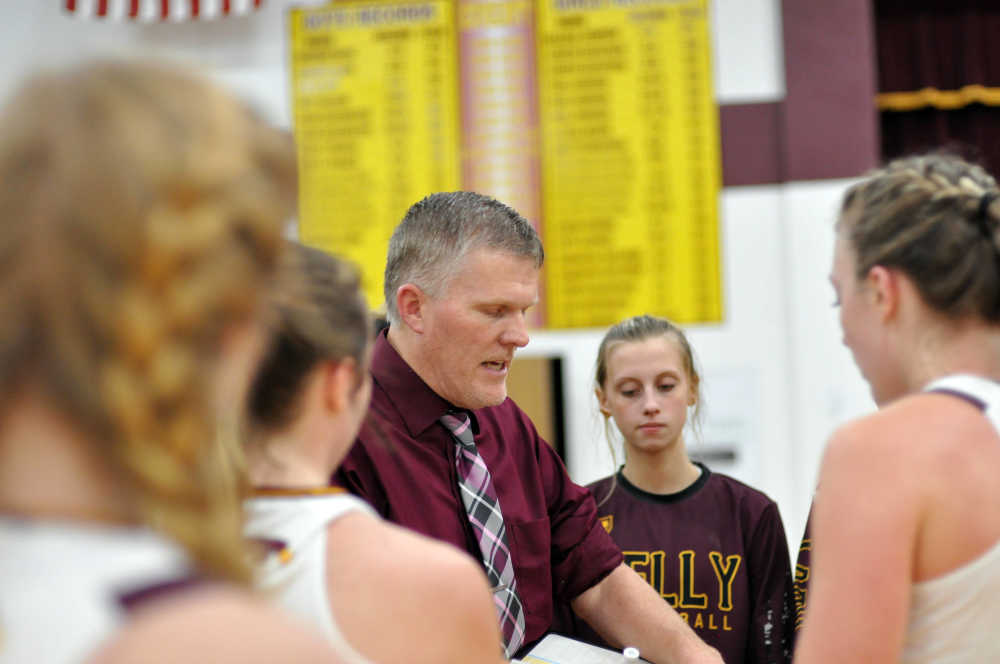 “Any recognition by your peers is a good day,” Pruitt said. “I believe that every coach works hard to develop their players. But, honestly, the recognition goes to the team. I was fortunate to come into the Lady Hawks program, where there have always been talented student-athletes. Me receiving this award is an acknowledgment of how talented they are.”

Kelly didn’t start the season quite as planned, as it entered January with a 6-5 record.

However, the Lady Hawks never seemed to be out of a game. Of its five losses, four of the five came by five points or less.

In the Chaffee Lady Devils Tournament, the Lady Hawks fell in overtime to Scott City, 57-55, and lost it’s next game to Delta, 56-54.

However, Kelly rebounded after that.

At the Twin Rivers Lady Royals Classic, the Lady Hawks lost their opening round game to New Madrid County Central, 52-47, in overtime, before stringing together three-consecutive wins to earn the consolation championship.

Then, in a matter of two weeks toward the end of January, Kelly defeated Scott City twice.

The first win came in a regular-season matchup, with the Lady Hawks winning 78-54 at home, while the second came in the Scott-Mississippi County Conference Tournament. Kelly won 60-41 to earn another consolation championship — the second of the season.

The Lady Hawks did fall in the first round of the district tournament, though, to Fredericktown 66-58.

The dream is still to reach a state final with his team, and an early exit this past season doesn’t change Pruitt’s mind in the least.

“Just like teachers who hope every kid in their class makes A’s, I believe every coach hopes to get to the state finals, and I am no different,” Pruitt said. “I go every year, but I want to go with my team. My daily goal is for every player on my team to work hard, make their teammates better in practice, and be competitive in games. My ultimate goal is to build a culture of expectations that the players want to be a part of and relationships that teammates can count on. Nothing is handed to you, and if you love it, you will find a way to be successful at it.”

In the end, coaching is in Pruitt’s blood.

Most notably, what he loves the most are the challenges that come with the position.

“As a coach, when you see players working hard, outside practices, and in the offseason to get better, it makes you want to work harder for them,” Pruitt said. “I love seeing a player put in the time, then one day it just clicks. You see, their game and confidence elevate. It gives you a feeling of accomplishment.”

Before Kelly, Pruitt spent five years as the head coach at Chaffee.

Getting into basketball, though, started at a much younger age.

“I grew up loving to play basketball, but I never played on an organized team,” Pruitt said. “The only team sport I played was baseball when I was younger. My first team was coaching a group of third and fourth-grade girls that my daughter played on, then AAU teams, and in 2008 Sam Sides gave me an opportunity as his assistant at Saxony Lutheran.”